Potted cilantro plant falling over outside. What am I doing wrong?

It’s not standing up straight and the ends look very fragile. I’m not sure if I should try to repot it and add more soil. The pot is 12.5 inches.

The pot is draining and I am careful not to overwater it.

The pot is outside with direct sunlight only in the afternoon hours. 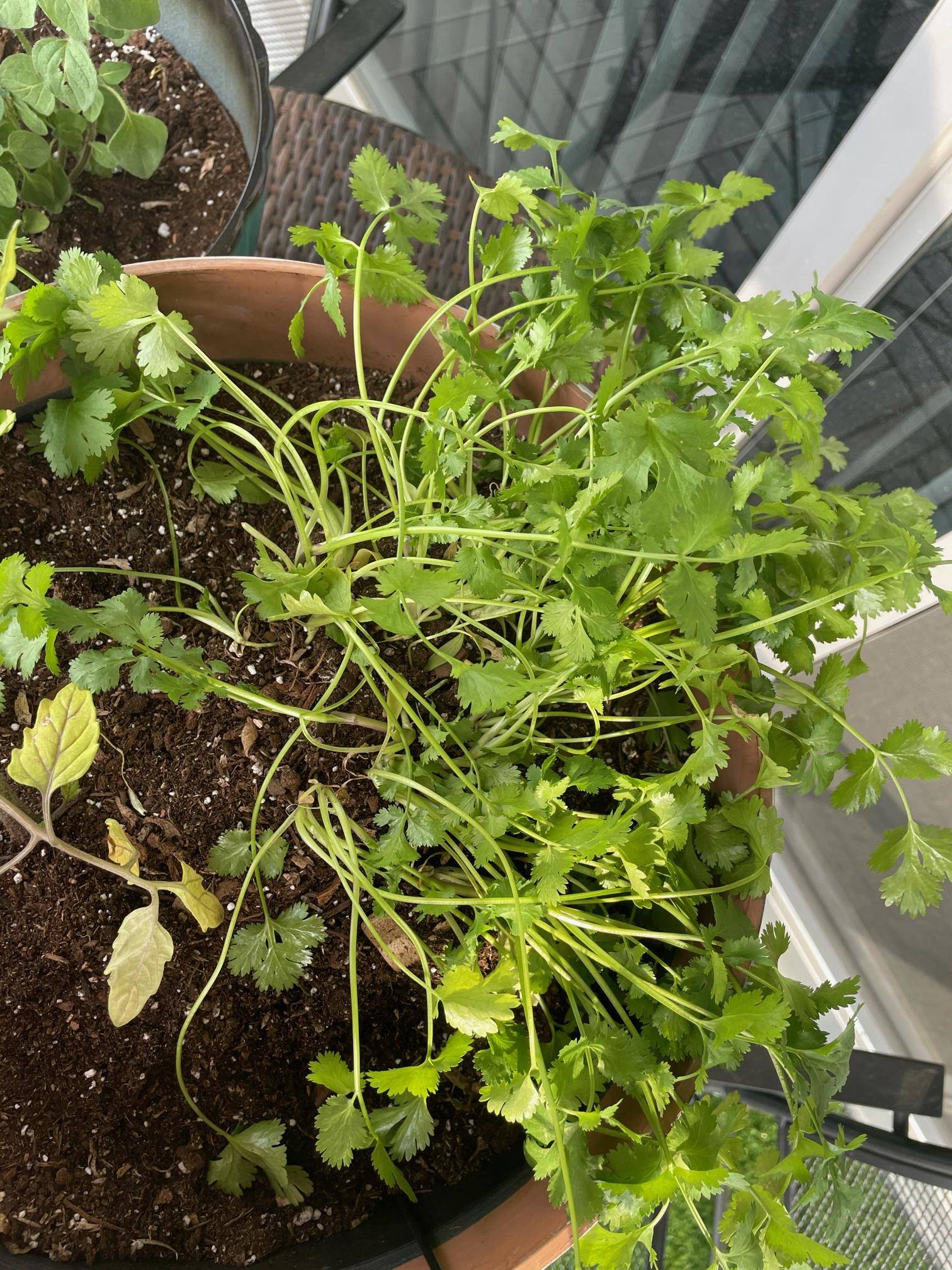 The cilantro natural habit is to grow a low, compact rosette of leaves with short leaf stems and then when mature send up a taller flowering spike with flowers and then seed. When it produces growth as in the picture it is saying it needs more light, lots more light and perhaps less water and nutrient, so let it dry down occasionally. You can achieve both by moving it, a little at a time, into a much sunnier location.

The pictured plant doesn't look ideal, but it also still looks relatively healthy and I would not be terribly concerned based on that picture. Cilantro tends to have thin, delicate leaves, and the lower leaves tend to sprawl out, as do the basal leaves of most plants in that family.

That said, the plant looks a little "leggy", i.e. elongated stems and a lot of stem relative to leaf, which is often a sign that it's not getting enough light, and it's trying to grow taller or sprawl farther to reach more light. This can also be a product of too much water and nutrients. I would not repot it because I don't see any sign that it is rootbound and that pot looks more than big enough for the amount of leaf there is.

I find cilantro is tricky to grow well in low-light conditions; it can be done but you get a lot less yield and the plant tends to grow with a leggy habit. I also find it tends to do better in slightly poorer, low-nutrient soils, particularly slightly sandy ones. In Delaware I have clay-loam soils that are very high in nutrients, and it's always hard for me to grow even in full sun, and it does not compete well with weeds or other garden plants. When I've visited people farther south and west who have sandier, lower-nutrient soils they often seem to have better luck with it. Commercially, cilantro is grown mostly in central to southern California along the coast, and it's also grown in warmer places like Texas and widely in Mexico. So, if you're farther north than this, you probably are out of its ideal range and it's never going to be a star performer.

If I were you, I'd settle for what you have, unless you have a way to move it into more light. If you're stuck with having the pot on a deck, move it to the sunniest spot on the deck, if it's not already there.

Lastly, don't be afraid to harvest it actively. Especially if it's being grown in high-nutrient conditions with adequate moisture, it may start producing more leaf if you start harvesting it regularly. I usually start harvesting mine when I have about as much leaf as in the picture. Enjoy!

Not the answer you're looking for? Browse other questions tagged containers repotting wilt cilantro or ask your own question.

6
What is this black bug, how to control?
5
What is this white furry-looking mold in my potted plants?
2
How can I care for my euonymus japonicus president gauthier?
1
My olive tree's leaves have dried out but bottom of trunk is sprouting. What should I do?
1
Avocado plant wilting
0
New plumeria cutting
1
How should I stop my cilantro plant from falling over?
1
Edelweiss not doing well, looking for care tips