I have a sponge plant (Luffa cylindrica) growing in my garden, four or five months old. It looks fine and quite healthy and a month ago has begun to make flowers.

Each flower stays open for about a day, during the end of that period it withers. That seems normal. But unfortunately, afterwards (in about a couple days) the fruit gradually become paler and lose vigor, culminating in its tearing off from the plant.

This has happened to all its fruits so far and I have no idea what is going on.

Although there are always small ants in the plant, I have never seen any ant trying to cut any part of it. They seem rather to be feed on some sugar droplets on the stem and thus it looks like harmless symbiosis.

Here are pictures, one of the leaves and another of a initially developing fruit that later broke off, the rupture site circled in red. 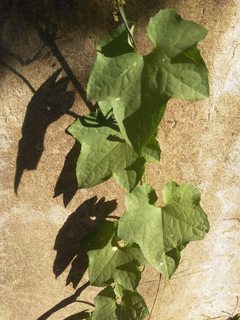 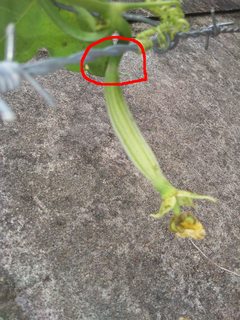 Any help in figuring out what's going wrong is much appreciated. I'm also glad to include more details or pictures if needed.

diagnosis fruit-drop
Share
Improve this question
asked May 18 at 18:09

I have grown luffa many years. First, always ants visiting, crawling all over doing no harm. Second, the vines like heat and produce male and female flowers separately. They are very distinctive if you examine the flower parts carefully (see images here). You need one of each sex open at the same time and a flying insect to transfer pollen from male to female. Then you get luffa gourds.

Some reasons for rejection of female flowers might be: too cold (happy in 25-35 C), not enough vines to produce enough flowers of both sexes open at the same time (short life span of pollen), high or dry wind that interferes with delicate flowers against wire and other climbing frames, lack of pollinator insects (try hand pollination).

I have always grown about 4 large pots each containing about 4 vines all climbing on the same frame. Once summer heat arrives I get about 30 mature gourds from those 16 vines. Some years better, some worse.

The flowers bloom in an orderly progression as the vine lengthens. Typically there is a larger solitary female flower on a thick stem and a thinner stem with a cluster of male flowers. (...) Some female flowers will wilt and fall off while the pollinated ones will form a luffa seed pod. The male flowers fall off after they bloom in sequence up the stalk.

So I suppose and hope the flowers that fell off are male or not-polinated females.

The photos/video section pictures the difference between female and male flowers.

Not the answer you're looking for? Browse other questions tagged diagnosis fruit-drop or ask your own question.

18
Why hasn't my strawberry plant produced any fruit?
4
Why didn't my Meyer Lemon tree produce fruit after it blossomed?
4
How can I stop my Ficus from dropping small pea-sized fruit?
9
Fig fruit fell off before ripe
2
Why did the leaves of my pepper plant become partly white after transplanting?
2
What to do with fallen fruit?
3
Plum tree set fruit but now it's all gone
2
Sansevieria (Snake Plant) mother plant dyeing after new rhizome bud