What is this awful leafy plant that's taking over my lawn, and how to get rid of it?

Over the last few years, an aggressive, leafy weed has gradually taken over the grass of my back yard in Northern California. It spreads its roots horizontally and occasionally sprouts up purple flowers on a short stalk. It smothers and outcompetes the grass in areas where it grows. 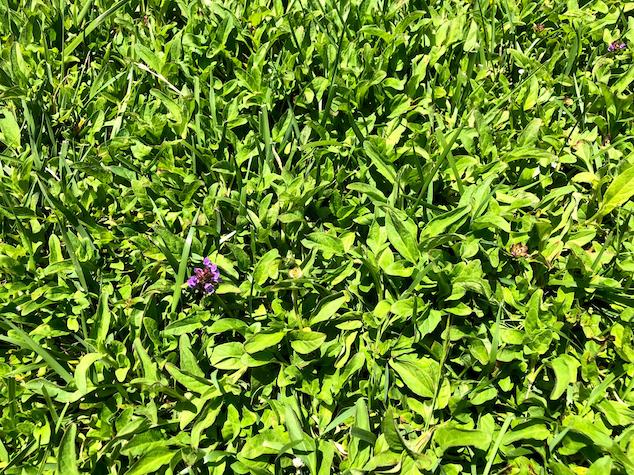 Here's a close-up photo of the flowers: 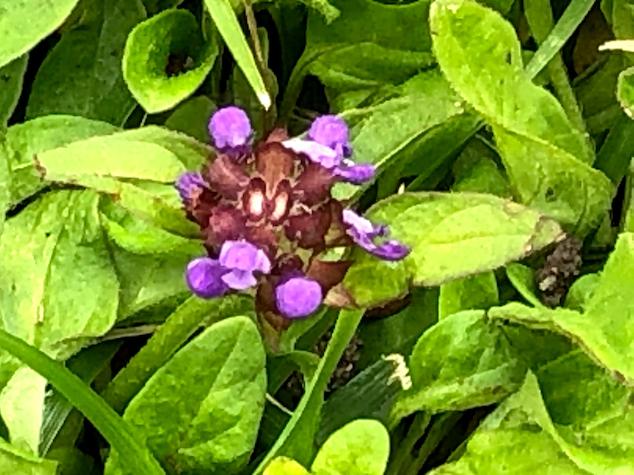 And here's the plants growing back a few weeks after I thought I'd ripped them out by the roots. 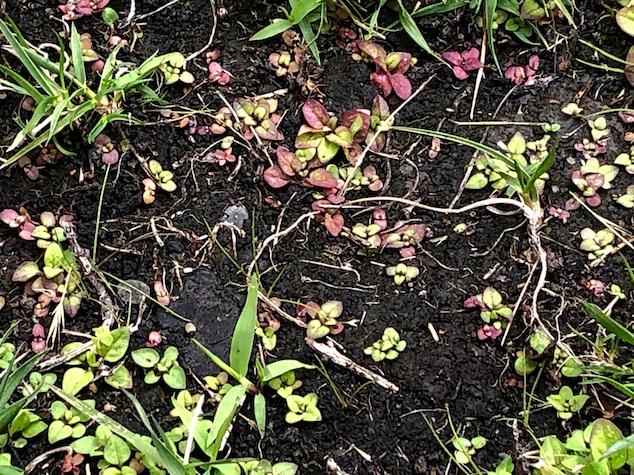 I've never seen this plant anywhere else other than our back yard. No idea how it got there, but it's slowly but surely eating every square foot of our yard. By next summer there probably won't be any grass left. ;-(

I've tried to rip it out by the roots and it just grows back times 100. The roots seem to grow horizontally underground and when the top parts are removed (along with at least some some of its roots) then new sprouts proliferate from the remaining roots I didn't find. It's not like dandelions which sometimes come back in the same spot. It's more like a hydra (the mythical kind, not the plant) where you chop off part and it comes back even stronger.

Our gardener tried weed-n-feed which didn't kill it. Now he's suggesting that I'll need to kill the whole yard with herbicide, wait a few months to make sure the weeds are really dead, and finally re-sod it. Are there any alternatives?

It could be Prunella vulgaris, commonly known as Selfheal - an identifying feature is that there should be a pair of small leaves directly beneath the flower - I cannot tell whether they are present from the photo. If it is selfheal and you have a large patch, a weedkiller containing dicamba and/or mecoprop should be applied, preferably on a warm day, and repeated 6 weeks later. Lawn repair may be necessary once the patch is gone. However, if your lawn is more than sixty percent weed like this, it may be better to take it all up, ensure all roots are cleared and lay new sod. Note that, whilst selfheal is a common lawn weed in the UK, I don't know how common it is where you are - there may be other plants in your area which are similar. This link https://www.onlineturf.co.uk/knowledge-base/guides/weeds/selfheal has an illustration of the flower and, as a UK link, offers alternative weedkillers available here, the latter of which does contain both the weedkillers previously mentioned, with other ingredients, and is suitable for use on lawns, but I don't know if it's available where you are.

I have this plant too trying to take over my lawn (San Francisco bay area). It wasn't there and appeared a couple of weeks a gardener dug up an area around a sprinkler to fix it and I think he threw in some soil from his truck to fill the area he dug up! I think it is "selfheal" based on Internet research.

Not the answer you're looking for? Browse other questions tagged identification grass weeds or ask your own question.