Sprinkler system does not rotate

I have several of these sprinklers in my front garden: 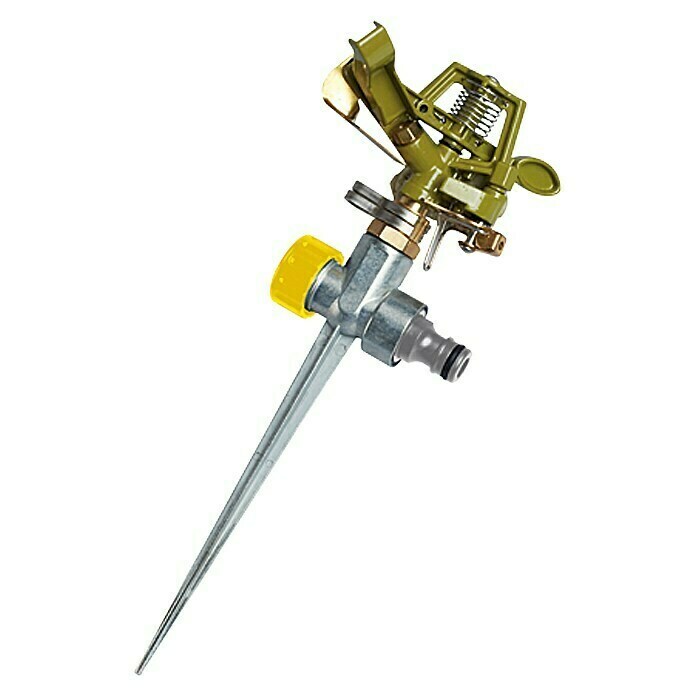 I checked the water lines, but the pressure is still good. They are connected to a 32mm main pipe.

I checked and cleaned the filters, but that did not help. The water that comes out of the sprinklers is still good, but it looks like the arm is not strong enough to move the sprinkler head.

I took the sprinkler apart, as far as this is possible, and put some grease on the moving parts, but that did not change anything.

Is the sprinkler just too cheap? Is there anything else I could try?

I made a small video https://streamable.com/18ntwe

It looks like a reasonably competent sprinkler. First thing would be to watch one of the sprinklers that is working to get an idea of the functioning detail and find which sub-process stops the rotation.

Basically when the water pressure is turned on water flows to the nozzle. If the jet is adjusted correctly the stream flows from the nozzle and hits a flap; this flap is able to rotate in the horizonal plane independently of the head and is knocked away by the force of the water. However the flap is under the tension of a spring and so is forced back into the jet stream where it is knocked out again. The force of the spring returning the flap kicks the whole superstructure to one side so the next full stream reaches a different spot. When the flap is blocking the stream the watering is close to the nozzle, and when knocked aside the stream travels much further.

So the first thing to check is that the nozzle is fully open and not blocked by a speck of dirt. Dirt can get into the water flow if say you drop the hose end into soil when wet. Particles can stick to connectors and end up inside the water hose. The filters are there to try to keep the water flow clear of anything that might block the nozzles. The nozzle has a hex head and should be removable with a spanner/wrench or use a stiff wire such as a straightened paper clip. Check that it is fully clear of obstructions.

Update: It is possible for a nozzle to be blocked for reasons other than dirt accumulated. An example is that the nozzle has not been fully drilled out during manufacture. If the jet is too small then the stream will be too fine to provide enough initial impetus to be stored by the return spring. Check the dimension of the jets in all your sprinklers; this can be done by using a small drill bit set and starting with either the too small or the too big, gently probe the jet until you find the one that just fits. All the nozzle jets should be the same. Another possibility is that the nozzle fits badly into the stem; if the nozzle leaks, with water exiting around the threads rather than out of the jet then the volume of the stream will be diminished.

Next check the tension on the return spring. The flap should whack back with enough force to send the head through a few degrees to get the head to rotate a bit. If the spring is weak (it may not have enough winds on the head) it will clap back but the head will not move. Compare the spring tension on the faulty units to those that are working correctly, and also the rotational friction is comparable between units. Check also that the silver coloured limiters are in the correct location to ensure that the head is free to move through the desired range.

Impulse sprinkler heads need to be checked and maintained. I have a large system with various types of sprinklers and it is necessary to routinely walk around and check operation. Sprinkler systems are rarely a "set and forget" operation. Impulse sprinklers as shown, require a very ridged base ot work properly. The spike base shown provides marginal rigidity depending on soil type. Because of this I generally do not use them.

18
How do I prevent critters from chewing my sprinkler system?
6
How do I figure out where the dead-end is in a sprinkler system?
11
Sprinkler/irrigation system for new yard: DIY or hire a professional?
10
What stops sprinkler heads from retracting?
7
Utility lines blocking off areas of my designed sprinkler system entirely, what to do?
4
What needs to be considered when rerouting irrigation lines?
2
Why are my Sprinkler's no longer rotating?
1
Are rigid poylethylene irrigation pipes more reliable than soft ABS sprinkler hoses for residential sprinkler systems?
2
Sprinkler Troubleshooting