Does Poa annua always flower and produce seed in the spring?

I have been maintaining a relatively new lawn over the last two seasons (it was seeded two years ago). My primary goals right now are to encourage the lawn to fill in better/thicken up, and to keep undesirable plants from becoming established, without use of herbicides.

To that second goal, the obvious, if laborious, strategy is mechanical removal. In my previous home, with a much smaller lawn, I found that after a season or two of catching up on the dandelions, the effort actually wound up being relatively minimal. The new home has a much larger lawn (almost 1/2 acre of grass), but so far that same strategy seems workable. A few hours a week is enough to keep up with the obvious weeds, i.e. anything clearly not grass.

What I'm having trouble with are the plants that are some type of grass, but which I might not necessarily want to thrive in this lawn. And first and foremost of those grasses is Poa annua. I'd like to remove this, but for now let other grasses grow and see how they do. But I'm not sure which is which, even after looking at lots of different "identify this grass" articles and photos (including on this site).

Hence my question: if I'm trying to distinguish the Poa annua from other grasses that might otherwise appear similar, can I rely on the presence of flowers/seeds during the spring season to indicate the Poa annua?

For example, here are some photos of grass that I've tentatively identified as Poa annua, based mainly on the fact that they are flowering now: 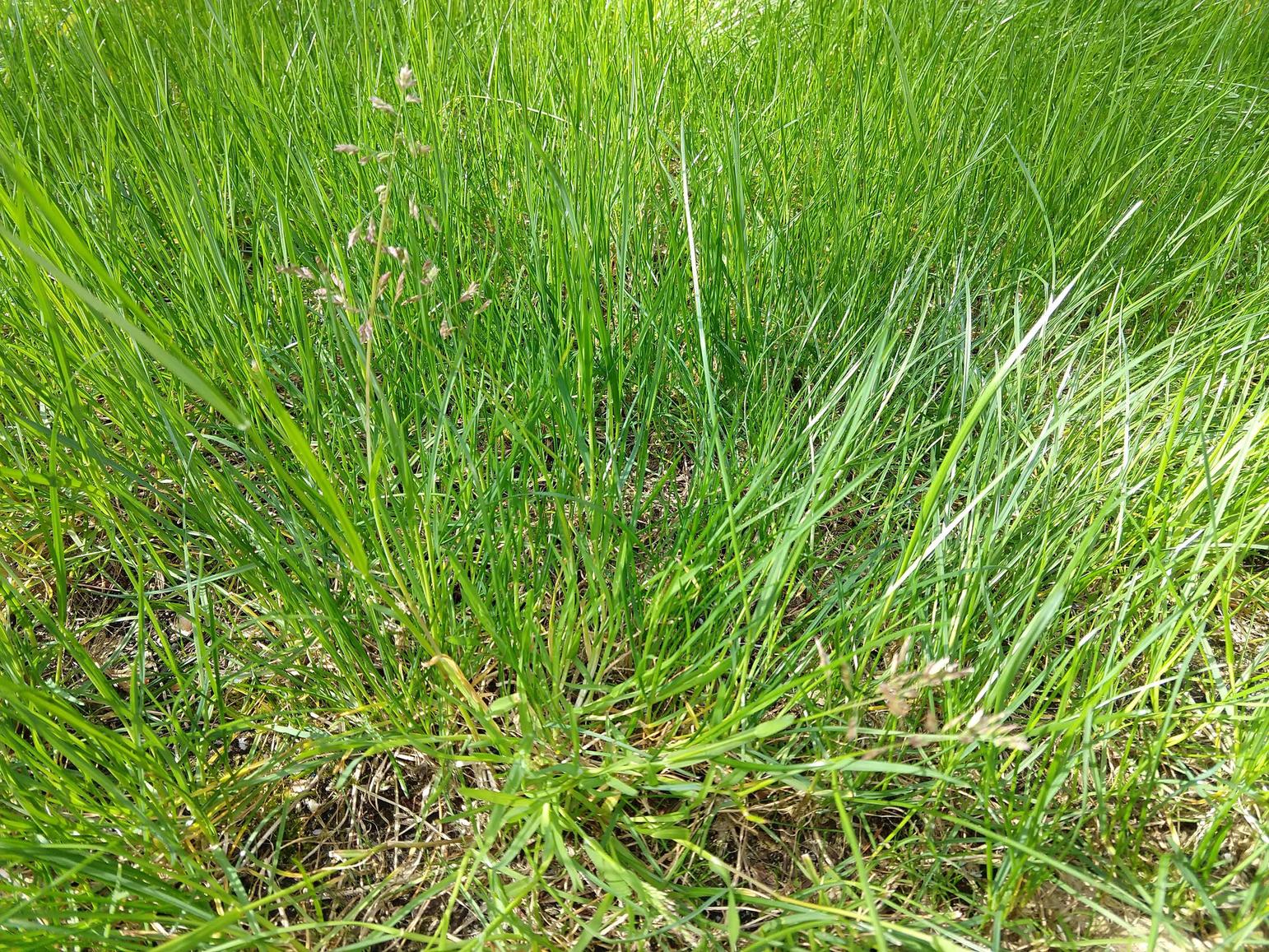 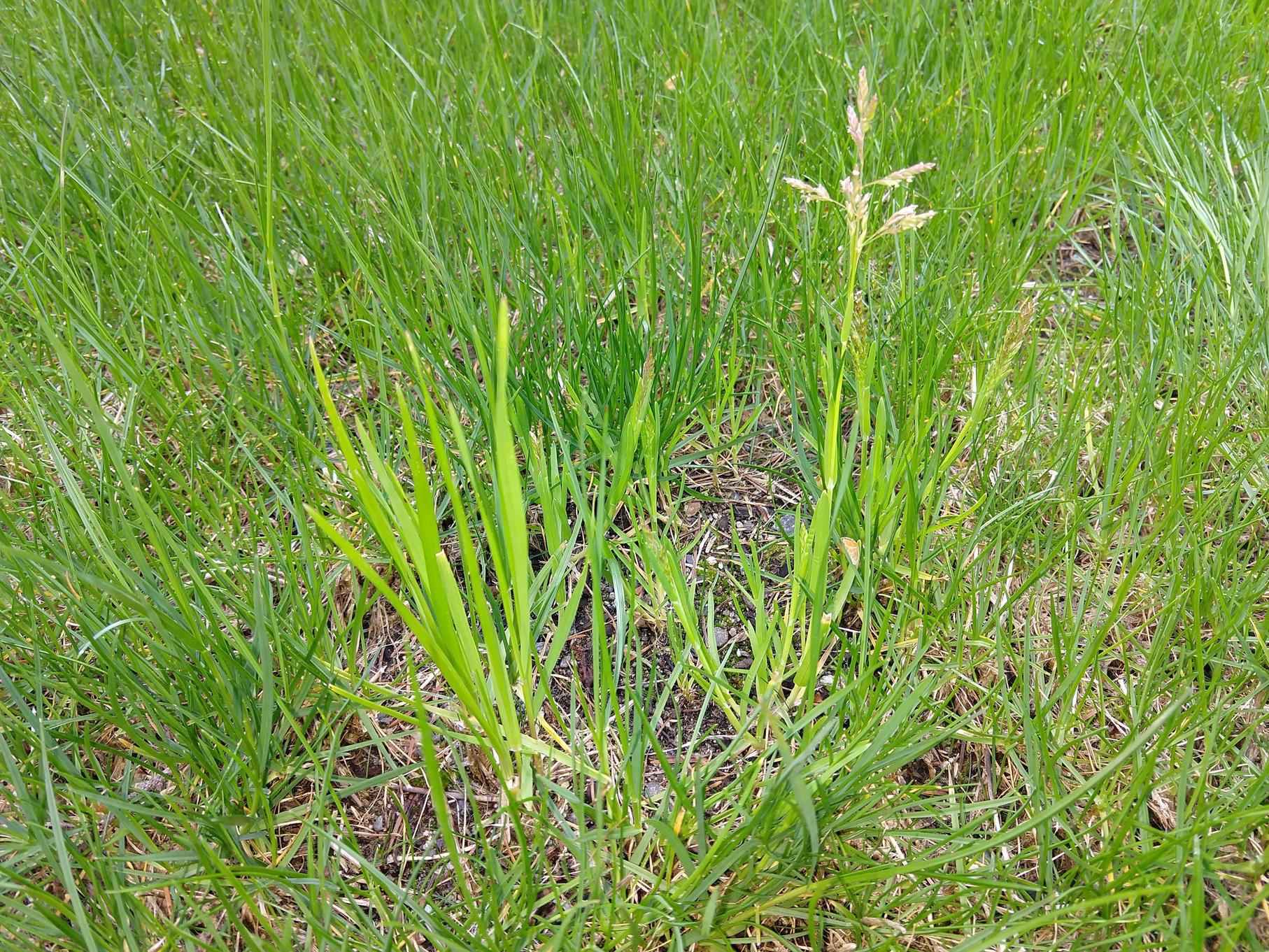 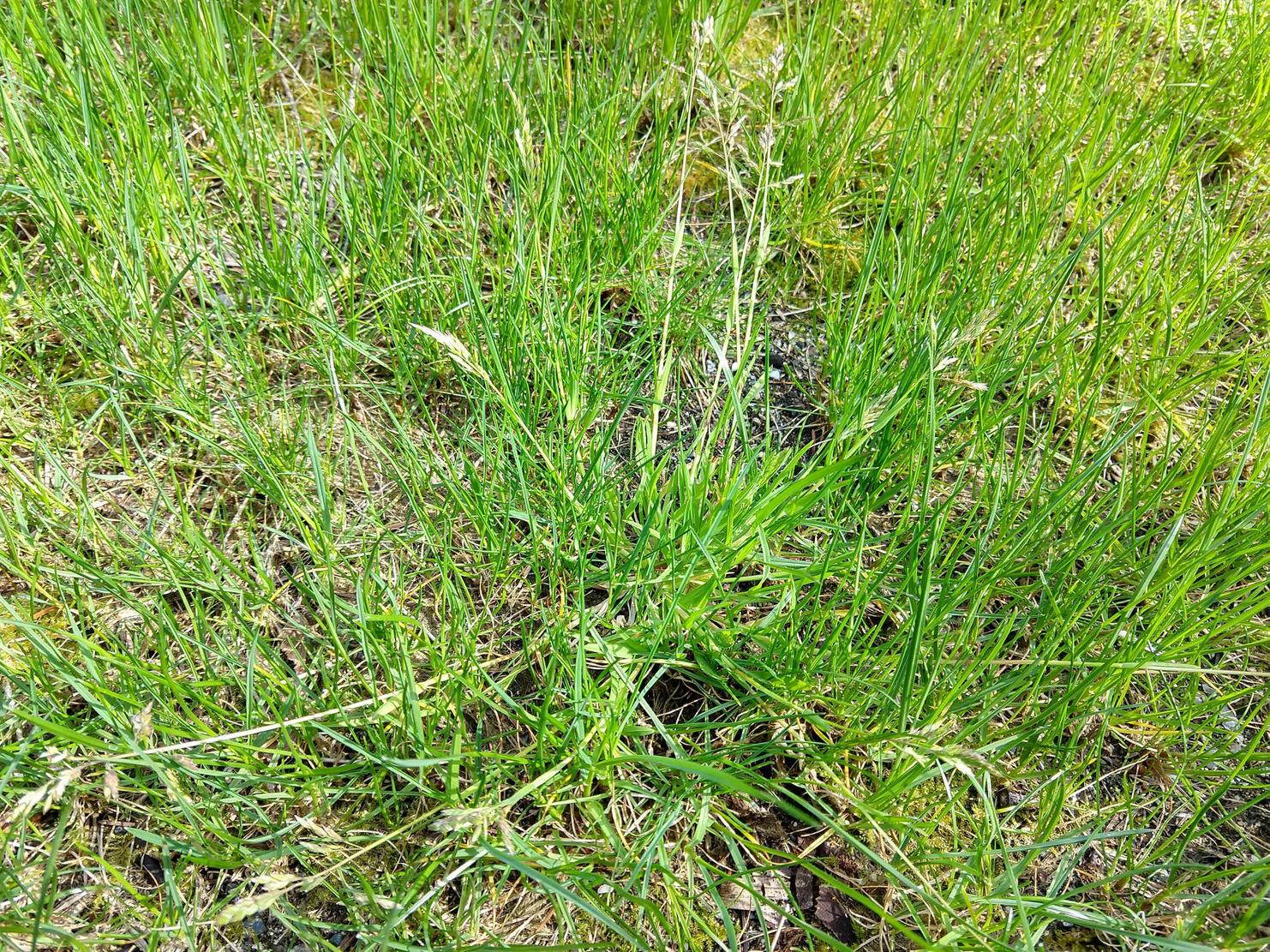 The above aren't growing as vigorously as many of the photos I've seen online, but otherwise they seem very similar. Most important though, they are the only grasses flowering in the lawn right now, and all the grasses flowering look a lot like this. The color is lighter green than the main lawn, the leaves are generally broader and often laying closer to the ground, and there are generally between two up to maybe a dozen stalks with the flowers.

I contrast these to the following, which have similar color and shape but generally which are actually growing more vigorously. Another notable difference is that in many cases, these seem to have a purplish color to the base of the stem, which I haven't noticed on the grass I think is Poa annua. 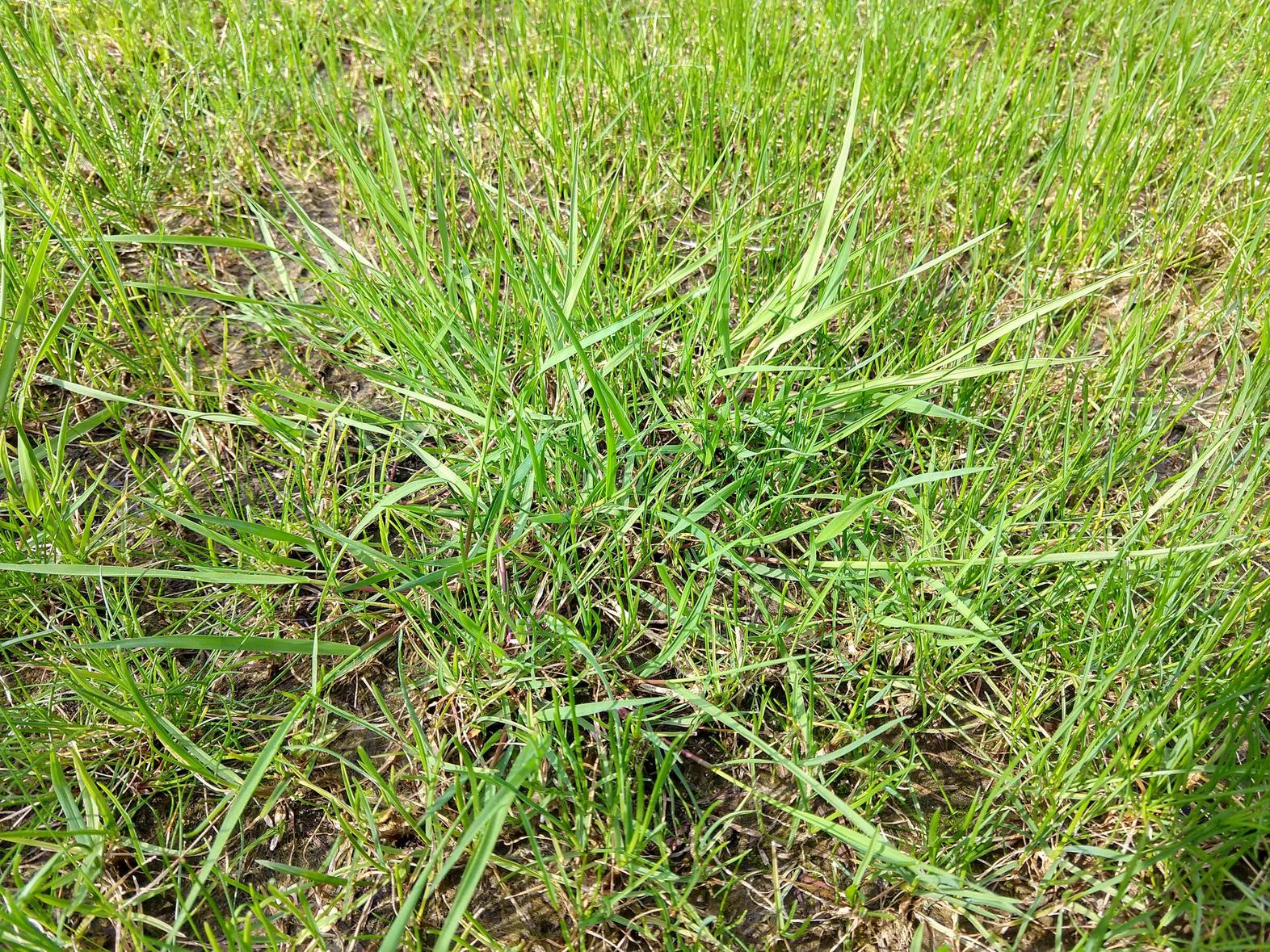 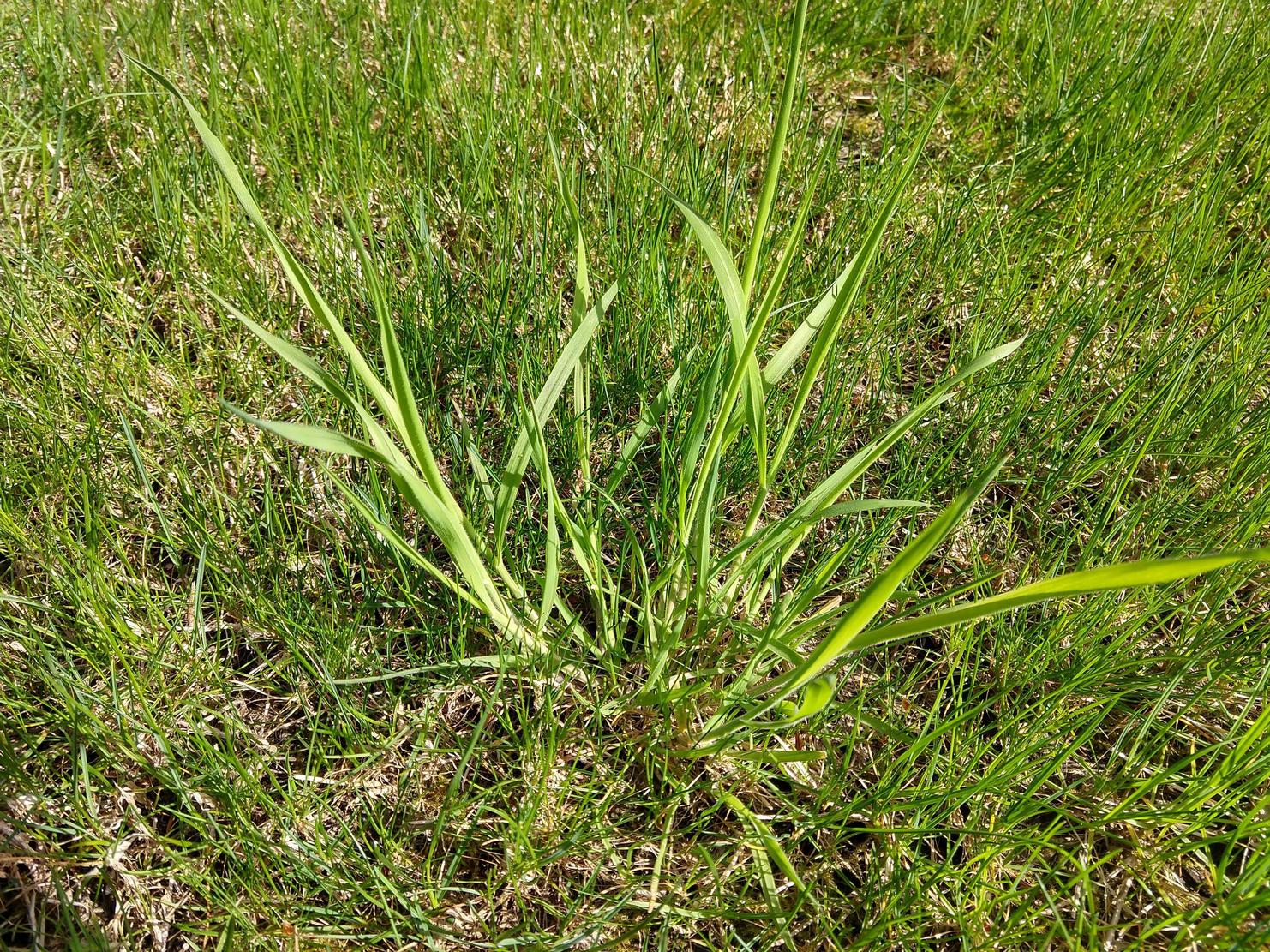 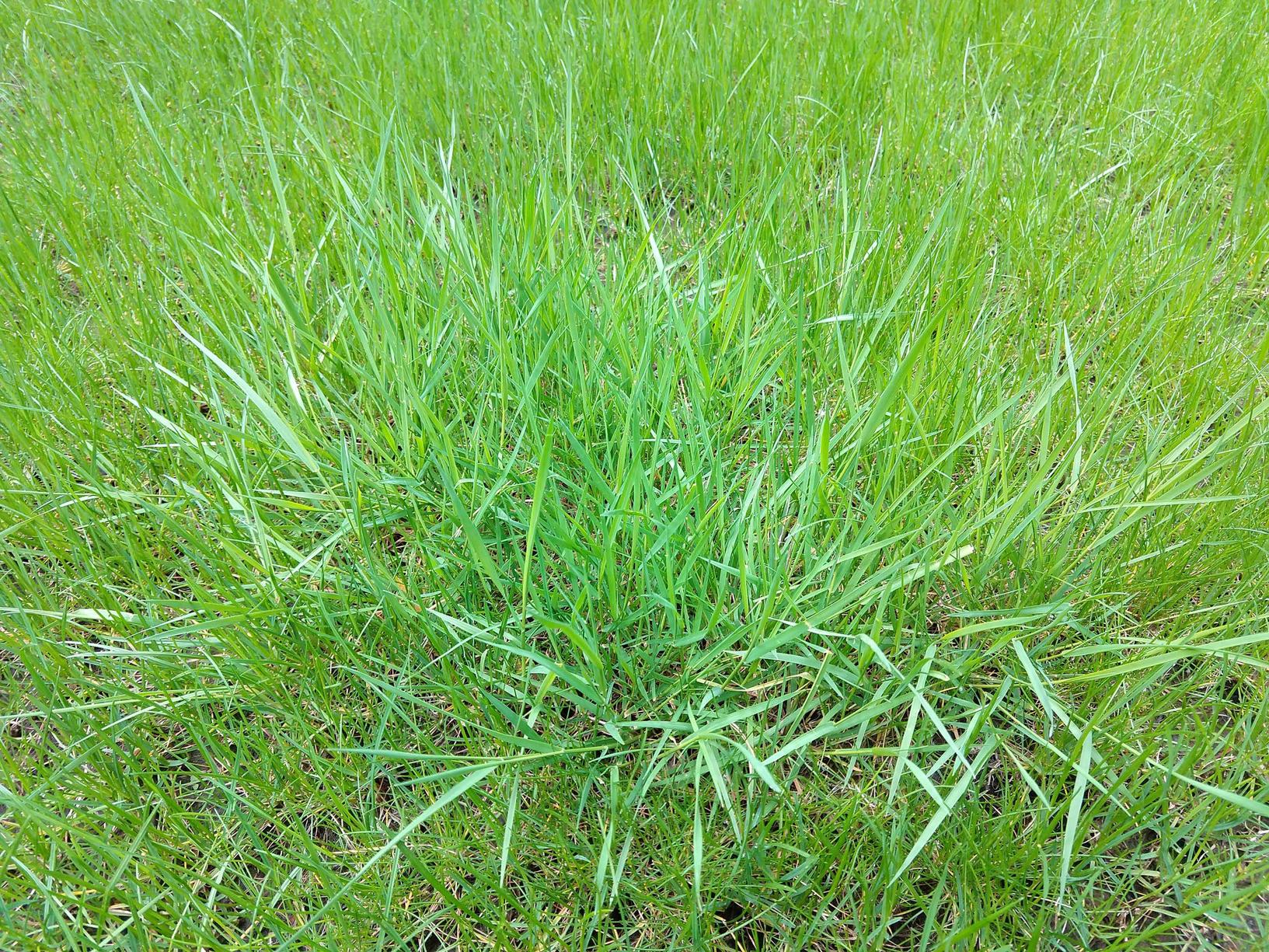 (Sorry for the extra green color on that last one...the phone camera seems to have gotten the white balance wrong on that one, and I couldn't completely fix it on the computer. Suffice to say, the actual colors are much more like those seen in the other photos.)

And for more context, here's the area of greatest intrusion by this "not Poa annua" grass. You can see that there are at least four or five separate clumps all together here: 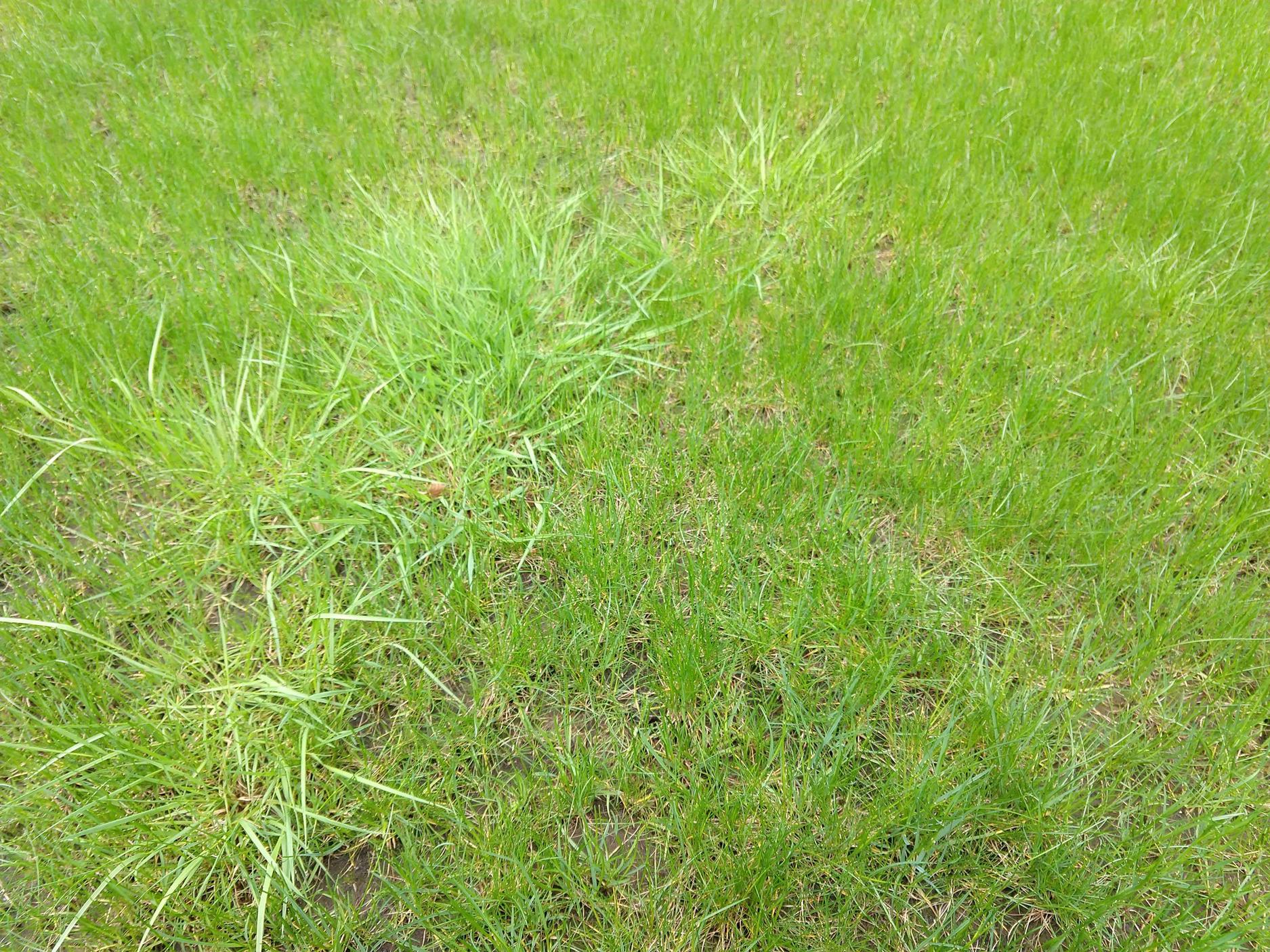 Additional background, if perhaps it would be useful in providing advice:

The first season involved just planting the seed and getting it to grow. The second season (last year) there was very little in the way of apparent undesirables initially, but toward the middle of the season I started to see lighter patches out in the middle of the dark green grass. I made a half-hearted attempt to remove these patches, to see what the outcome would be.

This season, I am seeing regrowth where I'd tried to remove them before, and in some cases it appears that the patch is now covering a much broader area.

After reading dozens of articles online about different grasses, I'm still confused, maybe even more confused than when I'd started, at least when it comes to identifying what I want to keep and what I don't.

One motivation for letting the ryegrass take over where it seems inclined to is that in that part of the lawn where it seems to be doing best (assuming I've correctly identified it, of course) really takes a beating during the winter. It looks okay from ground level, but from an upstairs window you can see all the gaps all over the place, and there are lots of places where the water from the rain just doesn't drain away very quickly. No standing puddles or anything like that, but lots wetter. These areas are where the lighter-green stuff seems to be doing better.

On the other hand, I've read some articles online saying that a seed blend for overseeding (I've overseeded last fall and this spring, though I'm worried I overseeded too early this spring, as I haven't seen much if any germination since putting the seed down a couple of months ago) should contain no more than 20% perennial ryegrass. The blend I'm using is Scott's Pacific Northwest, which given that that's where I live, I would have thought is well-balanced for my climate here in the PNW. But of the non-inert ingredients, it's got over 60% ryegrass (two kinds), and less than 40% fescues (three kinds).

The whole "ryegrass vs tall fescue vs fine fescue" thing seems to be a whole other level of fine-tuning, which is why for now I just want to focus on the Poa annua. But if there's some reason I should tackle other aspects now in spite of the extra complication, I'm open to suggestions.

identification lawn weeds
Share
Improve this question
asked May 6 '21 at 0:48

Browse other questions tagged identification lawn weeds or ask your own question.

6
Preparation for a new lawn to prevent weeds and encourage growth
1
Why is it so hard to find pure perennial ryegrass turf seed in Australia?
5
How to thicken grass
2
Should I be concerned about this weedy grass popping up in my lawn?
3
What is this grassy weed?
7
Dark and light core plugs after aeration
3
Could you please identify this weed in my lawn?
3
If I just leave dandelions and clover in my lawn, what problems may happen?
0
Why does part of my spider plant appear variegated and the other part does not?
2
What happens if perenial ryegrass is mowed high