Waterproofing a section of a soaker hose

I use soaker hoses to irrigate the garden in my backyard. But this garden is divided into two separated beds, with a few meters of distance between the two covered with pavement. 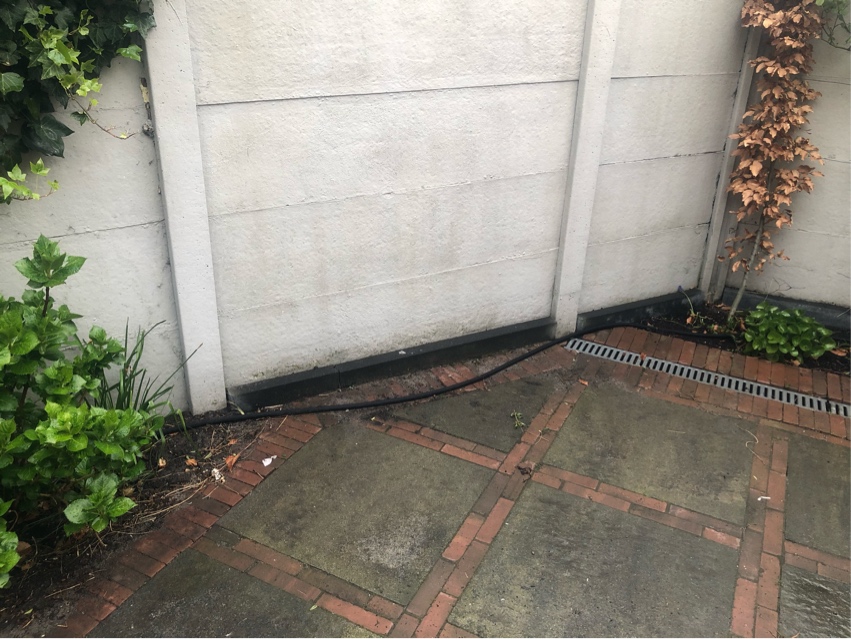 Since I only have a water connection beside one of the beds, I have to extend the soaker hose from one bed to the other over the pavement (see picture). As a result the pavement always gets wet when watering the beds, what leads to water waste, but also excessive weeds and fungi growth.

I don’t find any connection offered by the producer of the soaker hose (Gardena), to tackle this particular situation where one needs to install separate soaker hoses in discontinuous series. So I figured the best way to solve the issue would simply be to waterproof the length of soaker hose between the two beds, and keep the whole setup as is, without recourse to any additional patches or connections.

I wonder what is the best way to waterproof just that part of the hose by filling the weeping pores, without damaging the hose itself. Would a shoe waterproofing spray work? Or would it be too aggressive on the material (rubber, I assume)? I’d rather use something invisible that I can apply on the surface of the hose rather than a tape that gathers dirt and dust around the seems.

The Gardena system is pretty much compatible with their other hoses and connectors. They come in two diameters and are easy to install. I would simply cut the soaker hose at one end of the pavement and click in a piece of a solid hose in between, using the standard hose connector sets, either as a permanent setup with the (cheaper) hose repair module or (my preference) using the flexible couplers.

Not the answer you're looking for? Browse other questions tagged watering irrigation hoses or ask your own question.

16
How do I repair a soaker hose?
5
Soaker hose - repair or replace
3
What hole spacing for a pvc watering system?
2
Hose Reel Problems
5
How does a self-cleaning dripping hose work?
7
How do I free a stuck ball bearing on a garden hose quick connecter?
2
Soaker hose with a rain barrel
0
Sleeve for hose tunnel
1
How far can water travel through garden hose and soaker hose?