Can you cross-pollinate between different families of plants?

I know you can cross-pollinate between species, such as the tangelo tree, but could you do it between different families, such as a cactus and an avocado (that is just an example)? What would I need to do to mix two different plant families to create a new species between families?

As to plants generally--I've never heard of a cross between plants of the same order but different families, but it's possible at least one might exist.

Crosses between plants of different genera of the same family are fairly common by comparison, but they're still rare: e.g. goji and tomato. They might not be as fertile as the parent species, if they're fertile.

Crosses between different species in the same genus are fairly common, but (as with crosses in different genera of the same family) only some species combinations work. They might not be as fertile as the parents' species, if they're fertile.

Crosses between different breeds of the same species should pretty much always be able to happen, and they should be fertile (except in very rare cases, such as when you cross a diploid watermelon with a tetraploid watermelon--that results in a triploid, and triploids grow seedless fruit).

You need to ensure that the number of chromosomes is compatible. Beyond that, I'm not sure what to recommend beyond trial and error, or checking to see how much of their genome is the same.

Doubling chromosomes with a chemical can sometimes make a kind of plant compatible with another (but the chemical may be extremely dangerous to humans in some cases).

A cactus and an avocado aren't even in the same order (which is a higher rank than family). They're both Angiosperms, though. I wouldn't count on being able to cross them, even if you have a team of heavily funded scientists behind your back, and twenty years to do it. It's like crossing a chicken with a dog.

Interesting question. A quick google search for "plants", "hybridization" "different families" turned up this ancient reference (see image below) from the 1887 Yearbook of the United States Department of Agriculture. Three families are listed: Amaryllis, Gloxinia and Figwort.

You could try searching for "interfamilial hybrids" and see what turns up. 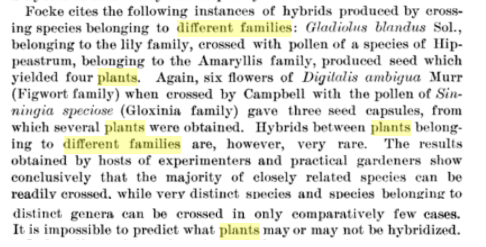 Not the answer you're looking for? Browse other questions tagged carnivorous-plants or ask your own question.