What's wrong with my chili bush?

I've had a chili bush I grew from seed for about a year now, and it's finally growing into something resembling an actual bush (rather than just a seedling) and it was going great until the last few weeks.

The new leaves are starting to kind of crinkle, and the most recent new shoots look as though they're dying entirely.

In spite of this it's bravely trying to grow a pepper on it!

But yeah - couldn't see any pests (other than the stupid things that ate the leaves further down the plant a month or so ago which are no longer affecting it) so am I looking at bacteria, fungus, virus, or deficiency here? Or something else?!

Location: Brisbane, Australia. It's late Summer here. Soil is clay, although clay breaker has been used occasionally on it, and the grass nearby has been fertilised recently.

Here's some pics in case it helps: 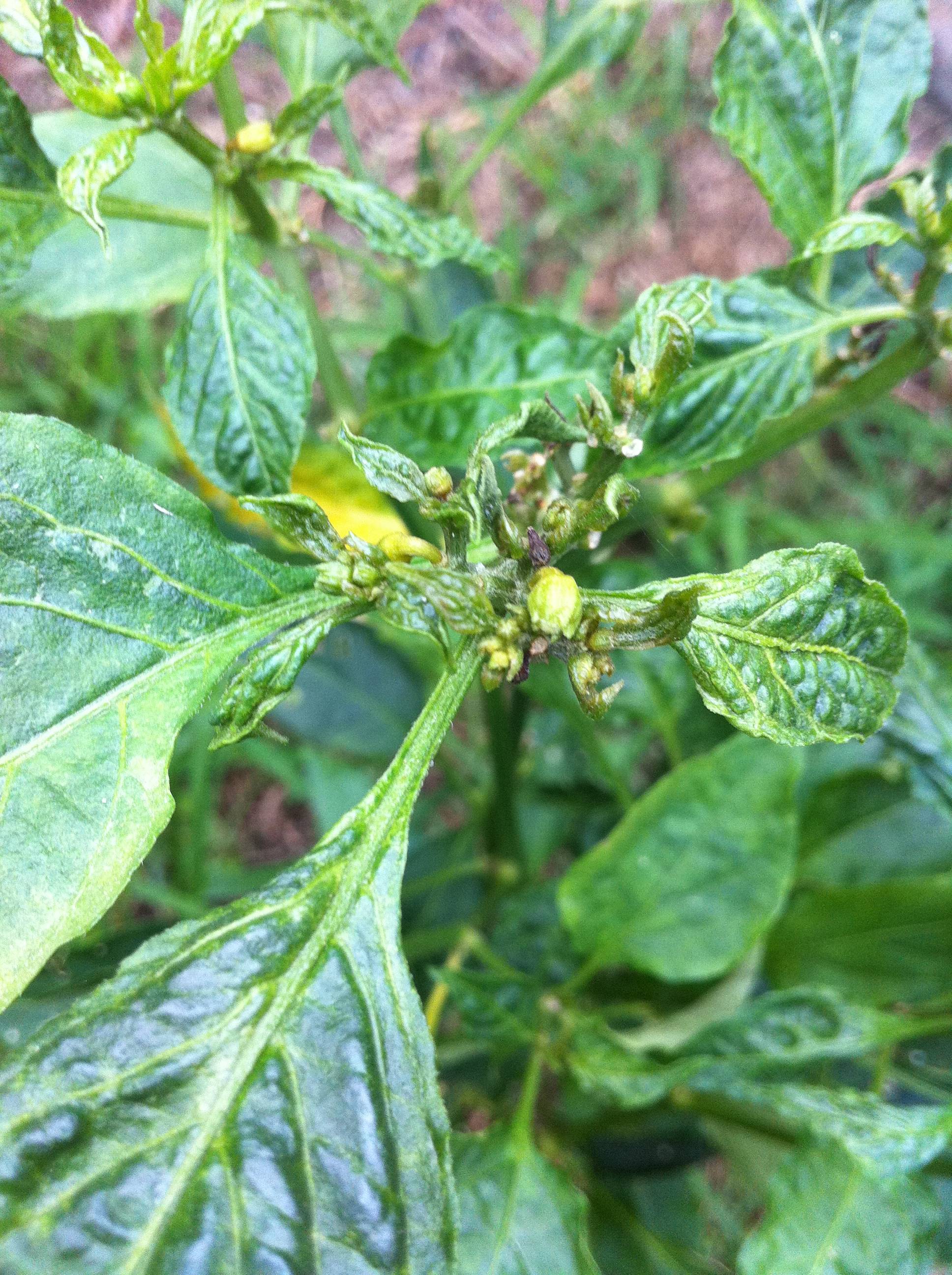 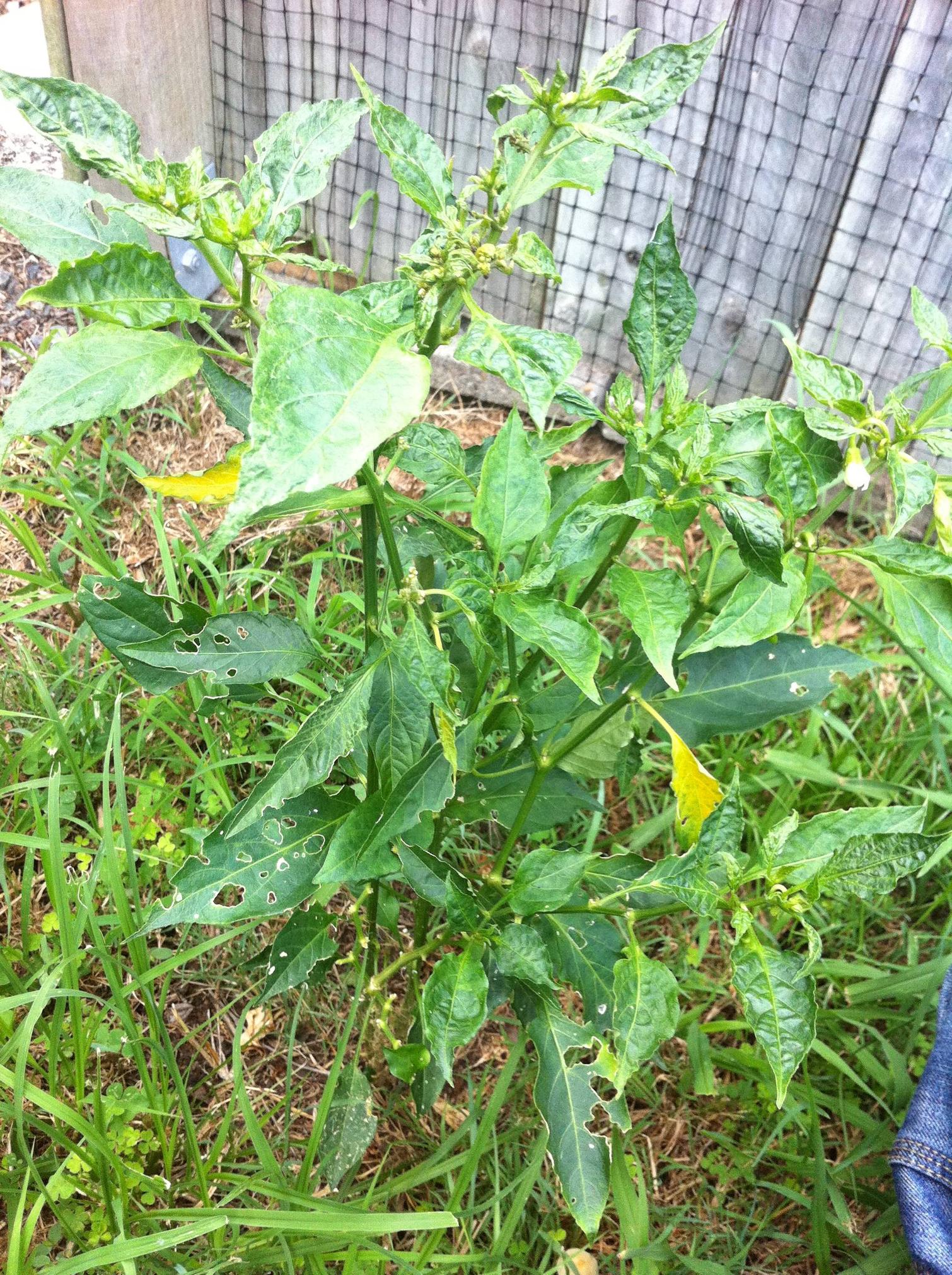 EDIT: Accepting diagnosis answers is tougher than I envisaged!

So, since originally posting this, I refertilized (herb/veggie fertilizer) which seemed to only very slightly help. Then, we had a cyclone, which dumped 150+mm of rain onto the soil, which also helped a bit, then I cleared the grass in a 50cm diameter circle away from the base, added weed control sheeting, topped with a little new soil, and fertilized with some stuff that had higher calcium concentrations in it than most fertilizer. Result is: 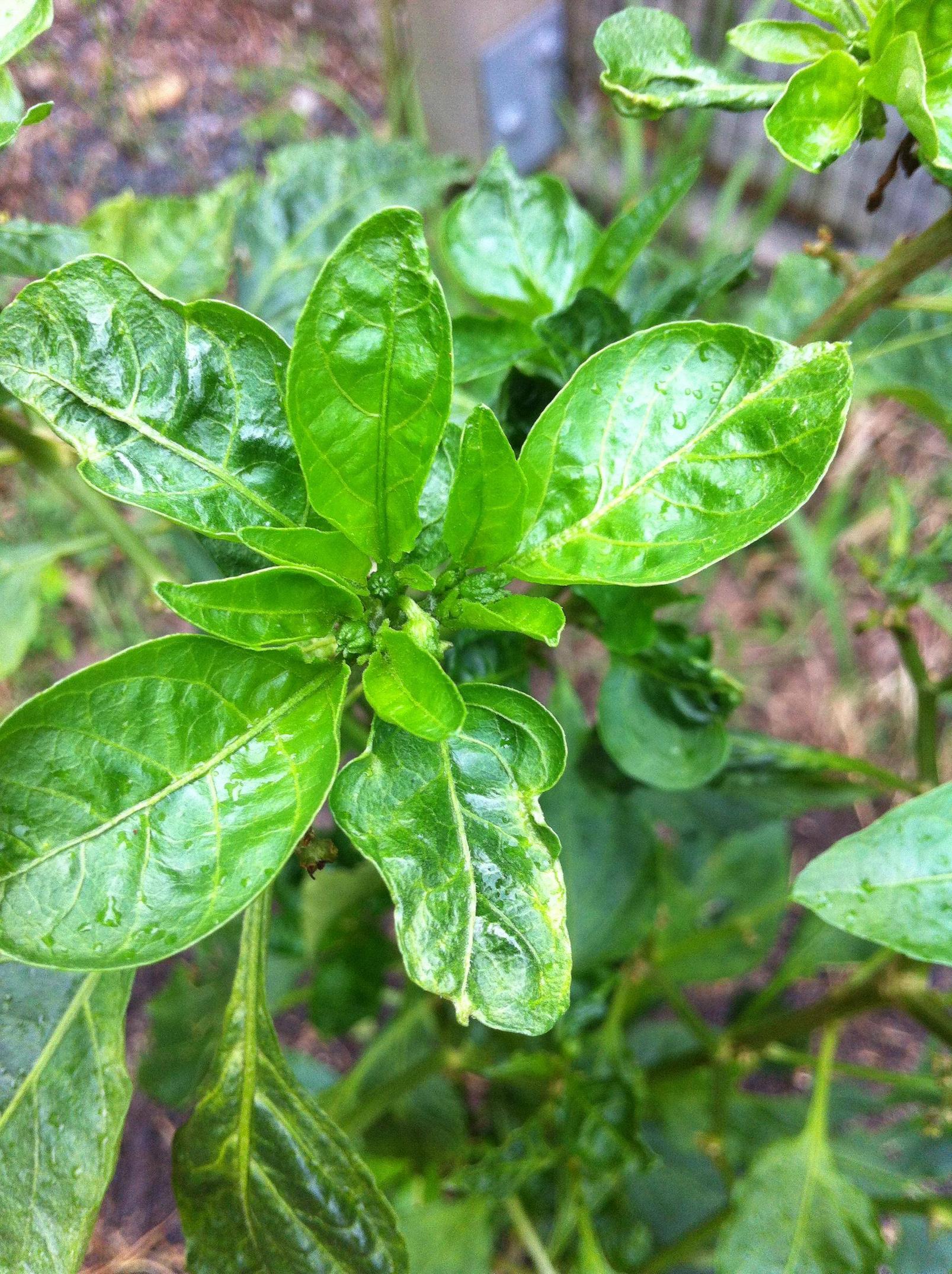 Doesn't look completely better, but seems a lot less unhappy. So it's really hard to tell which of the three things it was that made the most difference, and I won't really know unless the plant starts to get worse again. As it is, it seems like the new shoots are much less curled (but not completely flat) so... yeah. Here's a pic of the whole bush showing the base etc: 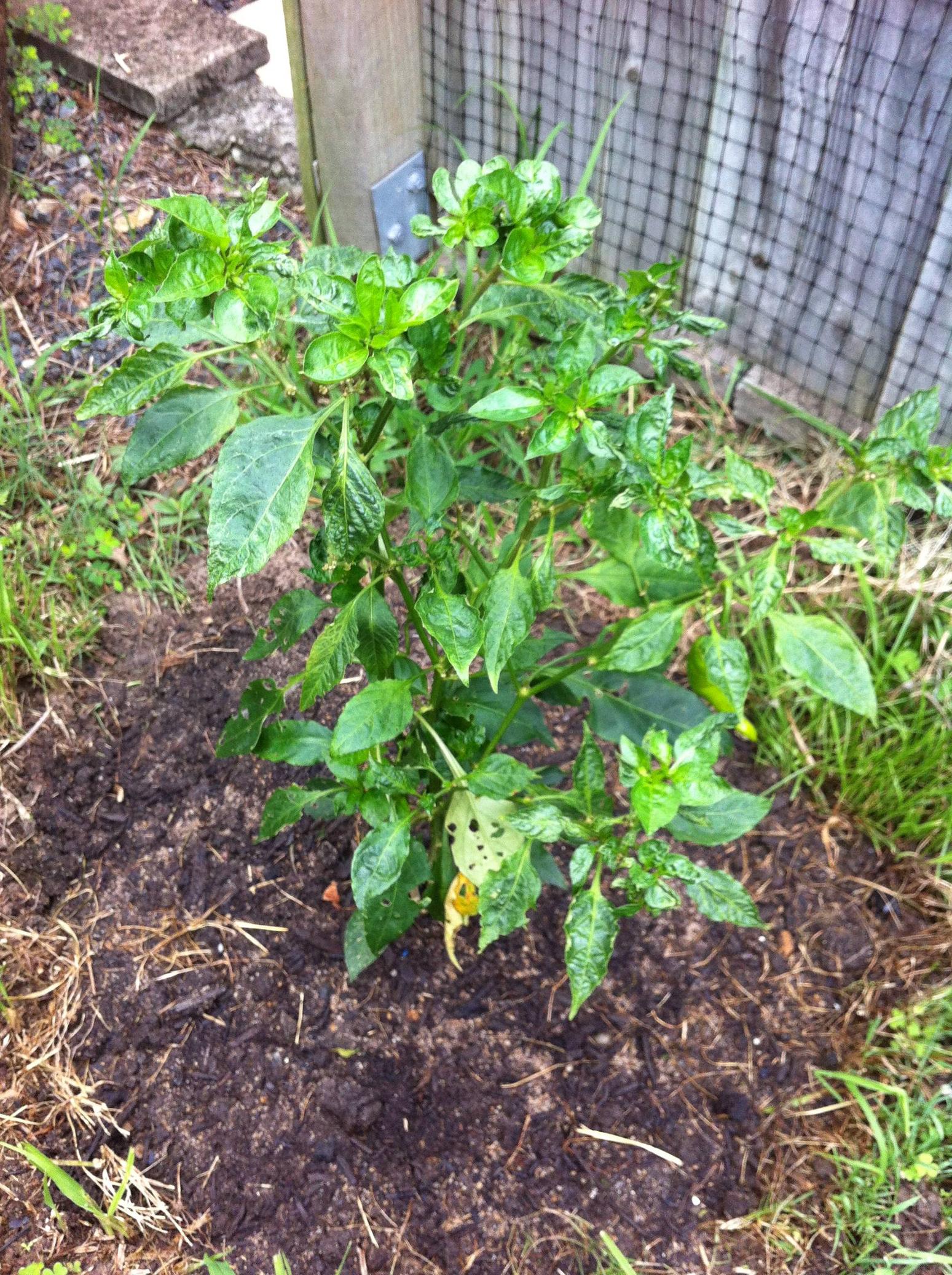 EDIT: Latest pics after drenching in eco oil and pyrethrum a week or so ago.

As of last week, this is what the worst affected parts of the plant were starting to look like: 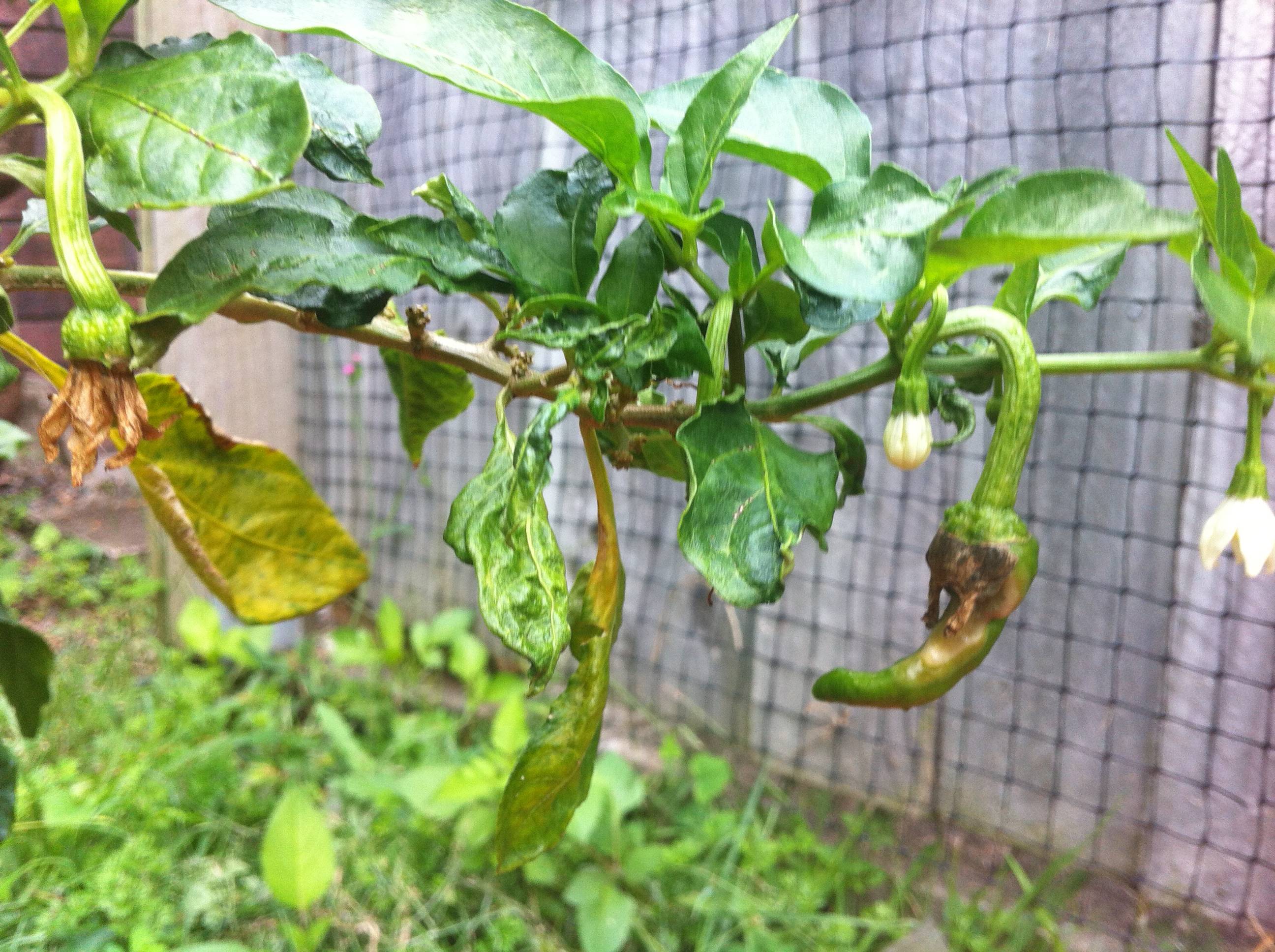 I finally tried absolutely drenching the plant in eco oil and pyrethrum (both sides of all the leaves, all trunk/stem surfaces... to the point it was dripping liberally off onto the ground underneath it.) A week or so later, it started to look like it was throwing out new leaves and these weren't affected, so I trimmed off the older damaged foliage etc, and this is now the result: 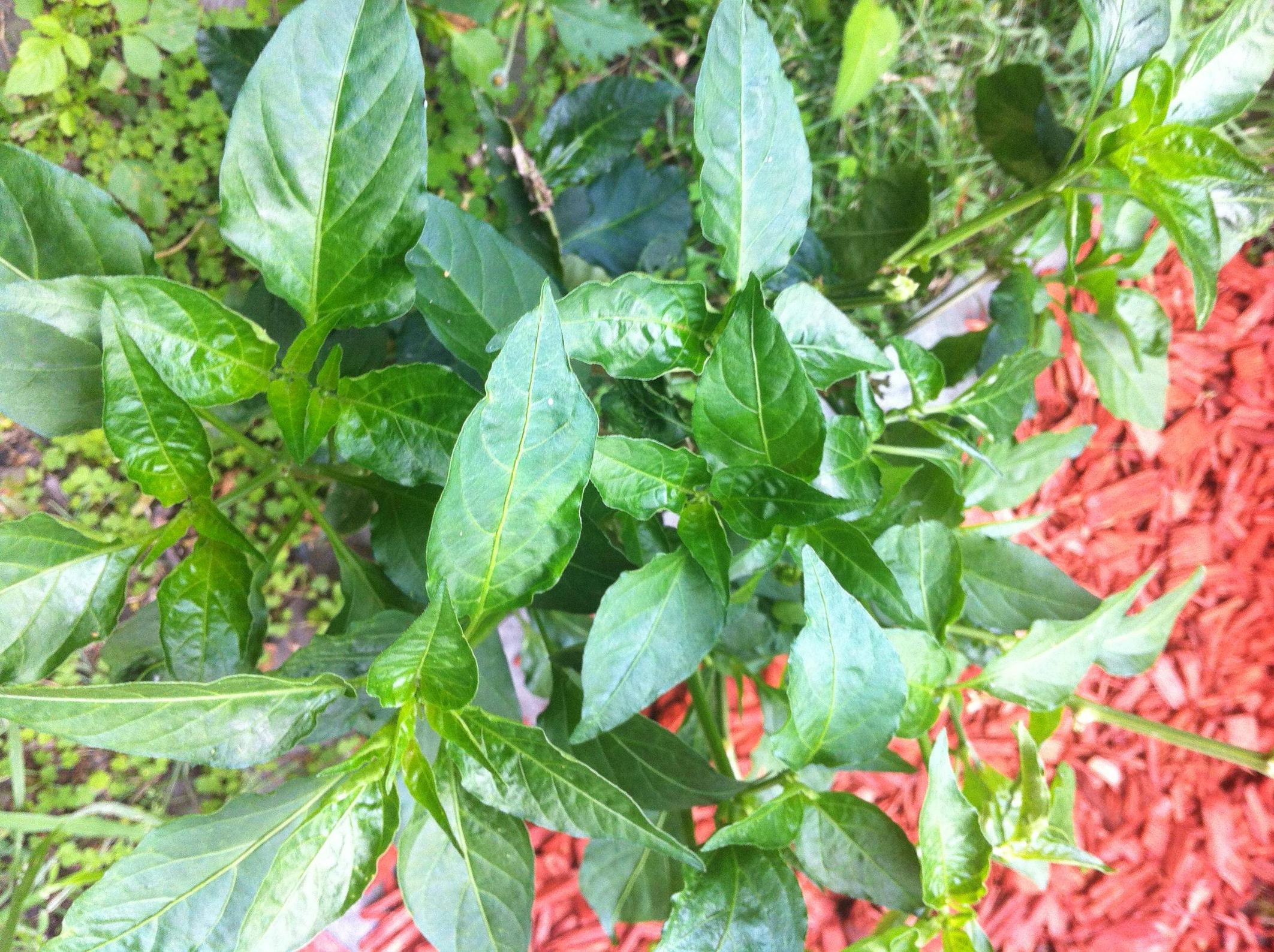 It... certainly is very suggestive that it might have been a pest that was not easily seen... will wait to make sure it's still on the right track, but all things going well I'd say this will finally get a resolution in a few weeks or so... capsid guy is looking good so far :)

EDIT: update after a year of trying to nail this persistent sucker.

So my latest update to this is that none of the above appears to have made a lasting difference. After a lot of reading up and experimenting over the year I'm almost certain now that this is a virus, and I suspect it is spread by midges or similar. Spraying with white oil and pyrethrum not just on the chili bush but also on surrounding grass, plants, vegetation, and weed reservoirs appears to dramatically slow the spread of the disease from reaching new plants, but you need to keep applying the spray every two to four weeks or it wears off and the bugs come back, and then a few weeks later so does the curl.

If you give it fertilizer and make it generally happy with water and light and warmth etc it seems to be able to outgrow small infections reasonably well, but once it starts to get too infected you have to basically kill it and burn the bush to prevent spreads. The bush in the images above is now sadly cut off to the ground and burnt, though the stump has started to sprout some leaves so we'll see if the below-ground portion is okay or not.

The Bhut Jolokia and Butch T chili plants I also grow are also possibly to be affected by the virus, but not as strongly.

Capsid bug damage looks like this - as the distorted leaves grow, they should look tatty and have holes. Whether its thrips or capsid, it's difficult to see the bugs themselves, you usually only know there's a problem with them because of the distorted and puckered appearance of the affected plant.

Some sort of pesticide spray seems to be necessary - check what's available in your area which is suitable for food plants. This usually means a non systemic treatment, and it will need to be applied frequently, but check the instructions.

If it's growing that slowly, there's no evidence of bugs or other infestations or infections, take a look at potential nutrient deficiencies in your soil.

Any nutrient deficiencies could be due to an actual lack of the nutrient, or from a lack of the conditions required for the plant to access the nutrient (if the pH is too low, for example). My acidic clay soil in Adelaide tends to grow plants that are chronically low in calcium, so I remedy that (long-term, year by year) by applying agricultural lime (calcium carbonate) to raise the pH and gypsum (as well as manure and compost) to help break up the clay and make it less difficult to dig next year.

My calcium-deficient plants do look somewhat like your chili bush there, and it will need extra calcium at fruiting time, so... Test the pH. Then if your pH is fine, send a sample of the soil off to be tested. Fixing either pH or nutrient deficiencies is a long-term project, but if that's your problem, there are things you can do in the short term to assist this plant.

Also, the grass you've got growing around the base of the plant will hog whatever nutrients it can. If you can, try to pull some of it out and mulch (leaving a small clear area around the actual plant stems in case of excessive damp) with something suitable for your current weather.

Not the answer you're looking for? Browse other questions tagged diagnosis chili or ask your own question.

12
What kind of chili turns brown and shrivels when ripening on the plant?
5
How to handle this chili plant?
5
What's wrong with my tomato plant?
4
Diagnosis: capsicum plants with holes in leaves, brown spots - no bugs visible
5
What's wrong with my ornamental grape vine?
4
Why are my chili flowers small?
1
Chili flowers wilting few days after opening
1
Can you help me prune my chilis?