What are the best tools for testing soil?

I have a large pile of ashes from burning leaves, wood, limbs, pine straw etc, and I've read that ash can be helpful to plants if my soil pH is not over 7.5.

How would you recommend that I test my soil, and what tools should I use?

I'm looking to test my soil soon and want to buy the necessary tools/equipment.

For a relatively small fee, I think it's easier and gives better results to send it to a lab for testing. If you're in the US, your state university's cooperative extension can give you pH and basic nutrient content for $10-20.

Did you try your Local Extension Office? Ours offers free soil testing. I believe most offer this service, but you may want to call and check. Some apparently have stopped offering soil testing (budgetary issues).

I was in a hardware store last week and saw a PH testing kit. I was around $10.

Or if this is the sort of thing you want to do regularly consider getting a Ph test probe. 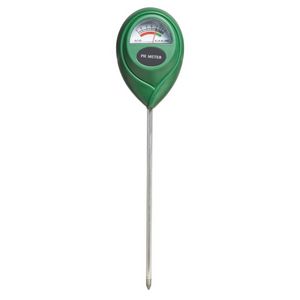 Just stick it in your ash (or soil or compost) and it will give you a (moderately) accurate reading. No batteries required.

A quick and dirty way is take the ashes and mix into a sample of your garden soil in the proportion you intend to use. Then sow some lettuce seed. Lettuce is sensitive to contaminants and will not germinate well when exposed to them.

I use liquid regent aquarium test kits to track my sail parameters. I keep an aquarium so they may not be worth the price if your just using for soil (still only a few dollars).

First you establish a base line by testing the water you plan to use. then you mix a little bit of your soil in to water in a bucket, let the dust settle a bit and test the water from your bucket.

Then by comparing the readings of how the soil affects the water you can deduce the affected parameters with reasonable accuracy.

Sounds as if you want to check the current ph of the soil itself, before amendment with your ashes. Either way, a ph test probe is probably easiest, but I've found it's important to take more than one sample for testing. Any areas which may have had something dropped on them, or added to them, (bird poo, old potting compost, an area with a bit of peat or manure in the soil already) will possibly give a different ph reading than an area even just 2 inches to the left or right, so I generally took several samples from different areas to get an idea.

I should add that the one I used (Rapitest ph meter) was supplied with several boilable test tubes to which soil samples were added for testing.

Not the answer you're looking for? Browse other questions tagged soil soil-test or ask your own question.

7
How do I determine what the soil conditions are where I live?

9
Is it possible to do my own extensive soil/organic matter testing?
4
Portable soil and compost testing kit
6
Is testing the pH of soil with cabbage juice accurate?
7
How do I determine what the soil conditions are where I live?
1
Does soil need to be acidic for carnivorous plaints (droserae)
5
What’s the ideal slope for draining a garden with clay soil?
1
Testing for nitrogen after applying blood meal?
4
For a newly built apartment, when and how do I start developing what's basically a building site into a healthy soil for a variety of plants?