What's this in flamboyan plant trunk?

I planted a flamboyan seed (ie. Royal Poinciana) in a pot a few months ago, and it was growing really nice and had nice foliage (if that's the correct name?) .

Recently, I've noticed that the leaves all turned brown and dry, and then fell off. I know the plant's not dead, but I'm not sure what's wrong. The plant doesn't have any leaves now.

Btw, I live in the Caribbean and the plant receives full sun. Although the sun here's very strong, I had the plant during the summer (which was much hotter and dryer) and it was looking nice. So I don't think it's the heat. 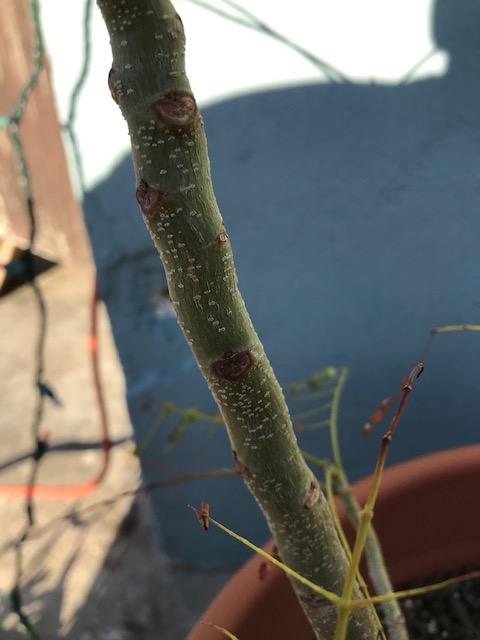 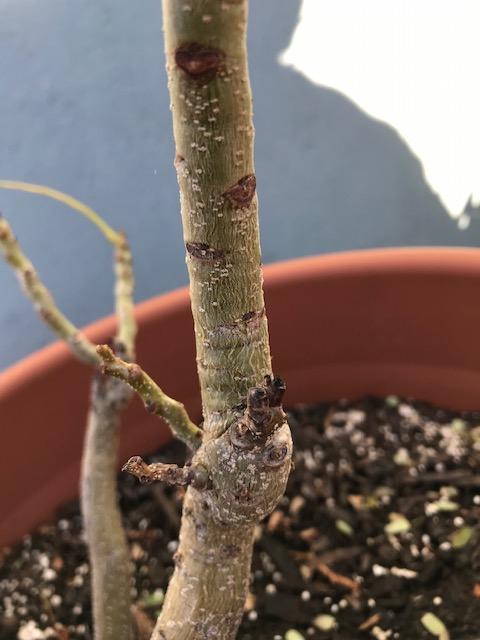 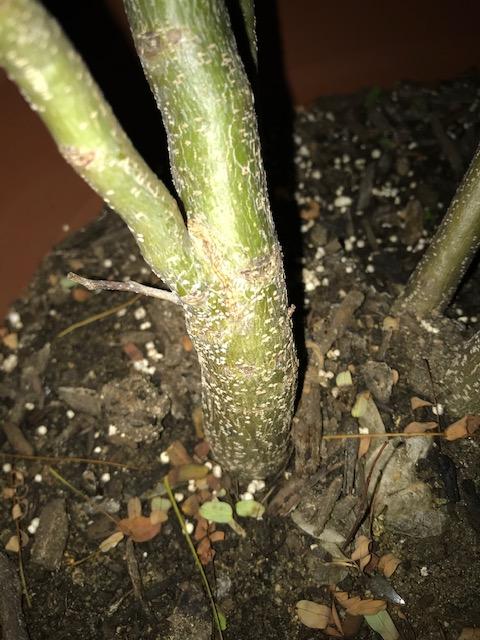 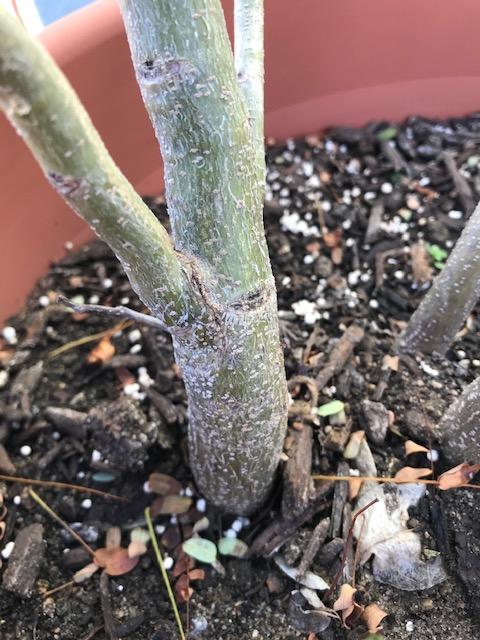 The brown/tan spots on the bark are not a disease symptom. The spots are called "lenticels." They are a natural part of the bark of young branches and shoots of Royal Poinciana. As branches age, the main color of the bark will change from green to gray, at which point the lenticels become much less noticeable because they match the background color of the bark.

The trunk of this tree is covered in a relatively smooth pale brown or greyish-coloured bark, and the bases of older trees are usually somewhat butressed in nature. Younger branches are usually hairless, greenish in colour, and covered with numerous pale brown raised spots (i.e. lenticels). (Source)

Now, let's talk about what actually is wrong with your plant. Royal Poincianas do indeed like full sun, and are relatively safe from pests and other problems. The main problem seems to be overwatering. Here are watering instructions from the Spruce:

Water the tree on a regular basis during the spring, summer and early fall. Keep the soil moist, but never soggy, until the roots become established. During the late fall months, gradually cut down on the water supply before stopping extra watering during the winter months when the tree goes dormant.

So, you should have cut back on watering during the fall, then stopped altogether now that its winter. It's hard to tell if you hurt your tree by overwatering it, because this is its normal dormancy period, so dropping all its leaves is expected. I would stop watering now and let it dry out. Start watering again in the spring, and hopefully your tree will come back in the spring. Keep an eye on the soil moisture, and try to water your tree as much as it needs, but no more.

If you're fertilizing, you may want to dial it back. I see what could possibly be some salt buildup on the base of the stem in the last photo. Some guides encourage heavy fertilizing while others recommend fertilizing sparingly, but most guides are for a tree grown in the ground, which will need the nutrients as it grows aggressively. As a potted plant, it should grow more slowly. I suspect you'll be better using a slow-release fertilizer once or twice a year, and erring on the side of "sparingly."

If your tree doesn't come back in the spring, and you decide to replace it, put the new tree in a clean pot with fresh soil. That's a good idea just in general, but in this case there's a specific reason. Root rot in Royal Poinciana is caused by wet roots and a fungus called Phellinus noxious. Proper watering will help protect your new tree from root rot, but it's still better not to start it in soil infused with that fungus. You can reuse the same pot, just wash it first - soap and water will do the trick.

Not the answer you're looking for? Browse other questions tagged trees diagnosis plant-health plant-care or ask your own question.

3
What's Wrong with this Orchid?
4
What is wrong with my trees? The bark on one side is cracking, splitting, and peeling off
4
Plumeria Leaf discoloration and falling off
3
Can I save my Dwarf Umbrella (Schefflera) Tree?! It's suddenly dying (possibly my cat?!)
2
Can lemon plant survive?
0
Adding shade to a potted plant?
3
Please identify my plant
2
Aglaonema Firecracker leaf turning yellow with brown spot. Sunburn or overwatering?
0
What’s wrong with basil plant?