Why is my otherwise healthy indoor meyer lemon dropping so many leaves?

I have a meyer lemon tree indoors that appears very healthy except that it is losing all its leaves. As such, I'm worried that it's actually dying. I've checked the other answers on Gardening SE about indoor lemon trees (there's a lot) and none of them show the same symptoms.

I received this lemon tree last spring as a gift; it came in a pot and was probably a year old, I'd guess (around 0.5m tall). It had no blossoms or fruit. I repotted into a bigger pot using a raised bed soil mix (for good drainage) and kept it outside through October. It was quite happy, tripled in size, bloomed, and started about a dozen fruit.

Starting in November, though, it got below freezing some nights here in the Pacific Northwest (Zone 9a), so I brought it indoors. I put it by a window, but since none of the windows in my house get direct sun, I also added a pair of LED grow lights (one red/blue, one full-spectrum) on a 10-hour on/14 hour off cycle.

A couple weeks after bringing it indoors, it dropped off most of the incomplete fruit ... all but the two largest ones. Then it bloomed again, more than it had outdoors. And then it started dropping leaves. Since then, it's been dropping leaves daily, and is down about 1/3 of its total leaves, which has be quite worried that it's dying on me. The strange thing is, unlike this question or this question, the leaves are glowingly healthy until the moment they drop off ... dark green, shiny, with no brown or yellow spots at all, as are all of the tree's leaves. It just seems to be dropping them for no reason. The two lemons on the tree continue to get bigger very slowly; it's been 3 months and they're not even turning yellow yet. Photos: 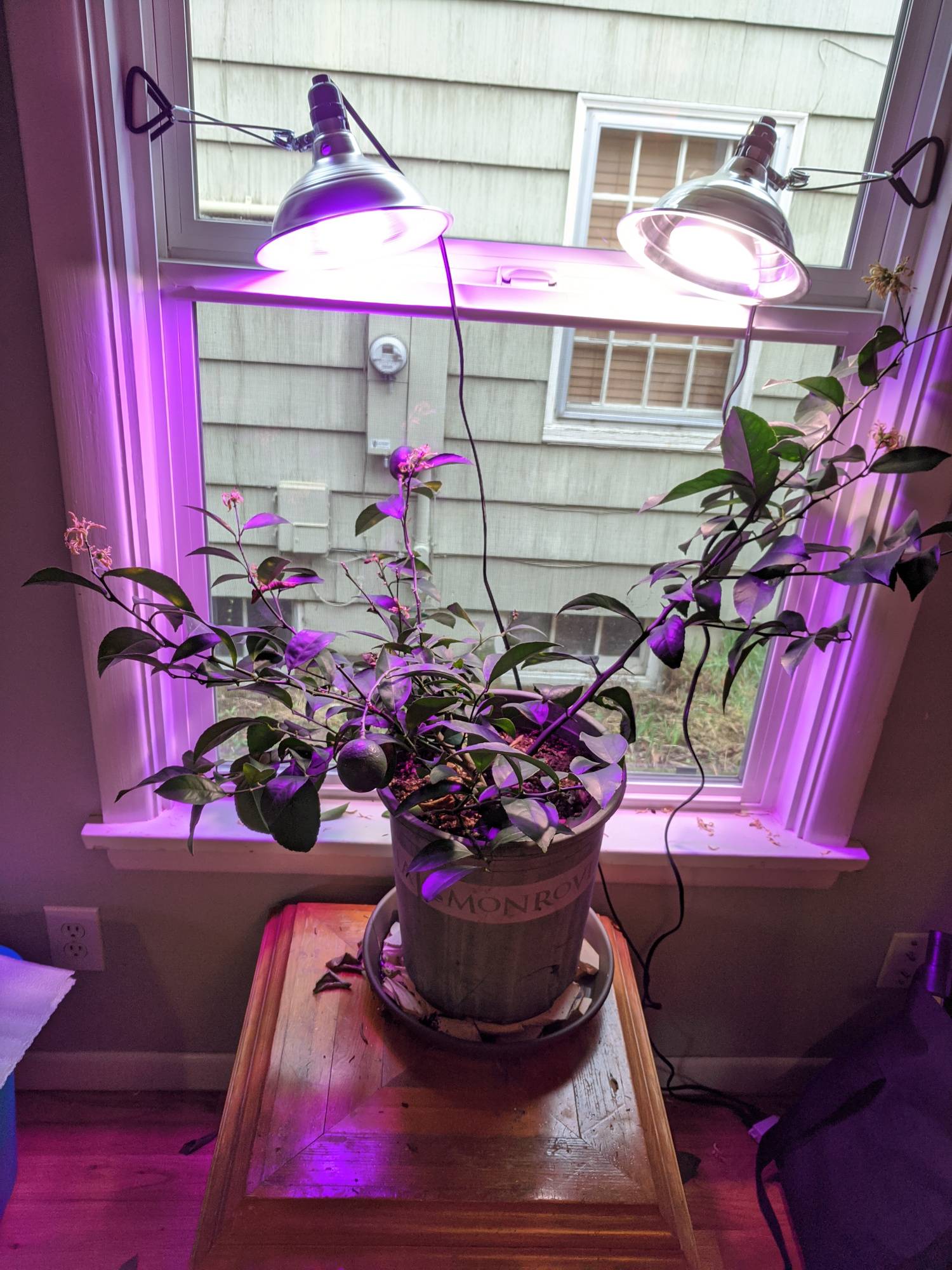 Meyer lemon in its pot with grow lights 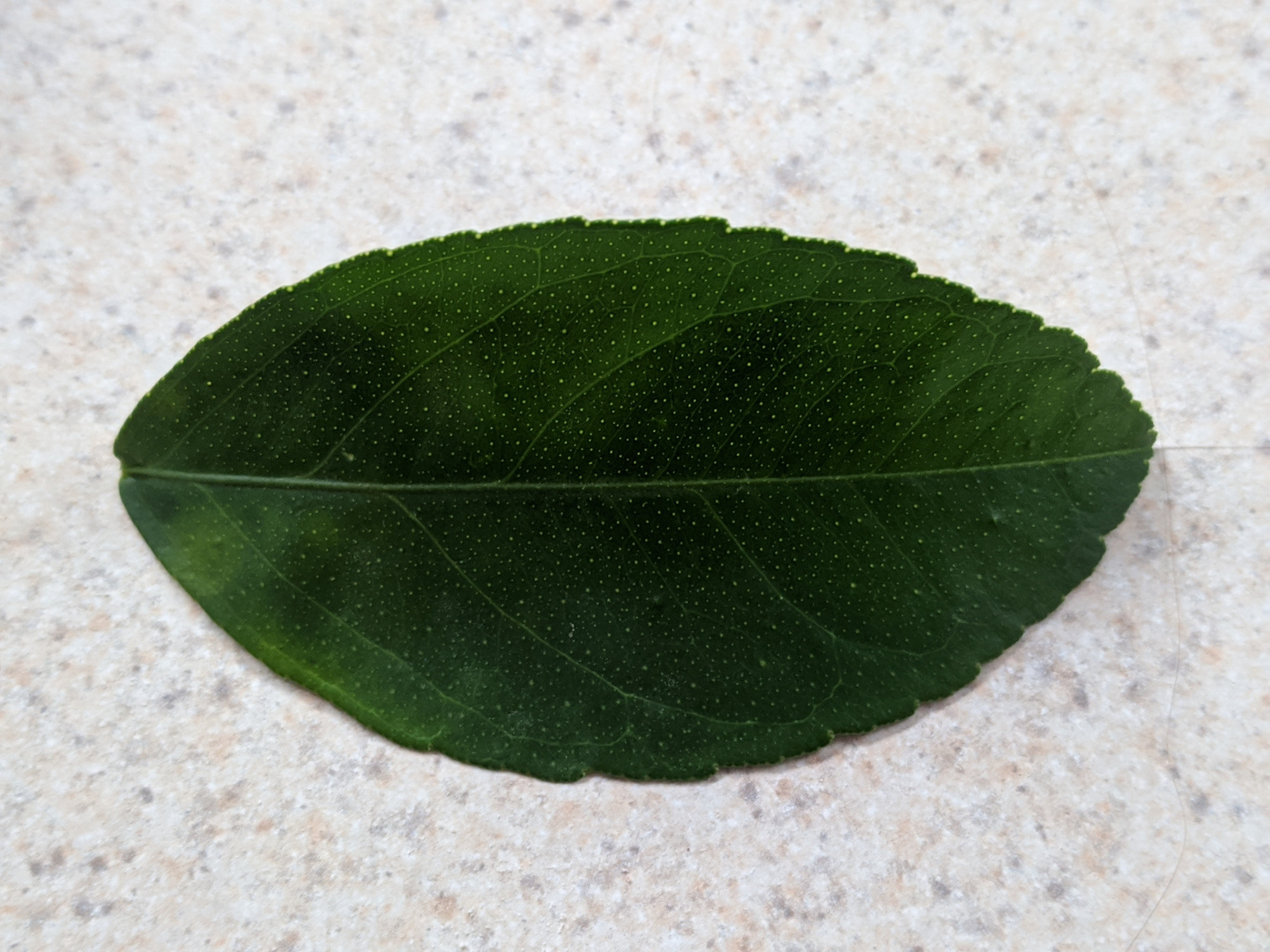 Should I be alarmed at the leaf-dropping? How do I get it to stop? Is this normal and will stop on its own?

The Meyer lemon is potted in a 2-gallon plastic pot, with a mix of the citrus soil that came from the nursery and some high-drainage raised bed mix. That pot sits on top of a tray full of crushed pottery for drainage. I've been watering it once or twice a week depending on how dry the soil feels. I may have overwatered it somewhat when I first brought it inside, but not since then. I've periodically fertilized it with a diluted general indoor plant liquid fertilizer; I'm going to try actually using a citrus fertilizer next as long as that won't make things worse. The grow lights are a 17W Sylvania blue/red grow light, and a 9W GE "balanced spectrum" grow light.

Thanks for any advice!

Browse other questions tagged indoors citrus lemons or ask your own question.

3
What to do with this Meyer Lemon Tree?
3
Why are my Meyer lemon's leaves yellowing and falling off?

4
Why didn't my Meyer Lemon tree produce fruit after it blossomed?
3
Why are my Meyer lemon's leaves yellowing and falling off?
7
Why do the leaves on my Meyer lemon have blotchy yellow areas?
3
Dwarf citrus Meyer lemon pot size
5
What type of grow light should I buy for young citrus seedlings
3
What to do with this Meyer Lemon Tree?
1
Meyer lemon tree coming back to life
2
Re-Potting a Lemon Tree: Almost all leaves turned brown on a hot day
0
Indoor lemon/lime - wilt leaves which yellow and drop