I bought this Calathea earlier in the year (UK based) and it’s recently started to show yellow leaves, see pictures.

It’s had about 3-4 yellow leaves now, all of them at the bottom of the plant nearest the soil. I’ve removed the yellow leaves as per advice I read online. The leaves aren’t crispy at all.

My question is why is this happening and is there anything I can do to stop it?

I have upped the watering of the plant as I thought Calatheas needed moist soil, maybe I went too far? I’m struggling to get the balance right when watering this plant. I use tap water, maybe this is the issue? I don’t fertilise this plant (it’s winter in the UK).

I’m aware the leaves need a clean which I will do shortly.

Any thoughts about the cause of the yellow leaves would be much appreciated. Thank you!! 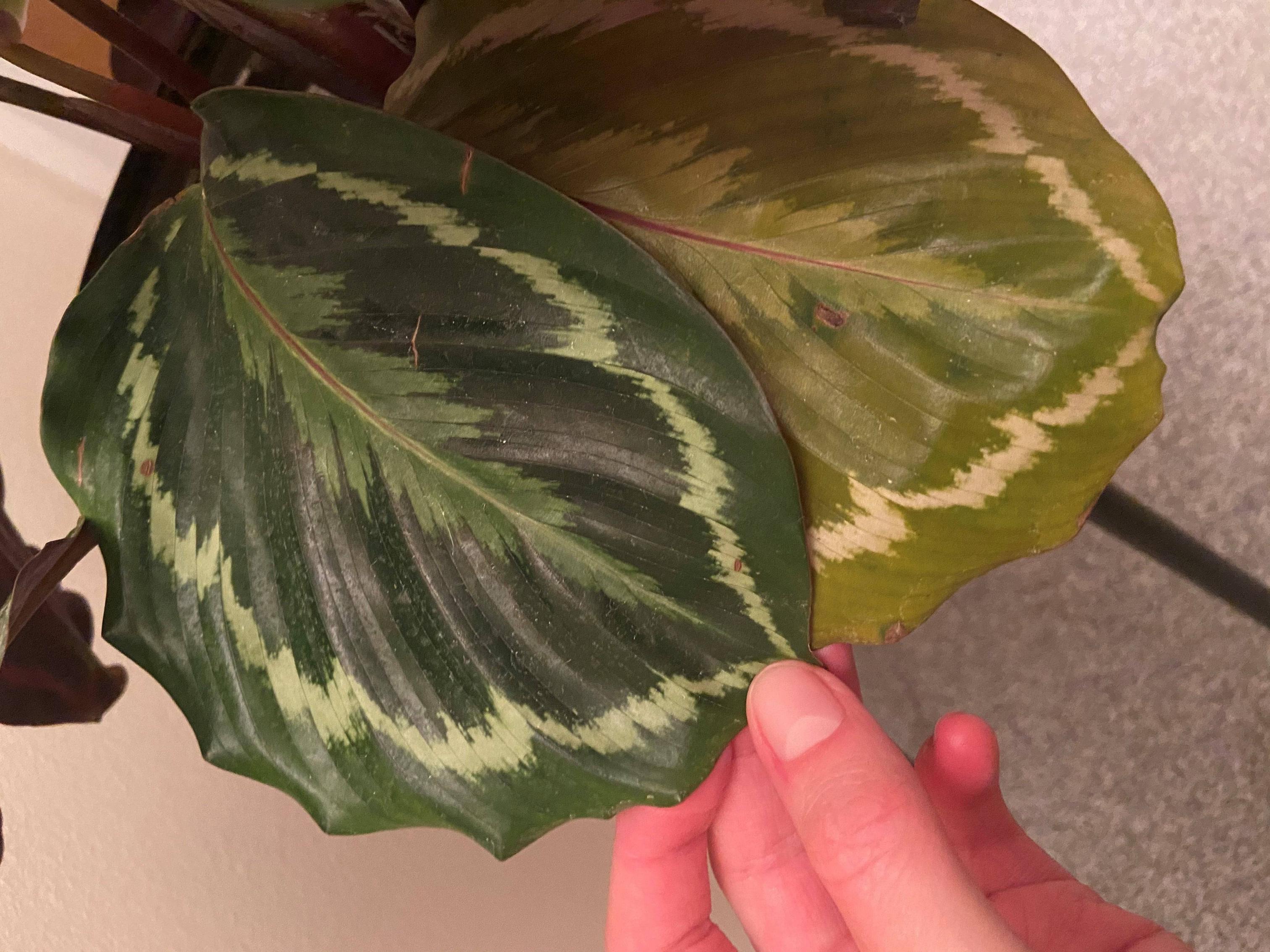 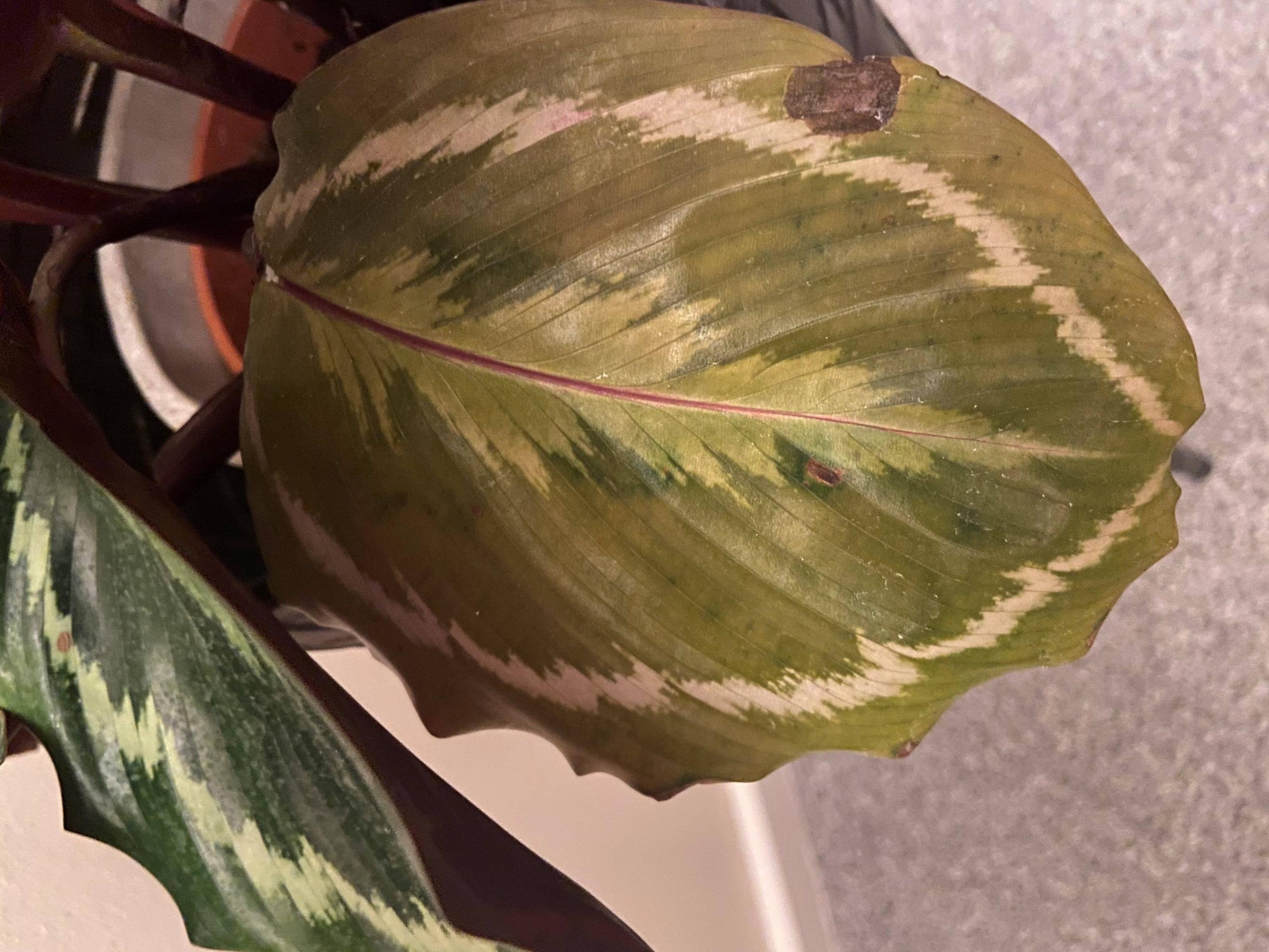 It is possibly not because of the tap water. That would cause mineral build-up in the tips and edges of the leaves which would lead to crispiness in those areas not yellowing in general.

Low humidity would cause similar symptoms as tap water, crispiness instead of overall yellowing.

Based on that you have upped the watering I would suspect root rot. You could try to remove the plant from the pot without disturbing the root ball too much to see if there is any rotted roots visible.

If there is rot you can try to repot the plant (even if it is winter) into a drier substrate. Make sure to gently clean the roots and cut off any rotted parts.

If you would not like to do such a drastic measure as repotting the plant, you could use diluted Hydrogen Peroxide to treat it.

From How To Use Hydrogen Peroxide For Root Rot?:

Root rot is most commonly caused by poor soil aeration or over watering.

Mix one part 3% percent hydrogen peroxide with two parts water and carefully pour it over the plant’s root system with a watering can or spray bottle.

This will kill off the bacteria which causes root rot.

Additionally, hydrogen peroxide will break down once absorbed in the soil, releasing extra oxygen and encouraging root growth by creating more space in the soil.

You may use this same mixture to disinfect potting mix or soil prior to planting.

If you do not repot make sure to gently loosen up the top of the soil with a chopstick or other tool to increase the aeration of the soil so it will dry faster. You can also consider moving the plant to a place where the soil could dry a little faster in general.

Not the answer you're looking for? Browse other questions tagged houseplants diagnosis plant-health plant-care prayer-plants or ask your own question.

2
ZZ plant has light spot on the leaves

4
Does anyone know what’s wrong with my Areca Palm?
0
Do plumeria with inflo need fertilizer to actually bloom?
0
White growth on the outside bottom of the pot
1
Snake Plant Questions
1
Sick Hibiscus Plant
1
Kentia Palm brown leaves
2
My rue plant is partially yellow
2
What causes yellow spots on Calathea Warscewiczii's leafs?
0
What’s wrong with basil plant?