What are hazards of cold weather and frost to tree seeds and seedlings in northern nursery?

I have never got a good intuition about threat of frost for these trees in my nursery. I have many seedlings in pots or air prune boxes, 6-12" soil depth w mulch on top. I am in zone 5 where we have already had 24 hours below freezing, and though it is warming up again, longer periods of frost are on their way. I am looking for information on what hazards cold and frost poses for these trees if any, under what conditions, and what to do about it. 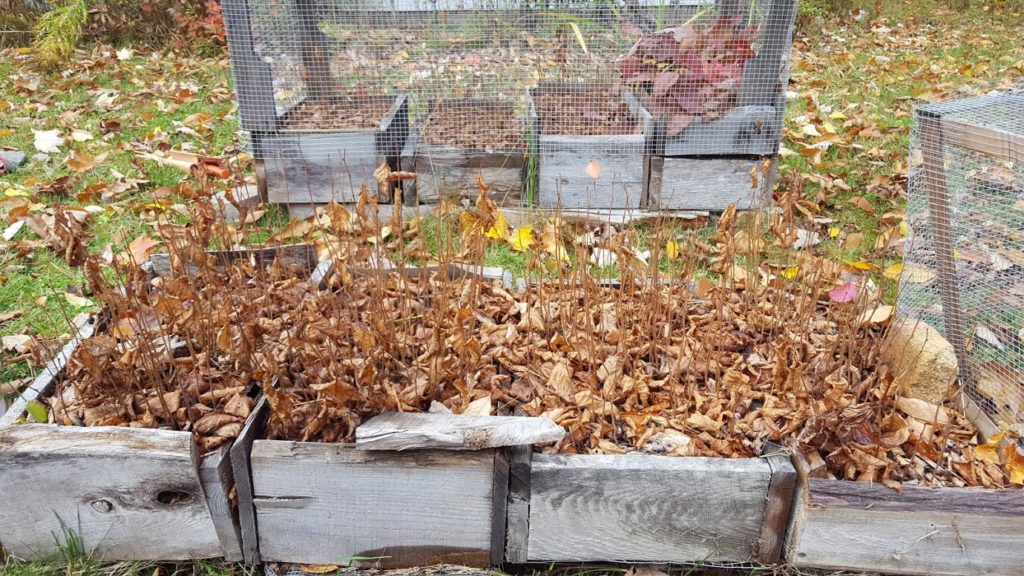 Potted trees and tree seeds needing cold stratification, sandwiched between mulch in buckets with holes on top and bottom: 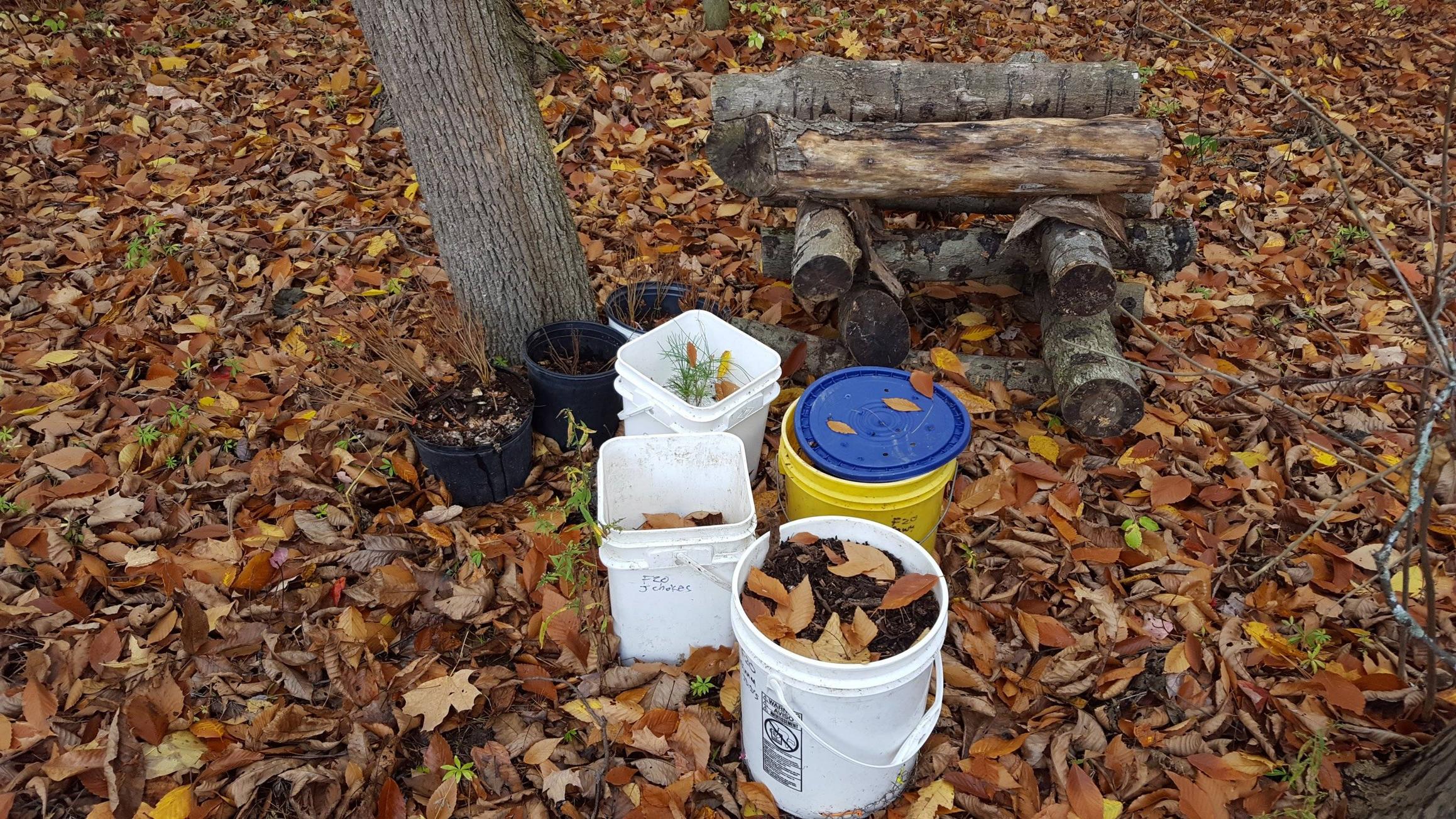 Are baby trees at danger from frost if they are not being moved until after thaw? As in, can air prune boxes hang out through a cold spell or even winter, or should I surround/insulate them with mulch or hurry to heel everyone into ground? I know one way frost hurts trees is due to roots cracking and snapping if moved when frozen, but if these seedlings are not moved until above freezign temps, what is the risk?

Is it enough to cover pots in mulch, on top and sides, to insulate? Or do the trees need to be in the ground, heeled in? Below is an example of a somewhat 'insulated' stash of potted trees and stratifying seeds. 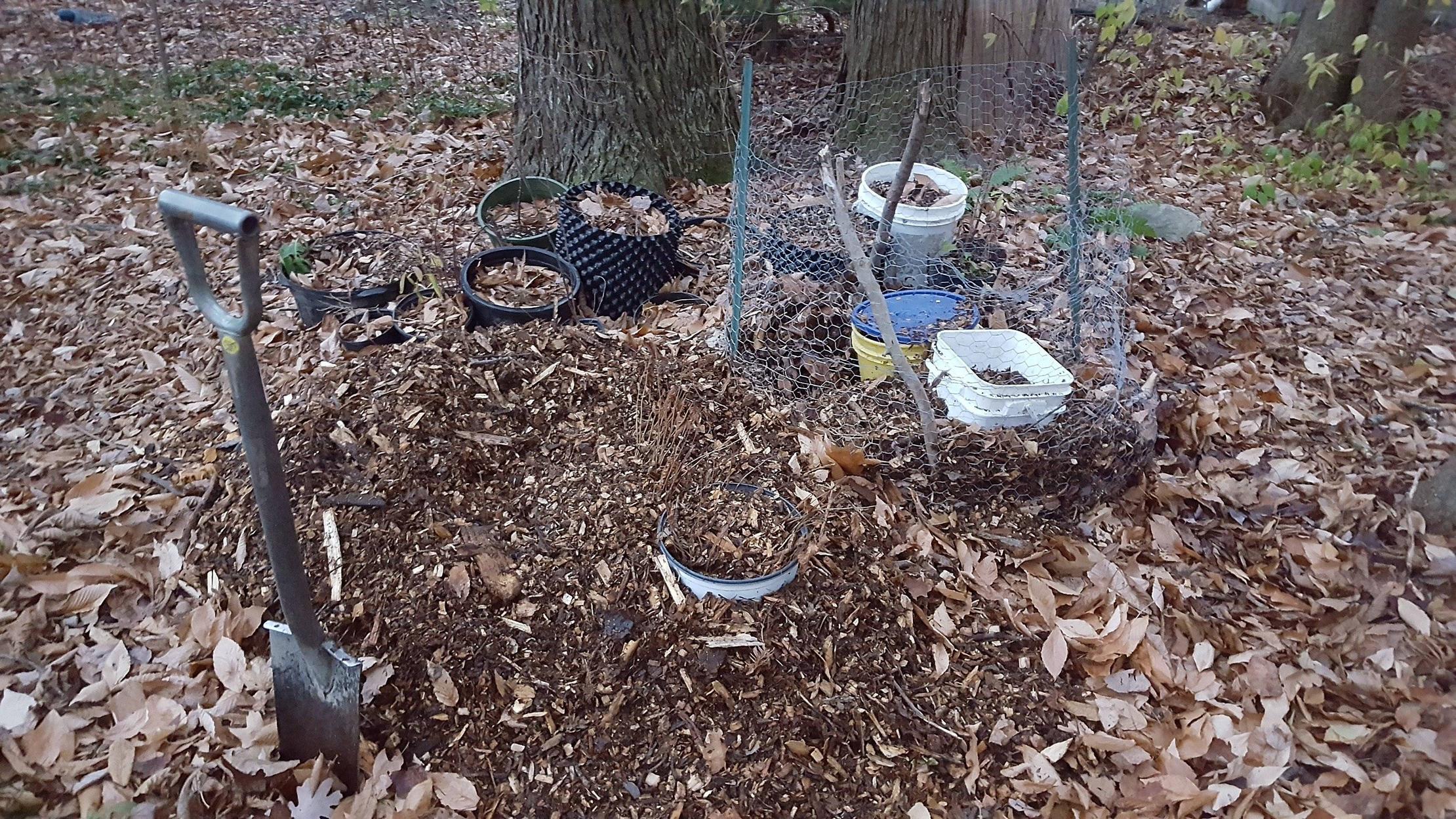 I realize it is a spectrum with uncertainty. When exactly soil freezes through including roots, versus just some frost on a pot exterior or the first inch of soil, is not precisely answerable. General insights would help me prioritize risk mitigation.

Based on my past Q&A (During a warm-spell in early winter, can dormant hardwoods survive planting? Even if frozen temps are a day away?) and experience since then, I see it is relatively safe to plant trees out in the cold as long as the soil is not frozen at root depth. It usually takes until January or February for the top inch to freeze fully, so I have months still to plant or heel in seedlings. What I'm unsure of is leaving seedlings in air prune boxes or heeled into pots.

I've worked in a couple of zone 4 plant nurseries, and we stored all of our perennials, shrubs and trees outside through the winter. To do this, we stacked the pots at a 45 degree angle. We used bricks keep the first row of pots at that angle, then angled the other pots on top of those, putting one pot in the gap between the two lower pots. This tended to form a low mound. The reason for the angle was to allow rain and snowmelt to drain from the pots and not freeze-out the crowns (especially for perennials). We added mouse/rodent bait in PVC tubes in every other row or so - if we didn't, then the mice and voles would feast on the plants.

Once all the pots and bait were in place, we waited until the pots had frozen solid (any rain would run off due to the 45 degree angle) and then covered the mound with a tarp. Onto this we layered maybe a foot of straw and covered that with another tarp, weighed down with flagstones. One nursery also baited the straw.

So yes, it's possible to successfully winter nursery stock such as yours outside in the winter. The main issues are preventing the crowns from freezing, the bark of woodies from being eaten/stripped by mice, voles, and rabbits, and the roots from heaving during warm spells.

In your case, you could follow a similar process on a smaller scale. It's very important that you let the pots freeze solid before covering them, though. I'd also group the pots in an area shaded by evergreens if possible; if not possible, then group them in an area where they get some shade from the branches of mature trees (keeps them cool during warmer, sunny winter days). Remove the tarp when the average low temp reaches the low 20s F. Keep the mound in place and baited, though, until the pots begin to thaw. For added rodent protection, you can cover the mound with hardward cloth (1/4" steel mesh).

The crown-freezing I'm referring to is what happens to the crown (or root-crown) of the plant if a pot is left upright, freezes, and then fills with snow (or rain). When the snow melts during a warm snap it turns to ice after things cool off, which then eventually melts in late winter. The plant tends to sit in this lake of meltwater for some weeks as it "wakes up" in the spring. This easily kills the crowns of most perennials and may also harm woody plants.

Mulching a pot or garden soil AFTER it freezes and then removing the mulch in the spring should not hurt your trees or perennials at all, but, if you're storing pots under straw and tarps, I recommend that you should bait the storage area to keep the rodents from both nesting in the mulch (they'll move it around to form a nice home) and then from eating/stripping the bark.

1
During a warm-spell in early winter, can dormant hardwoods survive planting? Even if frozen temps are a day away?

4
What is this perfumed arbust and can it survive deep frost?
11
Why should we cover rose plants in the winter?
12
Why shouldn't I water a Blue Spruce tree during and after transplanting it?
4
Moved tree nursery in Fall, new area has heavy deer browse, how to protect the baby trees?
2
Can trees be propagated/started over winter indoors, or would that 'tire them out'?
1
During a warm-spell in early winter, can dormant hardwoods survive planting? Even if frozen temps are a day away?
1
Potted trees stored in cool basement are leafing out early, what to do?
1
How good are seedlings at bouncing back after cold weather?