Probably due to the age of the house (~30 years old), a lot of weeds now grow in between pavers in my backyard. I read that I can use polymeric sand to fill in that space, but that sounds like something that I may need to redo every a few years and would also not apply for the places with larger spacing (please see pictures below). Can I use quick set concrete instead? And are there other good ways to deal with this? If possible, I would like to avoid using chemicals like glyphosate as there is a pool nearby.

Also anyone recognize the weeds in the pictures? 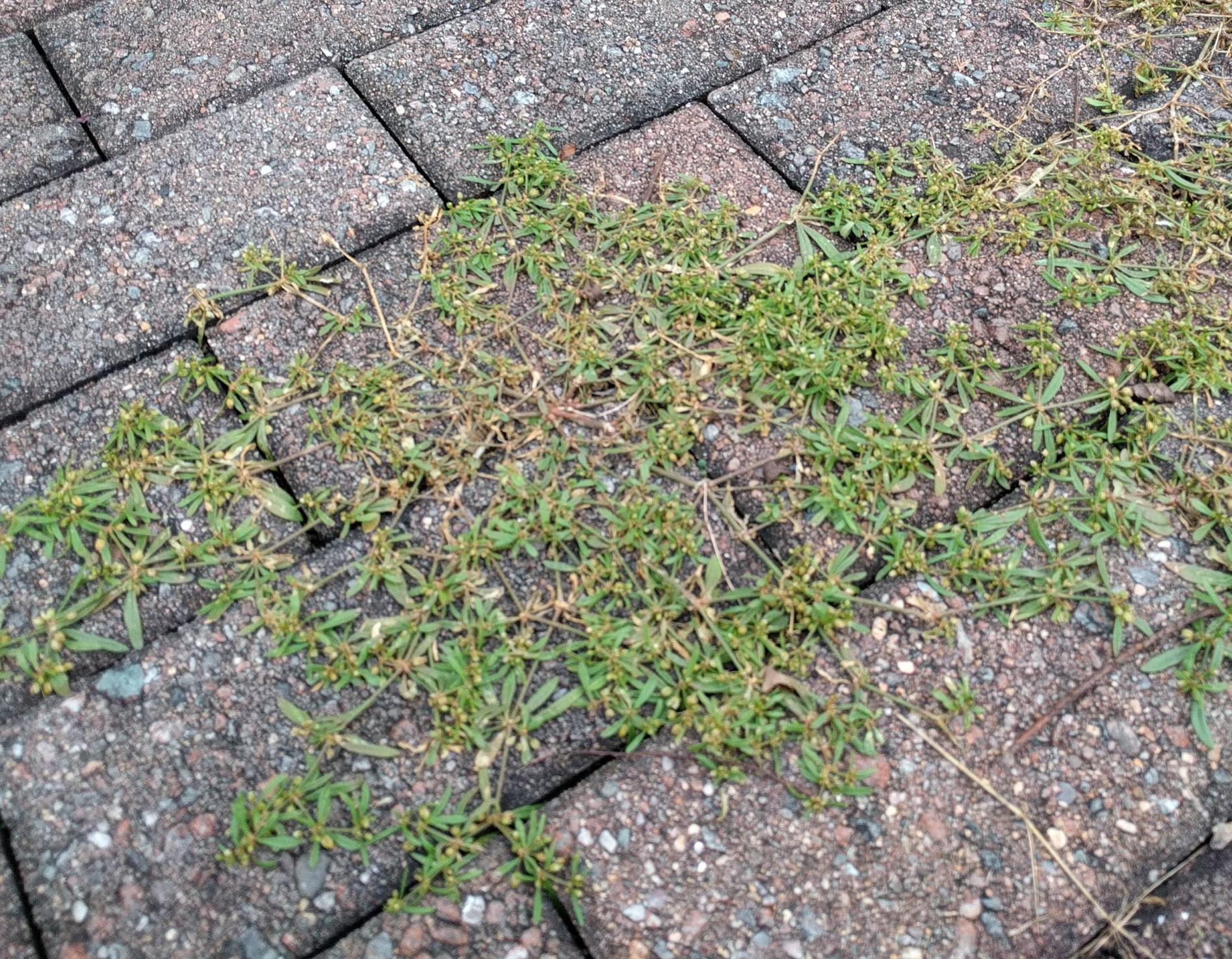 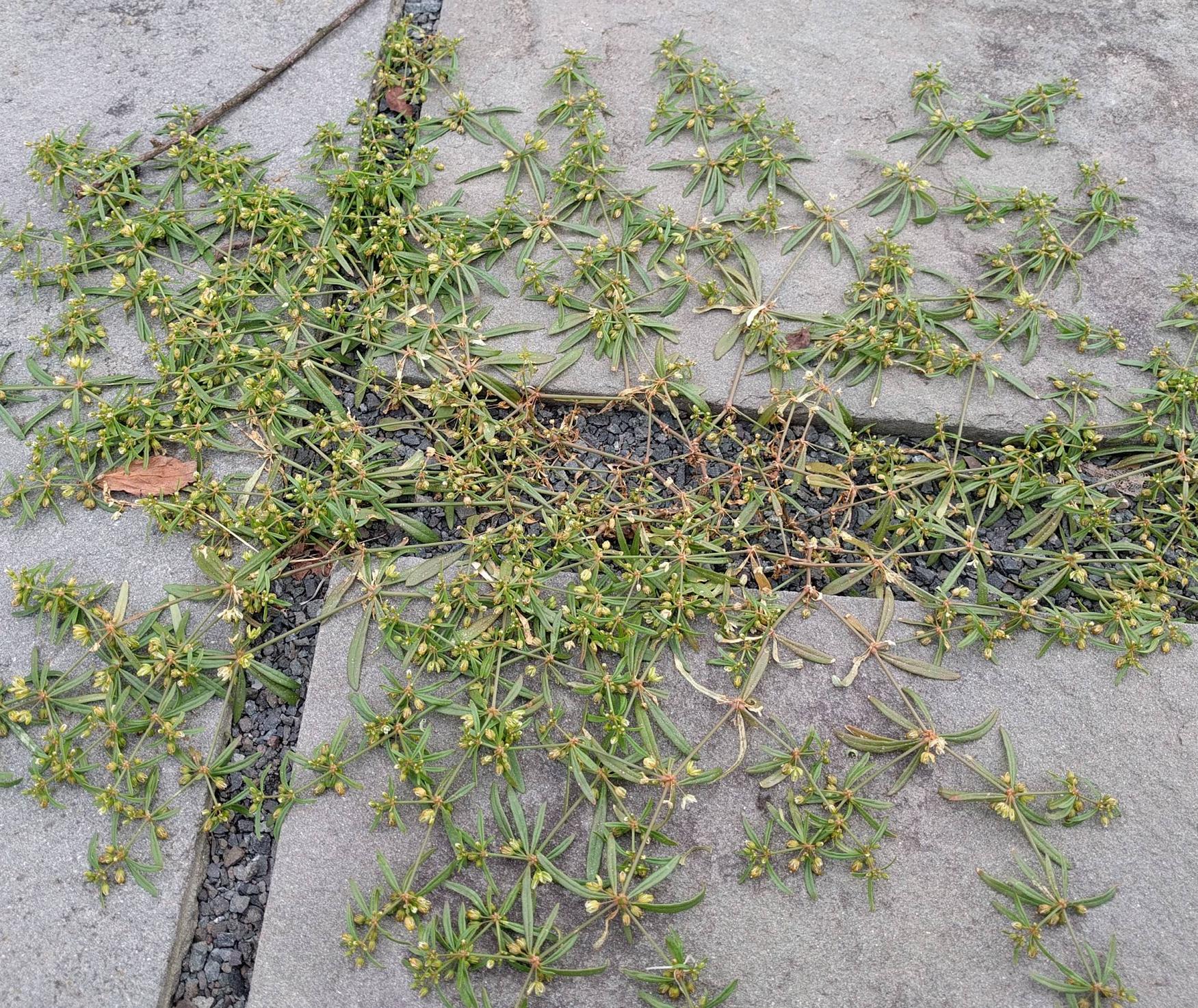 Your photos show two different types of paving; the top photo shows block paving, which is laid on sand with the blocks closely laid and then infilled with polymeric sand using a whacker plate. Whilst this type of paving is helpful to the environment because it's semi permeable (allows water to dissipate between the cracks, reducing flood risk from heavy rain generally) it does inevitably, over time, get weeds growing in between. It won't be possible to use a mortar mix to seal the gaps, particularly as it is not laid on hardcore beneath. In the UK, it's usual to apply a long acting path/driveway weedkiller such as Pathclear to the cracks in mid to late spring annually - this prevents growth for up to 4 months. This is done to avoid having to blast out in between gaps and reapply polymeric sand with a whacker plate (vibration plate), though this latter provides a much longer lasting solution.

The other paving looks as if its laid on soil, with large gaps between, If it has no harcore or concrete beneath, consider deliberately planting low growing plants in the gaps to prevent weed invasion. It depends on the climate where you live what type of plant you can use and to some extent how much foot traffic the area gets - clover will tolerate being walked over quite often, as will Soleirolia (or Helxine, sometimes known as mind your own business, see here https://www.rhs.org.uk/plants/17471/Soleirolia-soleirolii/Details) but there are other plants which can be used for lower traffic areas - see here for some suggestions https://www.flowerpotman.com/plants-for-soil-type-and-conditions/plants-for-pathways/.

UPDATE: GailD has not actually suggested just concrete, she is talking about a dry mortar mix, which is just sand and concrete well mixed together in a particular ratio. I have used this method myself with ordinary pavers spaced about quarter to half an inch apart, brushing it into the gaps, then gently pouring water over and it works well, assuming weather conditions are right. However, it's not clear whether you think you want to do that for the block paving, but bear in mind block paving is meant to interlock closely leaving a wafer thin gap in between each block which is not intended to have mortar between. The other answer suggests using a funnel to get the mortar mix in the gaps, but as I said before, a vibration plate is normally used because it's very difficult to get anything to go down in between the blocks.

If you have just a few weeds, you can kill them by pouring boiling water on them. Of course in larger numbers this quickly becomes very time consuming, as you keep having to return to the kitchen, refill the kettle, and wait for it to boil again. This will work for shallow-rooted plants. If you have deep-rooted weeds, boiling water will kill the leaves but not the root, so they will regrow from the root. I don't know what weed you have there, but it looks to me like a shallow-rooted one.

A weed torch is perfect for killing weeds growing between stones. You can use a basic blowtorch, or get a specialized wand that attaches to a propane tank. Various models are sold as weed torches or as ice torches (intended for melting ice from steps or a walkway). The trick is not to actually light the weed on fire, but to hold the flame several inches away until the leaves loose their glossiness. This way, you destroy the outer coating of the leaves, so the plant loses all its moisture to evaporation, which kills off the stems and roots as well as the leaves.

Or you can use a vinegar weed killer, which is just highly concentrated vinegar (usually about 20% acetic acid, much stronger than the usual 5% stuff used for cooking and cleaning). Keep in mind that the concentrated stuff is hazardous to your eyes and skin. So make sure not to apply it on a day when people will be walking around the area barefoot. It will also make the area smell like vinegar for a while (this article says the smell will linger for a couple days). The good news is that if any of the vinegar does migrate into your pool through rainwater runoff, it will get diluted along the way.

Of course, there's always hand-weeding. With weeds that spread out really flat along the paving stones like that one, it can be helpful to first sweep the area with a push broom. That will pull some of the stems up away from the pavers and make them easy to grab.

Once you get weeds cleared out, by whatever method, you can do any of several things to help prevent regrowth.

Fortunately, both concrete and Preen are relatively inexpensive, non-toxic, and removable.

I have personally used both methods with pavers laid on soil and/or builder's sand and found them very effective. I recommend getting a stool or something low to sit on while pouring concrete through a funnel in order to save yourself a backache...just scoot along and fill the voids.

The space between your pavers is a perfect place for wind to blow in some soil and seeds and something will start to grow. Removing existing weeds is simple, but keep in mind that this process will repeat itself. You can try to prevent accumulation of soil by removing any gaps that can trap soil, but that seems like a lot of work, pulling out a weed when it just emerges is easier, I do mine after a rain - weeds slide right out of moist surface.

I mix 2 parts distilled vinegar to 1 part water into a 2L spray bottle. Then I add ~3/4 tbsp of salt and mix. (Sometimes I also add a little dish soap, too, but have found success without it).

I've found a lot of success with this concoction on weeds growing in various substrates (rock gardens, soil, cement cracks, and lawn). It has worked on dandelions, plantains, purslane, bindweed, and even poison ivy growing rampant in a window well!

7
How to get rid of Smilax aspera
6
Identification and Removal of Rogue Plant
6
Preparation for a new lawn to prevent weeds and encourage growth
3
Amending a barren yard with compost: dedicated weed barrier or no?
5
Looking for plants to out-compete poison parsnip
5
Paver bricks -- handling weeds without bad chemicals
7
What is this weed and how do I kill it without killing the grass?
1
How to/should I get rid of these weeds