What Is This Low-Spreading Plant w. Palmately Lobed Leaves?

This plant is growing wild on our property in the Santa Rosa Plain in Sonoma County, California. It has 5-lobed palmate leaves with notched edges and small pink flowers. Low-spreading plant seems to thrive in our very dry adobe soil, familiarly known as Petaluma crack. I'm considering digging up a few of the plants and relocating them to an area where we need drought-tolerant ground cover. 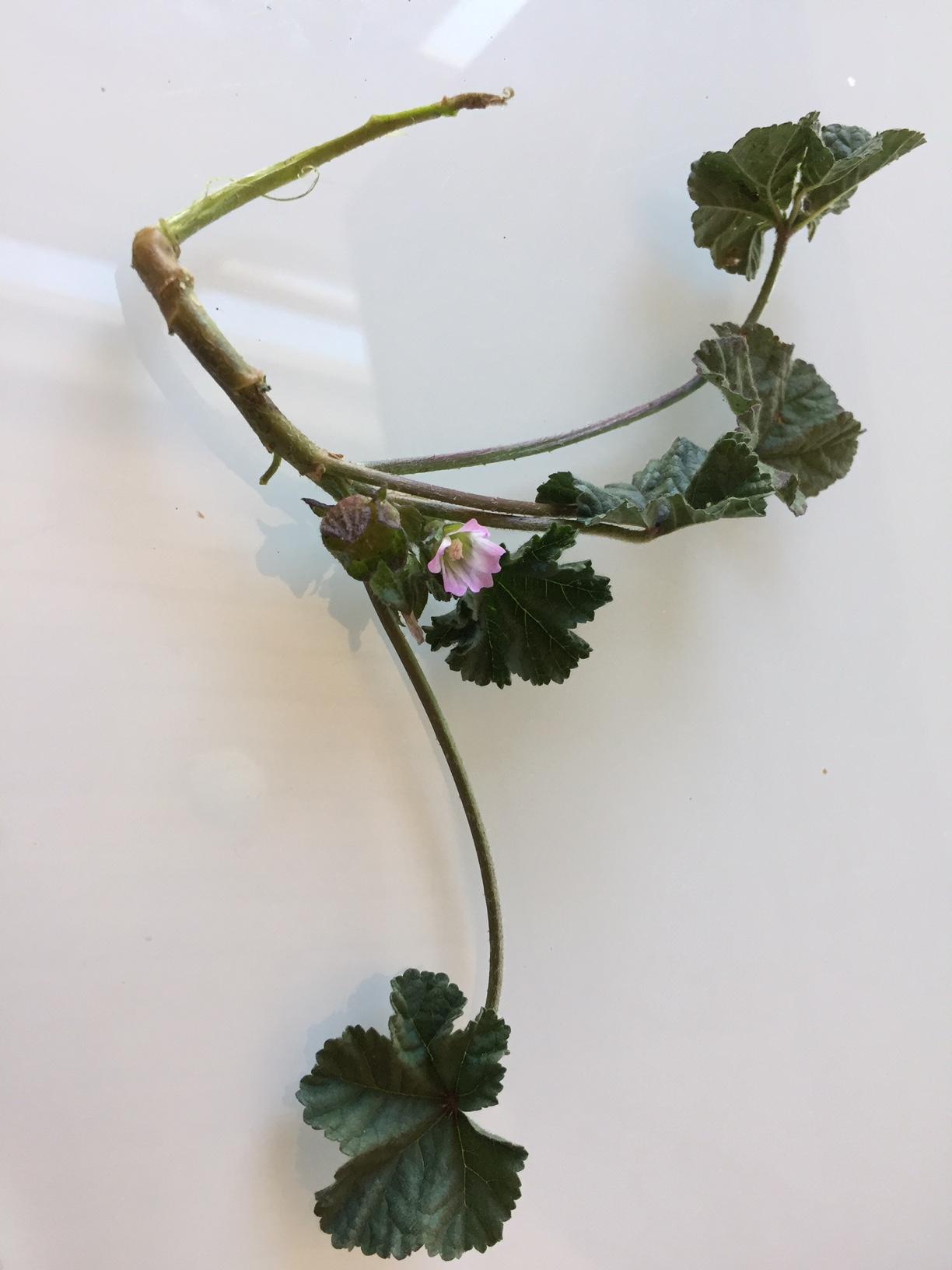 The flower indicates that this is a mallow, not as I immediately thought a perennial geranium. So, which mallow? I first thought that the plant was a species of Malva—maybe M. pusilla or M. parviflora, but neither the height nor the flower of these two matched your photo. This is actually a good thing because Malvas are non-natives that are generally considered to be weeds. I then ruled out Alcea because those are hollyhocks, and settled on Sidalcea.

I think this is the likely winner as there are a number of species native to California. They appear to be broken out into Northern CA and Southern CA species. I think your best bet is Sidalcea calycosa (annual checkerbloom). This is actually not an annual, but a perennial. Unlike the Malvas, it is also not a weed, but a wildflower native to Sonoma County. It has pink flowers very much like the one in your photo, but lives in a wetland habitat, not in adobe-like clay.

Another possibility is Sidalcea reptans (Sierra Checkbloom), which as the common name suggests grows throughout the Sierras. It's also a California native but would have had to have been transplanted or brought into your site from a native plant nursery. Again, the flowers are very much like the ones in your photo. The species name of reptans indicates that it's a creeper (it's rhizomatous), but it does get about 18 inches tall in bloom.

Typically, all of the Sidalceas flowers on stalks, so if yours only flowers in leaf nodes then I'm incorrect.

There a ton of possibilities in the Malvaceae family. An excellent resource for you for all plants in California is Calflora. According to that source. here is a list of all members of the Mallow family found in the state. If you click on a plant's botanical name, you get more information, including a map showing where in the state the plant is found.

Thanks to Calflora (and Occam's Razor), I think what you have is possibly Malva neglecta. The notch in the top of the petals would be a decent indicator for this plant (hard to see if it's there in your photo). Calflora shows this plant to occur pretty much everywhere in the state, including Sonoma County. Unfortunately, it's considered a weed - not sure if it's "invasive" in California.

Not the answer you're looking for? Browse other questions tagged ground-cover or ask your own question.