Will California poppy seeds mature off the host plant?

I am trying to harvest California poppy seeds to be used next year. Living in Northeast Ohio, the tendency for these plants is to be an annual. Presently (late October) I've got lots of green seedpods, but can't find any that have become brown. I "think" I need to harvest what ever seeds or seed pods I can get before frost/freezing/snow hits the area, however I can't seem to get a clear idea if I should wait til the pods (still on the plant) turn brown and are ready to "pop".

Can I take remove these green pods (with a bit of stem) and let them dry and mature in a dry (garage or basement) to harvest viable seeds for next season?

This USDA planting guide for California poppy has this information about seed collection, storage and planting (emphasis mine):

Through the domestication process and the selection of horticultural traits, most complex seed dormancy requirements for garden variety California poppy have been reduced or eliminated. Domesticated California poppy seed germinated consistently... Any remaining seed dormancy can generally be overcome by sowing seeds in the fall as day-length decreases in locations with mild winters, or seeds may be sown in early spring in areas with harsh winters.

So as long as you grew your poppies from a seed packet or bought them at a garden center, they should be pretty easy to propagate from seed. That means you don't need to cold stratify the seeds, or treat them with smoke or acid or any of the complicated methods that can be necessary for some plants. (But if you grew your original plants from wild-harvested seeds, you may have to work harder to to convince them to germinate. See the planting guide I linked to above for details.)

Seed may be relatively short-lived under room temperature storage, perhaps maintaining viability for about five years

This article has good photos and detailed instructions for harvesting seeds. They show what the mature seed pod look like, and how to distinguish mature from immature seeds. Mature seeds are brown; immature seeds are green. The mature seed pods turn brown and develop long grooves down the side as they dry out. The author is based in California, so it's not clear from this article whether the seeds will mature on the plant in the shorter growing season of northern Ohio.

Here's what the seeds look like inside a mature seedpod: 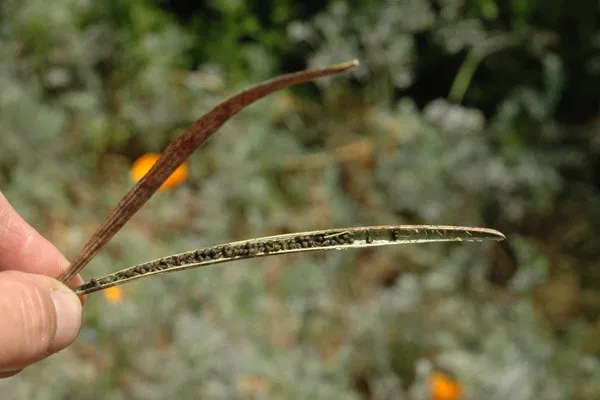 This plant may seem like it is a perennial, coming back in the same place every year due to self-seeding.

Which implies that it may self-seed without any assistance from you. The Cornell guide doesn't specify what region it's for, but presumably the advice would at least apply Ithaca, NY where Cornell University is located. Ithaca has a similar climate to northeast Ohio, if anything slightly colder and snowier. So it seems fairly likely that your California poppies will self-seed without any effort on your part.

Based on the information I found, my recommendation is to hedge your bets by treating the seed pods in 3 different ways:

Store the seed pods you harvest indoors in a cool, dark place in paper bags. Clearly label the bags so in the spring you will know which ones you harvested early and which ones you harvested late. The pods may pop open and release the seeds into the bag, so be sure to close the bag fully and use a bag without any holes. In spring, plant the seeds after the first frost. Sow them shallowly, 1/16" deep or just scattered on top of the soil and maybe covered with some straw to stop birds from eating them. Plant the early-harvested seeds in a separate place from the late-harvested seeds, and plant both away from the original plants, so you can see which method is more successful.

18
How do I prevent the seeds on my Japanese Maple from falling off?
11
Why did the stem suddenly weaken in my oriental poppy?
13
Is this plant some kind of Poppy?
24
Can I harvest vegetable seeds and store for the next year?
8
Will sunflower seeds that have been left out all winter germinate?
5
What is the minimum amount of space needed to grow a poppy?
4
Harvesting sunflower seeds and planting the same year
3
Harvesting tomato seeds and planting the same year
6
Can I harvest and plant vegetable seeds in the same season?
2
Does seeds from two tomatos from the same plant share the exact same genetics?