I'm looking for the ideal plant for a privacy hedge to block our land from the road. I'm hoping I can make lilacs work, because we have a free source from a friend and I really like the plant. Plus, they're deer-resistant, a huge plus. The planting area is open, fairly well-drained, and full sun, but close to the potentially salt-ridden road. USDA zone 5a.

I'm worried that the lilacs won't grow thick enough in the winter to provide a good visual barrier. Does anyone have experience with winter lilacs and/or lilac hedges and know how thickly I'd have to plant the bushes to get a decent winter privacy hedge? Two thick, three thick, more, or not feasible?

I actually have a lilac privacy hedge alongside my driveway (zone 5). Here's a far shot (note that the bare spot in the middle is from a missing tree - EAB killed it years ago). 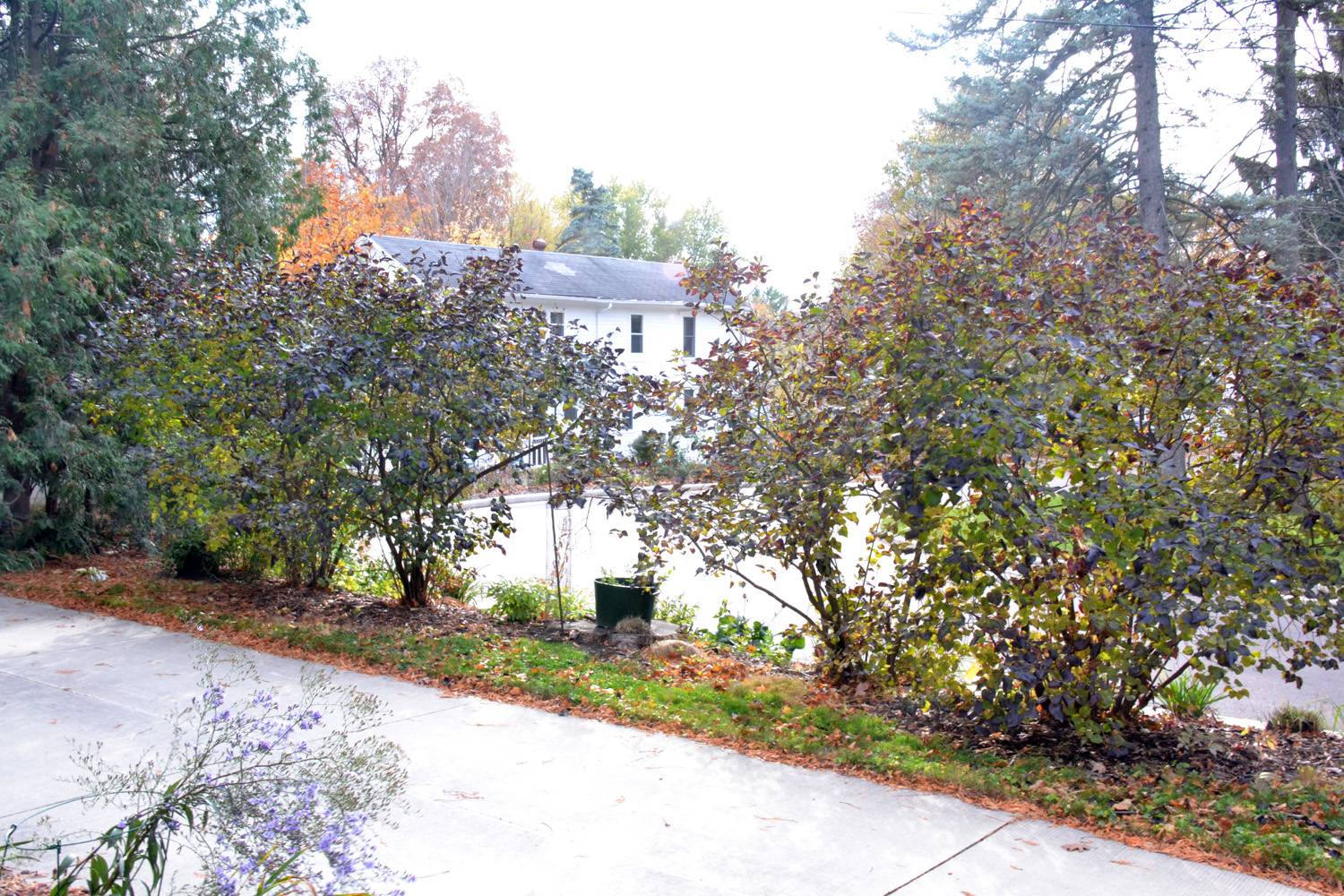 It's meant to screen the house from a side street and does a decent enough job, but I don't know that it would be a great winter screen for a backyard, as it is a bit "open". The variety of lilac you choose also makes a difference. Mine are a hybrid - I think they're still Syringa vulgaris, though, so they're probably the thickest cultivar you'll find (for a contrast, French lilacs don't really sucker and are therefore "thinner").

Here's a closeup of one of the four shrubs. This one still has about two-thirds of its leaves, but should give you an idea of what you can expect in the winter: 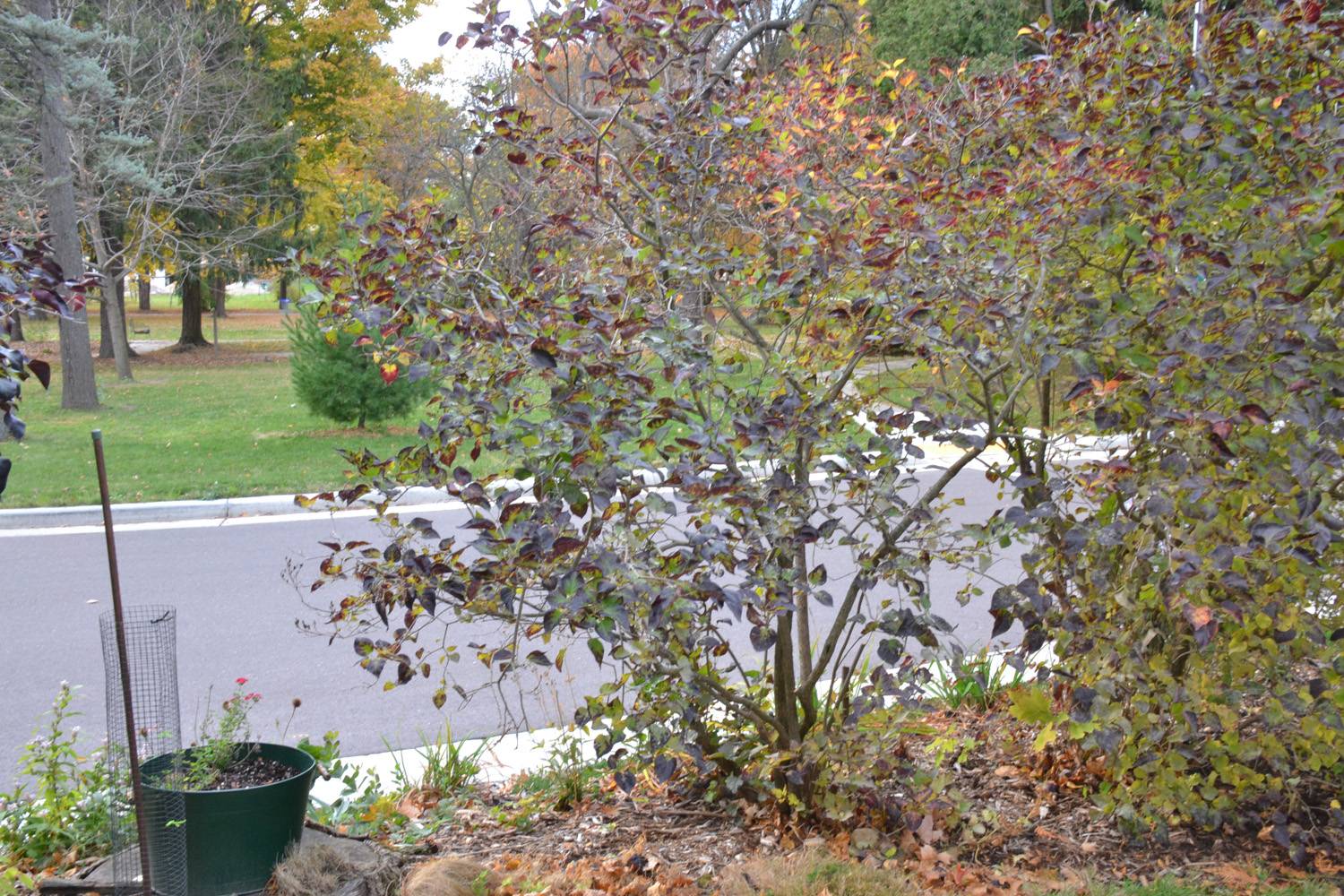 The lilacs are about 6-7 feet from the side street and have not been affected by years of road salt, so you should have no worries there. One nice perk about this as a driveway hedge is that it allows me to shovel or snow-blow snow directly onto it - the snow filters through the branches, which are also strong enough to take the snowload without breaking. If it were evergreen, then the snow blown off of the driveway would either settle in front of the shrubs and in a bad winter would be difficult to clear after a few storms or would be damaged by the snowload. I'm not sure if this is a concern for you.

One note - my hedge doesn't have any snowed plowed onto it. I assume that if it did, then the plowed snow would break branches, but this would be true with any shrub, I think.

If you're now wondering whether this kind of hedge is right for you, I encourage you to look at a Hedge Cotoneaster, if you have the room for a 10 foot wide shrub or feel like trimming your hedge ever year. This shrub has a much denser branching pattern and so is more effective as a winter screen. It has smallish glossy dark green leaves, very small pink flowers, somewhat showy small fruits, and fantastic fall color. I had these as a hedge at a different house (zone 4) and they worked great.

Lilac will drop the leaves, the branches and twigs will give some privacy. Conifers are needed to completely block the view . My experience is deer not eat conifers. Depending on the exact conditions , rhododendrons retain their broad leaves, but they are slow growing. In that area , I found spruce grew well and made a barrier in a few years.

Not the answer you're looking for? Browse other questions tagged hedge lilac or ask your own question.

5
What is the best privacy hedge for the US northeast?
5
What privacy hedge plants create little shade?
1
Continuously replacing privacy garden hedge while maintaining privacy
1
Will Cedar Hedge pruned in dead zone grow back?
2
What distance can a cedar hedge be planted next to a frost fence with privacy slats