Looking for some recommendations on the best pot to re-pot my Dwarf Umbrella Tree into indoors.

I’ve read that my tree isn’t happy due to over watering, current pot has no drainage so I think that’s the issue. Current pot is 40cm or 15inch diameter, so I need recommendations on something large that will make my tree happy again, She currently stands at 6ft 4 from soil level, but I’m sure she’s got more in her.

If anyone has other care tips or can explain the drooping with weird gap that’s appeared, please help too. 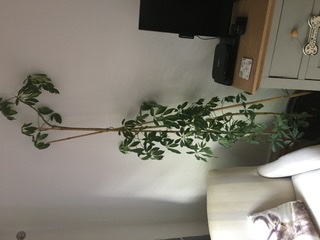 If the pot is a foot deep and 15 inches wide, a larger pot doesn't seem called for - turn it out of its current pot to check whether it's pot bound or not. If it is, you should be seeing a solid ball of root material, with roots wrapping round the outside, in which case it does need larger pot, but only one or two sizes bigger at most and with drainage holes.

The plant does need a bit of attention otherwise though - it's hard to see detail clearly because the photo is a bit small and doesn't magnify too well so I can't tell if it has any problem with insect infestation such as scale, but I can see enough to say chop off the bare top stems, back to a healthy leaf. If you like, you can shorten each stem you've cut off down to about 6-8 inches, pop them in a bottle of water on a windowsill,keep the water topped up and they will form new roots in about 6 weeks, at which point you can pot them up and have a new plant.

The reason I asked about daylight is because the stems look as if they are tied together, so possibly aren't thick and strong enough to stand up straight on their own, but perhaps that's not the case. If they are a bit weak and thin, cut back lower down, again above a leaf, so that you have strong stems for new growth to appear from. If the plant does need repotting, then do that using new potting soil; if not, you could gently remove some of the loose soil, take a new pot of a similar size with drainage holes and pot up into that, filling in with new potting soil. Water in well, allowing excess water to drain away freely, then place into whatever tray or outer pot you are going to provide for it. However, if the rootball is very small with lots of loose soil around it, it may need a smaller pot.

Ongoing, water when the surface of the soil feels dry to the touch (but not so dry it's shrunken from the sides of the pot), water well, then empty the outer pot or tray after 30 minutes, when the excess has drained out. If you are in the northern hemisphere, apply some houseplant fertilizer suitable for foliage plants once, then don't fertilise again till mid to late spring.

Not the answer you're looking for? Browse other questions tagged repotting or ask your own question.

6
What's the fastest way to dry peat before re-potting an overwatered succulent?
5
Do succulents need to be kept out of the pot for some time before re-potting?
4
Do's and Don't's for re-potting a plant?
5
Does my Aloe vera plant need a new pot?
3
Oak Tree Seeding
3
How long do I wait to wire my ficus bonsai after re-potting it?
0
Can I approximate bonsai potting soil with regular commercial ingredients?
3
dracena mass cane is dying… I think? Can anyone give me advice?
1
Need help on shoot separation
0
Succulent in need of repotting