Given some unstable climate in many parts of the world last several decades, are climate zone maps change?

In particular, was there any change in this map recently: 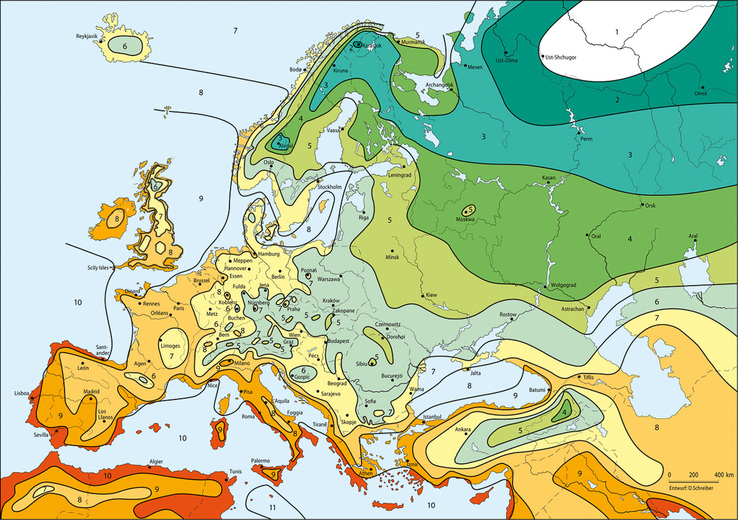 This is a map of Europe. Hardiness zones in Europe don't works so nice as in US, so there is also some editing and improvement. And we have no official map, so people are using external data to create it, so you get different maps (and here in EU we do not have so much "open data" from governments).

So, maps could change, because temperature is rising, but it should not be so noticeable.

In any case, the original map (in US) was about crops, which are very different then garden plants, where geographic features (e.g. hills), exposition (so direction), and walls could change hardiness. Crop are open field, and large, so most of that doesn't matter. So never trust much hardiness maps for gardens.

But as I said, this is Europe: the original definition of US hardiness zone doesn't work well: we have a much more effect from seas (so much less continental climate then in US), so we have plants which suffer more cold temperatures because higher humidity, and on other hand, many other plants which suffer much less cold, because we have a shorter period with very cold temperatures.

[This winter, end January, beginning February we had a lot of daffodils near London. But maybe your map is correct, it tell us that London has climate like south of Spain, Turkey (the sea location British people go for summer), and Tuscany. Maybe British people should review their holidays patterns, or maybe such map about minimal temperature is not so useful for gardening]

Your map seems derived from some temperature maps (you see the heat island effect, on main cities). Old maps were made manually, with some climate data, but not so precise, and some people try to adapt to Europe gardens (so not just using temperature, but checking what you can growth in US in a zone, so put the same label in EU where you can growth the same plants).

Copied from the site linked to above (http://georgiavines.com/hardinesszones/hardinesszonemain.html) because the maps are well down the page.

Anecdotally, I can say that my area of Wisconsin (southwest of Milw) experienced two zone 6 winters out of the last three years. I would not, however, expect another US map to be released unless there's a change in the federal government.

I would confirm that, to my knowledge, there is no new plant hardiness zone map for Europe. In the UK, we have a maritime climate which makes it very variable and somewhat unpredictable, so although the average winter temperature might have gone up a couple of degrees, that does not mean we will generally not get much colder temperatures in winter. That said, your map is slightly different from the one I have, which shows the UK as primarily Zone 8, apart from coastal parts in the west - yours shows the London area and the south coast as Zone 9, so that seems to be a small change and likely means your map is more up to date than the one I have.

Generally, plants are not sold here with a zone number to indicate hardiness, but with the lowest temperature they can survive at, so a zonal map has never been widely used, as it is in America.

Not the answer you're looking for? Browse other questions tagged climate or ask your own question.

3
What Central or North American region is suitable to the most diverse variety of edible plants?
5
Is June too late to start growing vegetables in a northern/cold climate?
6
How to manage fruit-trees blooming for the second time in autumn?
6
How do you grow a plant not in your hardiness zone?
1
Kumquat fruit drop: Always the same result, no matter what
2
How hard or easy those Haworthias are to cultivate?
1
Calatheas & allies as houseplants without climate control
2
Global warming is real... My bulbs are dying
3
Understanding USDA Hardiness Zones and meaning of Frost Tender with respect of Zone 8