We moved into our new-build property in November 2018, and have been beset with garden (more specifically, lawn) issues since the start.

After badgering and persisting, our developer agreed to undertake a soil survey. They have just come back with the results, and they are currently “awaiting further internal comment” on how to proceed.

My take on that is that there has to be something to investigate, else the result would have been a clear-cut “it complies with NHBC and BS standards, you’re on your own”.

Can anyone interpret the report, pasted below - I have no real idea about what I’m looking at! 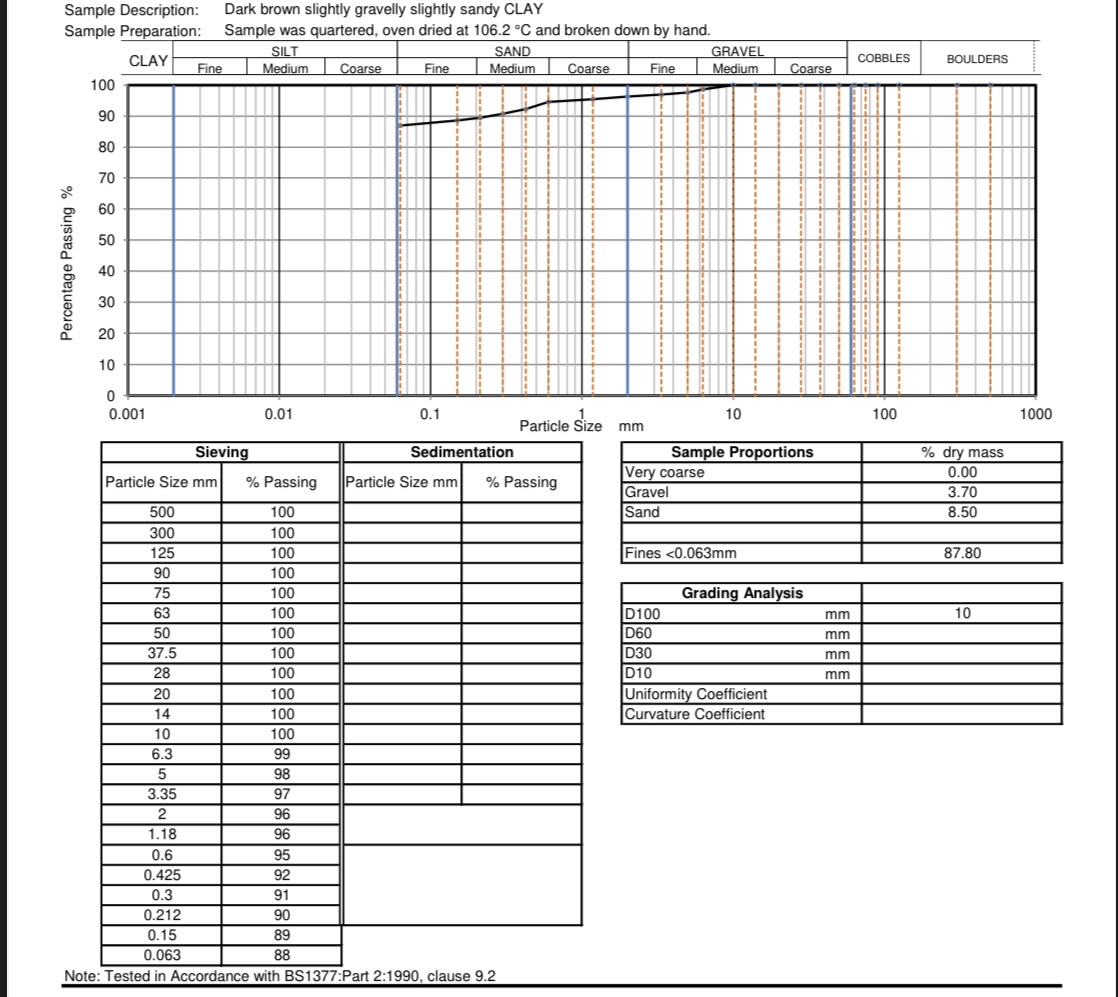 Was your contractor supposed to landscape the site with "good black dirt"? If so, he didn't. It looks like you've been given, at best, fill soil. It's predominantly clay (about 87% of the soil particles are "fine", which means they're very, very small. This indicates a clay soil), with the remainder being sand and gravel. The gravel could be left over from the building job if the contractor spread gravel for a temporary driveway or road and then skid-steered it into the soil when spreading the garbage soil that they dumped. Had the samples been taken near the property's borders, the gravel may not have been present.

It's also possible that your soil is actually sub-soil; it may simply be the "spoil" left over from digging the foundation, spread out after the job was finished.

Regardless of where the soil came from, it is not "good black dirt". If that's what your contract called for, the contractor didn't deliver on it. If you desire restitution (the proper soil delivered), I would recommend that you get your attorney to draw up the appropriate contract, and that the contract call for the contractor to remove at least six inches of this "soil" and replace it with at least six inches of sifted black dirt (this will typically remove weed roots but not weed seed). If you're supposed to have a lawn, that must be hydroseeded and covered with shredded straw (this is better than erosion mat unless you're on a hill).

Not the answer you're looking for? Browse other questions tagged lawn soil landscaping soil-test or ask your own question.

39
How do I work with soil that has a high clay content?
11
Where should I get my garden soil tested?
10
What are the best tools for testing soil?
7
How can you analyze if a land has good soil?
3
How to manage soil high in calcium and sulphur?
0
What is the average Haney Test composting results for a pile of wood chips?
1
What is my apple orchard soil type?
1
Can good soil turn bad?