Is it feasible to grow a thistle inside?

Is it feasible to grow/plant any species of thistle in a pot inside?

I've always found thistles beautiful, both the bulb, the flower and the spiky leaves. I've tried googling, but all results are about outdoor growing and control. Maybe I lack the right keywords as an amateur. 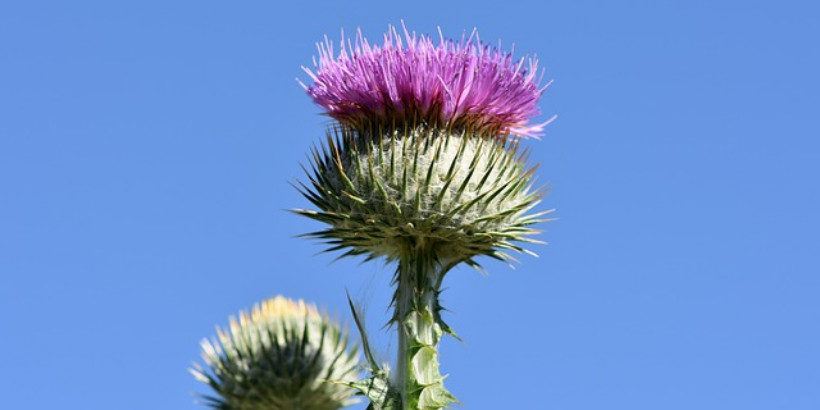 It is not easily done. The thistles I see usually grow in full sun which can be about 120,000 lux outside at noon. Inside illumination ranges from 100 to 500 lux, a vast difference in the light levels needed for growth and flowering. You would need to supplement the light levels with an artificial light system of some sort. High pressure sodium or metal halide are used by greenhouse growers.

The problem is by the time you finish installing a light system, running it for at least eight hours a day and paying for the electricity your home looks like a greenhouse.

I've sprouted Mary thistle indoors before, in my kitchen's south windowsill, but only to transplant it outside after it got to a few inches tall. That works fine. However, my observation and guess is you would probably want growlights to get a good, healthy plant with flowers. If you're just growing it for microgreens or something, then growing indoors is fine. Germination was pretty sporadic for me, though (they didn't all sprout at the same time). The leaves tasted like lettuce indoors or out, but they're more tender and less crinkly with low light such as is found in the shade or partial shade outdoors or in a bright windowsill.

Thistles do attract certain pests, including aphids, slugs, and weevils. I've never seen pests on them indoors, but I imagine they might be an issue. The weevils come when the buds/flowers come.

I wouldn't discourage you from attempting to grow a thistle indoors, though. You never know: my guess could be wrong. But yeah, give it as much light indoors as you can. If you're not using growlights, that means a south window, usually.

Not the answer you're looking for? Browse other questions tagged houseplants indoors plant-recommendations or ask your own question.

12
Why do two kalanchoes on one windowsill exhibit different growth habits?
14
How to prevent Sempervivum tectorum (Common Houseleek) from growing in length and not width?
4
Red, white and blue varieties for a medium pot in full sun
8
What plants can grow in bathroom humidity with no direct sunlight?
7
What soil mixture should I use for my office Schefflera?
5
Can I grow callisia repens turtle vine inside the house?
7
Can all plants grow inside all year round?
3
Is this pineapple dying?
0
Which soil works for Dracaena sanderiana (lucky bamboo)?