Plants to grow over and cover up an ugly wall?

On my property there is an ugly wall/fence, made of concrete, with vertical pieces of concrete and gaps between, like a picket fence. but far, far less attractive.

I want to plant some plants at the base of a fence that will cover it. I'm looking for fairly invasive plants that will grow enthusiastically all over the fence, and cover it with an evergreen green covering, ideally with flowers at some point.

The fence is old and serves no practical purpose, so it is not a problem to completely cover it. I do not however want anything that needs maintenance - nothing that needs cutting back every year, is hard to establish, etc - only that needs trimming back if it gets really out of control in size.

The soil at the base of the fence is small, about a foot front to back, with hard surfaces behind and in front, so I suspect the moisture levels are not enormous, though not too bad as the soil is deep.

I'm considering a simple ivy, combined with some evergreen clematis armandii, but is there a better option? The site is in London in the UK, so plenty of rain.

Invasive plants that will be easy to establish and grow enthusiastically all over the fence will need cutting back every year.

You might be better off compromising with something somewhat slower to establish and easier to maintain.

Something also to consider is dealing with the cuttings of an enthusiastically growing plant. Woody plants are more difficult to mulch. Something like a jasmine variety that grows rapidly but has a light growth that will easily mulch

I'm in London too, and although this year has been very wet, most years we're dry as dust by August, so water might be an issue in future years.

You haven't said which way the 'fence' faces - if it gets plenty of sun, consider Trachelospermum jasminoides - evergreen, fragrant white flowers in summer. Can be slow to get going, but spreads up to 33 feet once it has. This one's a twiner, and as such, will need a trellis or trellis fence section or three to twine around. Alternatively, wires strained between eyes which are inserted into the concrete for support, but this method usually means you have to do a bit of tying in.

Other than this and the clematis you mention, there are no other hardy flowering evergreen climbers suitable for the UK, unless you're prepared to use a free standing plant which prefers to grow against something, such as Garrya elliptica or Pyracantha. Both will need some training and pruning. Clematis 'Freckles' is supposed to be evergreen, but in my experience, is not a vigorous grower and sometimes does shed its leaves in winter. It will also get 'lost' in the ivy.

The problem you may experience is the arrangement of the 'fence' you have - although self clinging plants such as ivy will happily climb up the vertical concrete and cling well, there'll be nothing for it to cling to inbetween each upright. Other plants, such as the clematis you mention, are not self clinging unless they have a support to cling to, and in the case of clematis, this support usually needs to have thin struts, as in clematis mesh, so that the small petioles can twine around them. Anything thicker and they can't attach themselves. Therefore, depending which plants you choose, it may be necessary to erect another form of support over the existing fence to allow plants to climb or cling properly.

I'd also add that ivy, once it has clothed the area, will need maintenance in the form of cutting back twice a year, usually around May and again September, to keep it flat to the support, at which time any extra root growth or runners at the base heading away from the fence, over the hard surface at the bottom and into the garden should also be removed. The necessity for trimming in later years is much more difficult if you have Clematis armandii growing in and amongst the ivy, obviously - this one should only be cut immediately after flowering. If, on the other hand, you decide not to cut back the ivy, you will very likely not notice the Clematis amongst the unmanaged ivy growth.

Of all the choices available, I'd be inclined to go for pyracantha and train it if the area's fairly sunny, Garrya elliptica if not. That way, you won't need to provide extra supports, but obviously, the choice is yours.

I have used cotoneaster with great success for covering fences and walls that have gaps. I live in central Scotland, so I would guess you could get better growth in London. 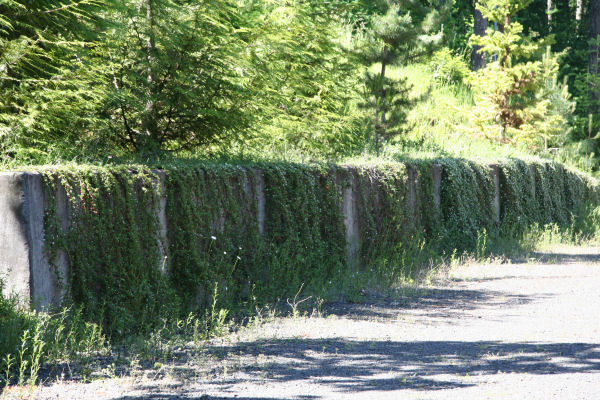 Some years ago I lived in Somerset; in the back garden was a new, but ugly fence about 4 feet high. I didn't want to remove the fence but wanted to soften it, or even hide it.
There was a border about 30 inches deep between the fence and the lawn.

I planted several cotoneaster horizontalis about six feet apart and about one foot away from the bottom of the fence. Over the next few years, the branches spread out, leaning against the fence and began to cover the face of the fence with that lovely herringbone growth. The leaves turned red in autumn.
Sorry I don't have a photograph; I moved away after a few more years.

I did manage to get some pruned branches to root and provide new plants, as I recall.

Low maintenance, attractive, and a great cover. If I had to cover a wall or fence again, I would do exactly the same again.

4
Does an Eastern Redbud tolerate partial shade?
5
What are some recommended perennials to grow under large spruce trees in an area of about 350 sq. feet?
4
Recommendations for plants next to front walkway
4
Filling gaps between alliums
2
How close can I plant a new climbing rose to an existing mature plant?
6
Ideas needed to sort out this waterlogged, dark, mess in front of my house
6
Self-clinging climber that will not damage a concrete fence
6
How to reclaim my backyard that has turned into a swamp?
1
Planting to obscure a tree stump