Keeping aphids away from my Chamomile once they've found it 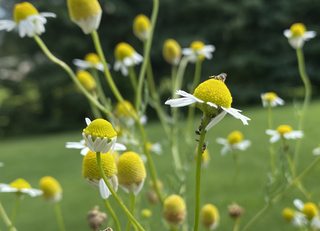 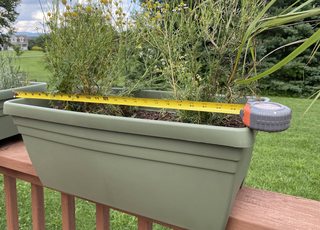 I've had good success with the Chamomile I planted in a 2 foot long windowbox and I had no pest issues before we started getting a lot of rain. I was treating them with neem oil diluted in water (1 ounce per gallon as recommended by the package, which is 70% neem oil) using a powered sprayer to coat the leaves of all my container plants. I think it is getting washed away with the rain. Now my plants have bunches of what I assume are aphids on the stem right underneath the flower.

I did enjoy the lady bugs that were attracted by the aphids. The ants not so much. I would prefer them gone. Applying the neem oil now that they're established doesn't seem to help - maybe I am not using a strong enough concentration? The plants seem healthy otherwise, so I suppose I could work around them and just try to harvest the flowers before they find them.

I'd rather not use anything toxic - they're in a container and I was using them for tea. They are in a box on the rail of a second story deck, so I could try some sort of barrier, but I need to get rid of the ones that are there currently. Would more frequent or stronger applications of neem oil be effective? Should I just prune any stem with aphids?

The containers this year are things we're trying out for when we pull out the ugly bushes that came with the house and replace them with raised beds next year. I have never been able to plant Chamomile without them being covered in ants, so I was excited that they were pest free for a couple months. If you have a recommendation that would work if we put them into a bed instead of keeping them in a container, I would be interested in that too.

Browse other questions tagged or ask your own question.

11
Ants and aphids - which should I fight first
2
What are some good organic repellents to keep squirrels away from fruit on trees?
8
How to control onion aphids in aquaponics?
3
How do I fight off an aphid invasion on indoor peppers?
6
Can Nicotiana alata be used as an aphid "honeypot"?
4
Best method of using lady bugs to prevent aphids
3
Why would my goji berry plant in California get sick and full of aphids?
4
Baby apple tree under attack by...aphids? What to do?
1
Are these aphids that I've found in my indoor greenhouse and trying to figure out what this caterpillar like creature is?
3
Will rubbing alcohol make my basil inedible?