Big Max pumpkin leaves shrivel/go limp in hot afternoon, even with frequent waterings; how to stop this?

I have a Big Max pumpkin plant that sprouted in late June and has since taken off, with a lot of leaves, flowers, and pumpkin buds. I have been fertilizing it fairly often with a pretty balanced fertilizer (little less N than P or K, I don't remember the exact ratio).

I live in central New Mexico. This plant did fine with the hot temperatures in early July, then we had two weeks of cooler temperatures with the monsoon, and now that highs are in the 90's (Fahrenheit) again, starting around 11 am the leaves get limp and shriveled as seen in the picture below. It starts with the leaves at the end of the main vine, then leaves at the ends of the other vines, then the central leaves get a little droopy too.

With the leaves behaving this way, I now water in the morning, at noon, and in the evening. The leaves return to normal in the evening and are normal throughout the night through the next morning.

With how many pumpkin buds and flowers my plant is producing (way more than I want; I pruned things a couple of days ago), and how large it has grown, I have very recently switched to a 0-10-10 fertilizer.

What can I do for my plant to keep the leaves from getting so droopy and limp in the afternoon? The dirt around it is always at least slightly muddy with the watering schedule I give it. I notice no difference in the leaves after the noon watering. Is the plan just too large for the roots? Should I prune some of the vines? 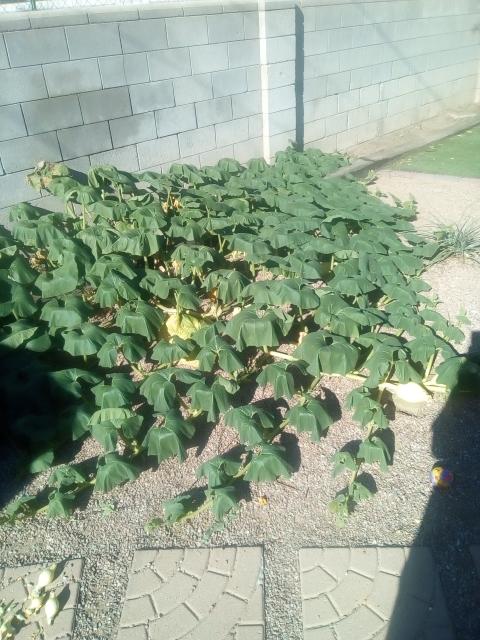 Wilting can be caused by either too little or too much water. In this case though, your Big Max plant seems to be distressed mostly from the midday heat, judging from the wilting cycle and its unresponsiveness to watering. The stone surface it is climbing over will get very hot in the midday sun and exacerbate the wilting. I've seen the same wilting of my squash plants where I live in central NY, and though I used to get worried about them, they always perk up and do fine again when the heat of the day has passed.

Here's a thread with some ideas about how to treat the (ugly but probably harmless) problem of wilting due to heat: https://davesgarden.com/community/forums/t/898451/ People suggest lightly shading the plant in some way, such as with a light spray of water with kaolin clay powder. Lightweight cloth such as row cover fabric could also be used (this should be suspended above the plant, not directly lying on the plant). The plant still needs sun, but a little less sun than what it's currently getting at midday would probably be easier on it.

The wilting is likely due to the fact the plant is trailing over a hard surface rather than lack of water at the root; hard surfacing not only gets hot,but holds the heat, and a pale surface will reflect sunlight and heat too. It sounds like you are watering enough, its just the hard surfaces causing the problem.

Rigging up some sort of shade for the afternoons will help stop the wilting, but it looks as if the plant is still coping anyway even without shading - none of the leaves are shrivelled/crispy and, as you say, it recovers overnight on its own.

I was searching for this behavior on internet; its a kind of thermonastic (or photonastic) movement. I believe its a natural defense from too much direct sun (avoiding overheat). I noticed that on cloudy days plants didnt show this behavior; so on sunny days I placed a tarp to slightly shadow them and they didn't limp! My plants are doing this movements almost every day for a month and there is no wilting look. 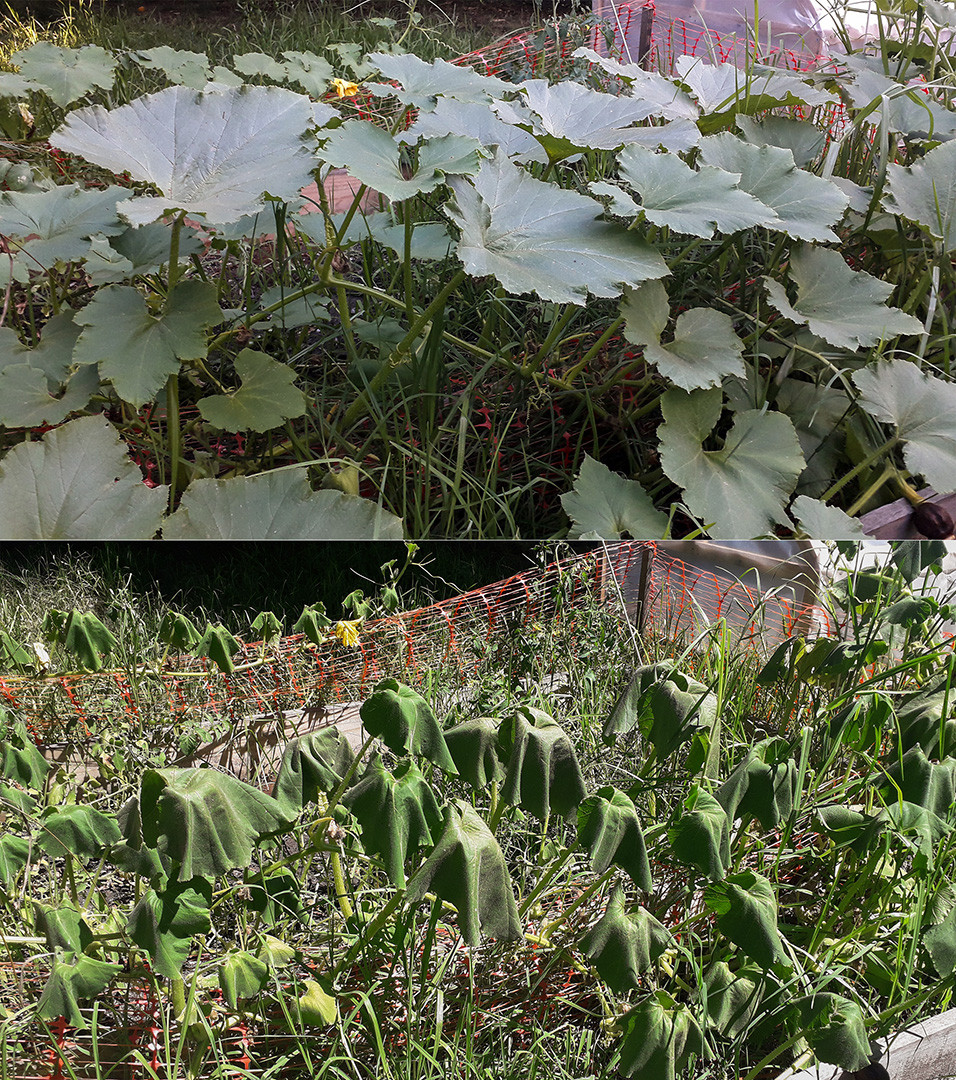 I couldn't find a paper about this specific issue.

Not the answer you're looking for? Browse other questions tagged watering pumpkins hot-weather or ask your own question.

3
Dealing with Hydrangea with dark green flower tips and wilting leaves
4
Pumpkins survive and continue to produce but fruit went rotten after some development
4
Why has 20% of my pumpkin plant suddenly died and how can I save it?
1
My olive tree's leaves have dried out but bottom of trunk is sprouting. What should I do?
1
Moldy rubber tree plant
4
How long after "days to harvest" time frame will pumpkins still be good?
1
Pumpkin seedlings dying off?
1
Need help identifying this flower (male/female) on a Big Max pumpkin; also, why is it growing flowers already?
1
(NW Indiana) Yellow pumpkin stems and leaves