I own a large, glorious Monkey Puzzle Tree (Araucaria araucana) that overhangs my driveway, the driveway of my neighbour and the public footpath. It's a female tree, roughly 50 feet high perhaps and we think it may be around 70-80 years old.

In recent years it has increased its habit of dropping thousands of seeds (every day) during the hottest days of summer. It's getting so bad that the sharp, pointed seeds are posing a danger to car tyres and pedestrians' feet, so I'm having to go out with a broom and a snow shovel to sweep up these evil things multiple times a day!

Here's what we're looking at (with clothes peg for scale): 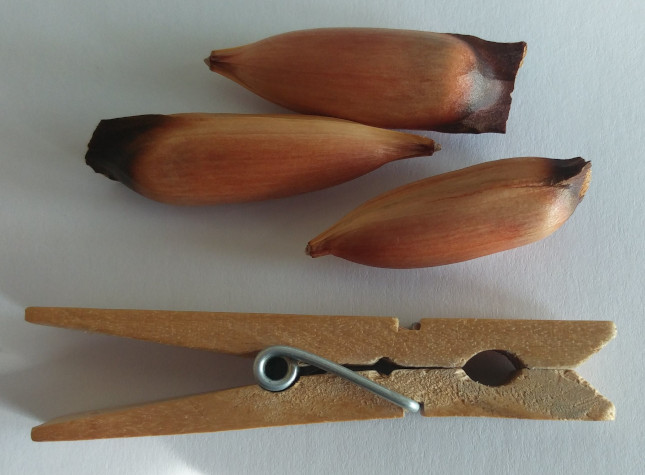 The tree is surrounded by concrete, gravel and grass, which I'd like to ideally keep clear of the seeds. I've tried to pick these things up with an old, cheap garden vacuum, but that is even harder than sweeping them.

An illustration of the area and the places where the seeds tend to accumulate (yellow line is my neighbour's fence)... 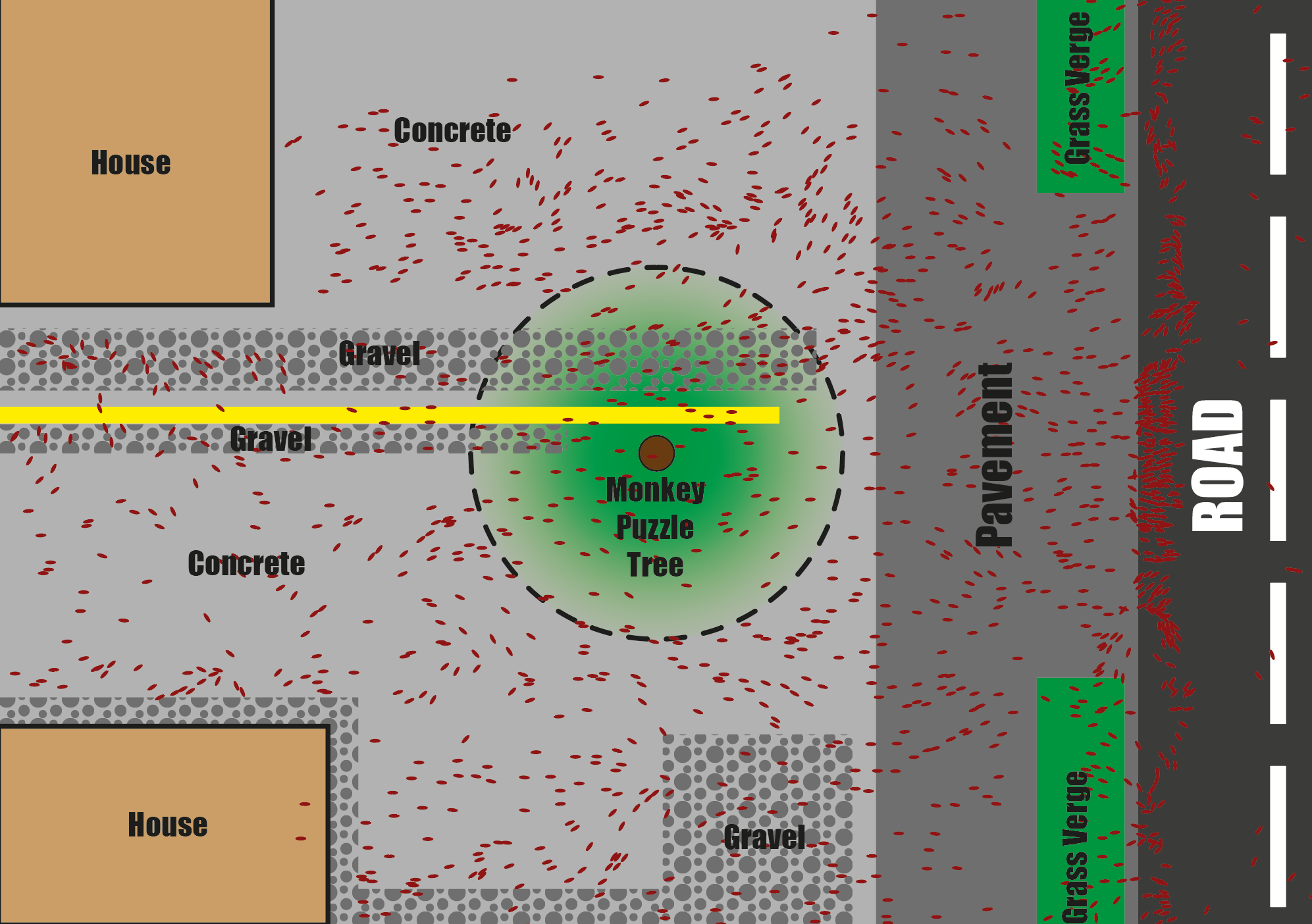 They get blown into the roadside gutter which poses a risk for local residents parking at the front of the houses, and also might eventually cause the drains to clog up. It's my tree so I am on the hook for any repair bills from the public or the local council maintenance dept.

Can anyone recommend a method for picking up these things quickly and easily? I'm thinking that someone that has to maintain a large estate with dozens of these trees probably has some clever ideas I've not thought of. Is there some kind of gadget designed for picking up things like this without also picking up gravel?

p.s. I normally separate out the viable seeds from the dead ones and give the good ones away for other people to grow in their gardens. It's an endangered species and I'd like to help it out as much as I can.

They do make lawn sweepers and powered lawn vacuums, but they're not that cheap. Google search "garden vacuum" and see what's out there. If possible, see if you can rent one from a tool rental business so you can see how they perform.

I don't have experience with these seeds, I even never have seen such a beautiful tree here in the Netherlands. But I think a leaf blower can help. Or do you think the seeds are too heavy for a leaf blower. I think that would be the easiest solution, better than sweeping it with a broom every day.

Probably not what you want to hear, but why not just ignore the seeds? Why make a rod for your own back by assuming responsibility for clearing the things up? It's just a fact of life that trees can be a nuisance. They shed fruit and seeds, drop leaves, have problem flowers, lose the occasional branch, some are even poisonous. If we only permitted trees that were 100% nuisance free, there wouldn't be any trees. As for your particular seeds. Most people don't walk around outside barefoot in the UK, and if they do, it's their lookout if they get hurt. If there's a spate of punctured tyres due to your seeds, or if the local council start complaining, you might have to think about clearing the things up. Otherwise, just enjoy having such a wonderful tree in your garden :-)

Not the answer you're looking for? Browse other questions tagged trees seeds pines or ask your own question.

3
Which high-desert-friendly tree should I plant beside my driveway?
2
What do I need to do to turn a branch into a tree?
12
Can I grow a cherry tree from seed without stratification?
5
Should I prune this new olive tree?
4
Can I grow lemon cucumbers in my area, Southeast VA, zone8? Pic incl'd
4
Why are seeds of summer chrysanthemum different between suppliers?
2
Starting seeds in the ground during summer
1
What are hazards of cold weather and frost to tree seeds and seedlings in northern nursery?
1
What kind of pine is this?