What is damaging my tree Aloe?

I've had a Aloe plant for many years, mostly indoors. I finally repotted it a couple of months ago and split most of the pups off. All of the plants seem to have some sort of disease since then, possibly initated by minor overwatering whilst trying to get the pups to establish roots.

The symptoms are reddening of the tips, black spots, weird brown spots, and leisons on the underside of leaves.

I've attached a couple of examples of leaves I've just pruned off the mother plant. 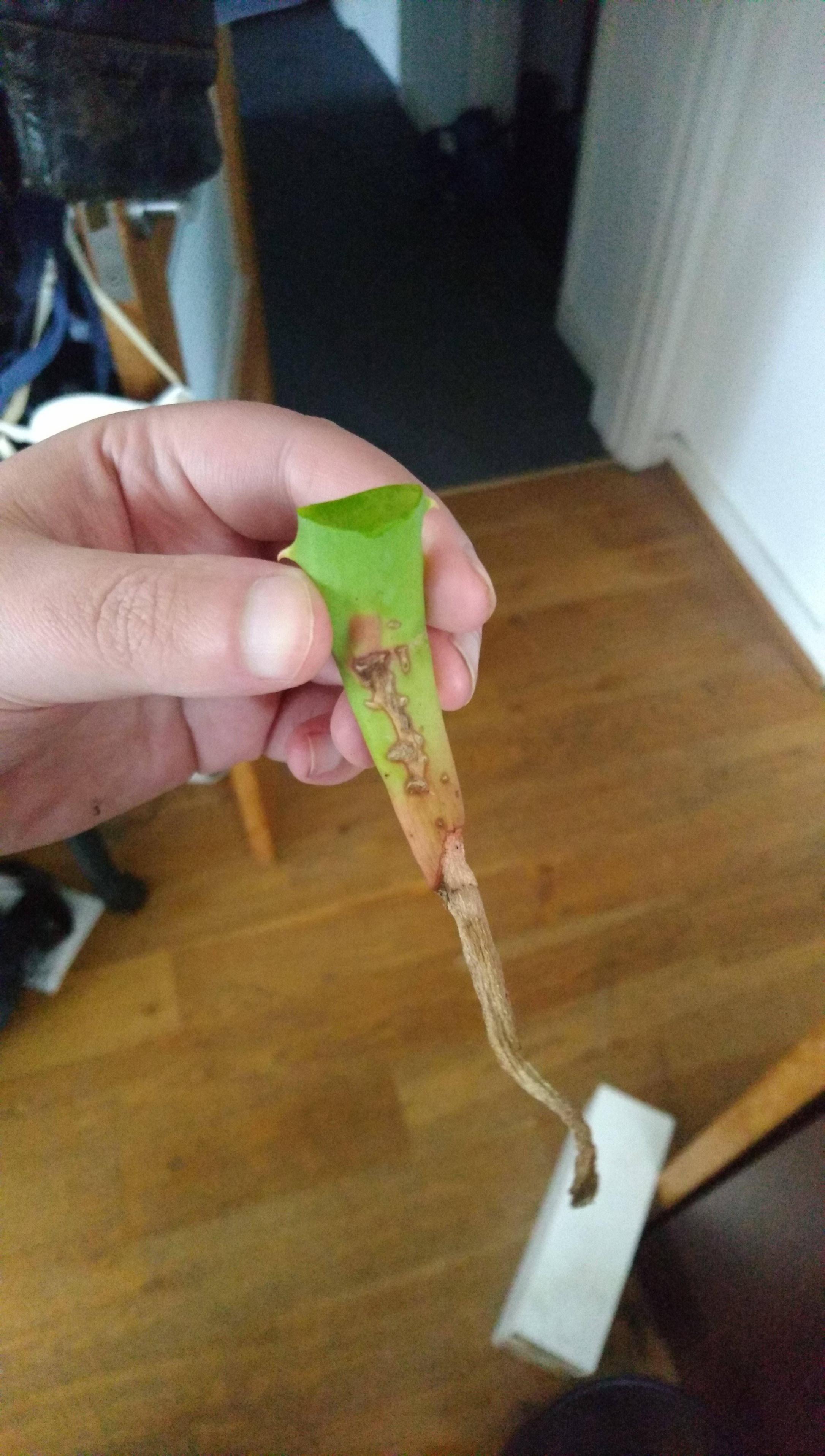 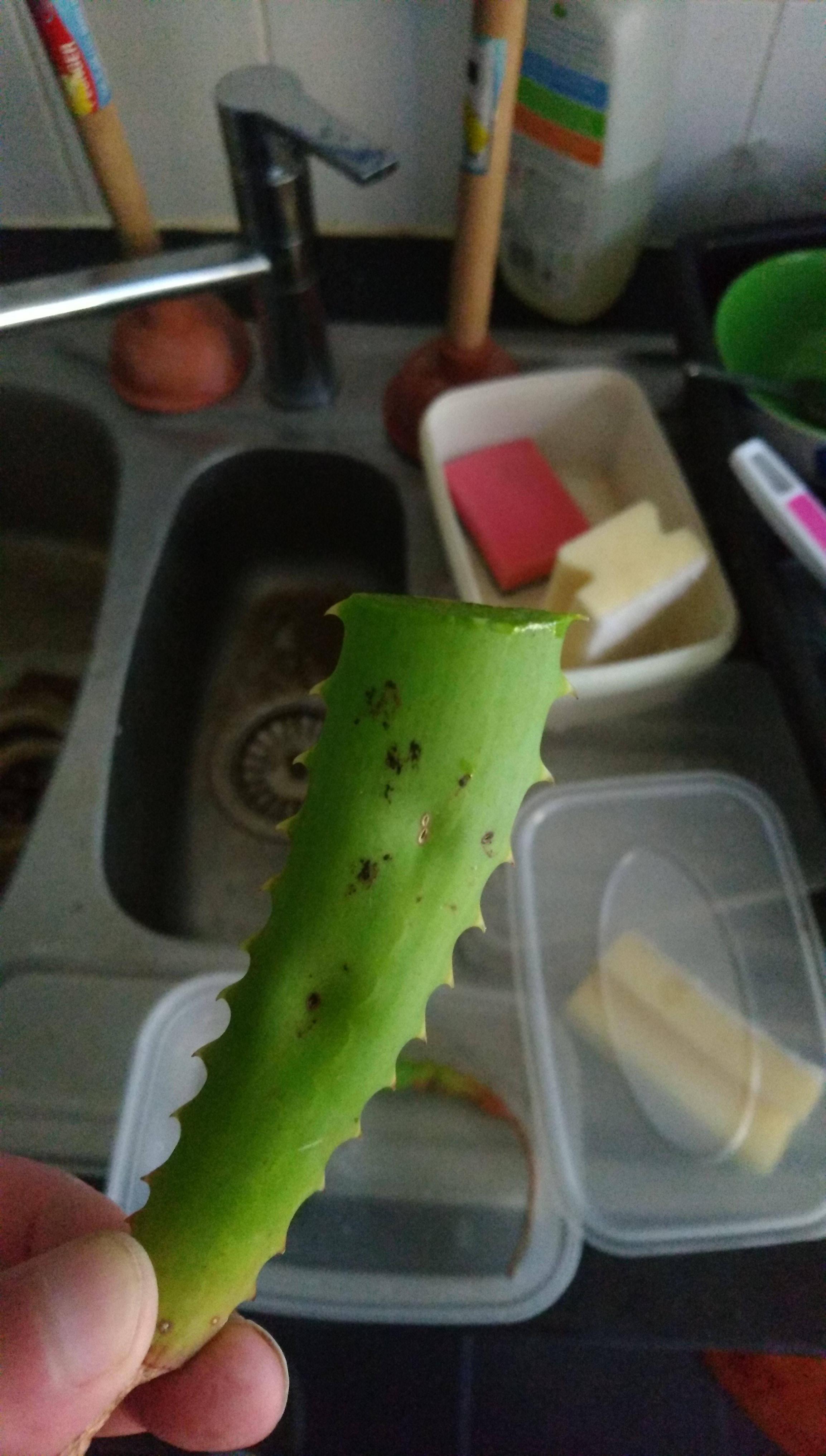 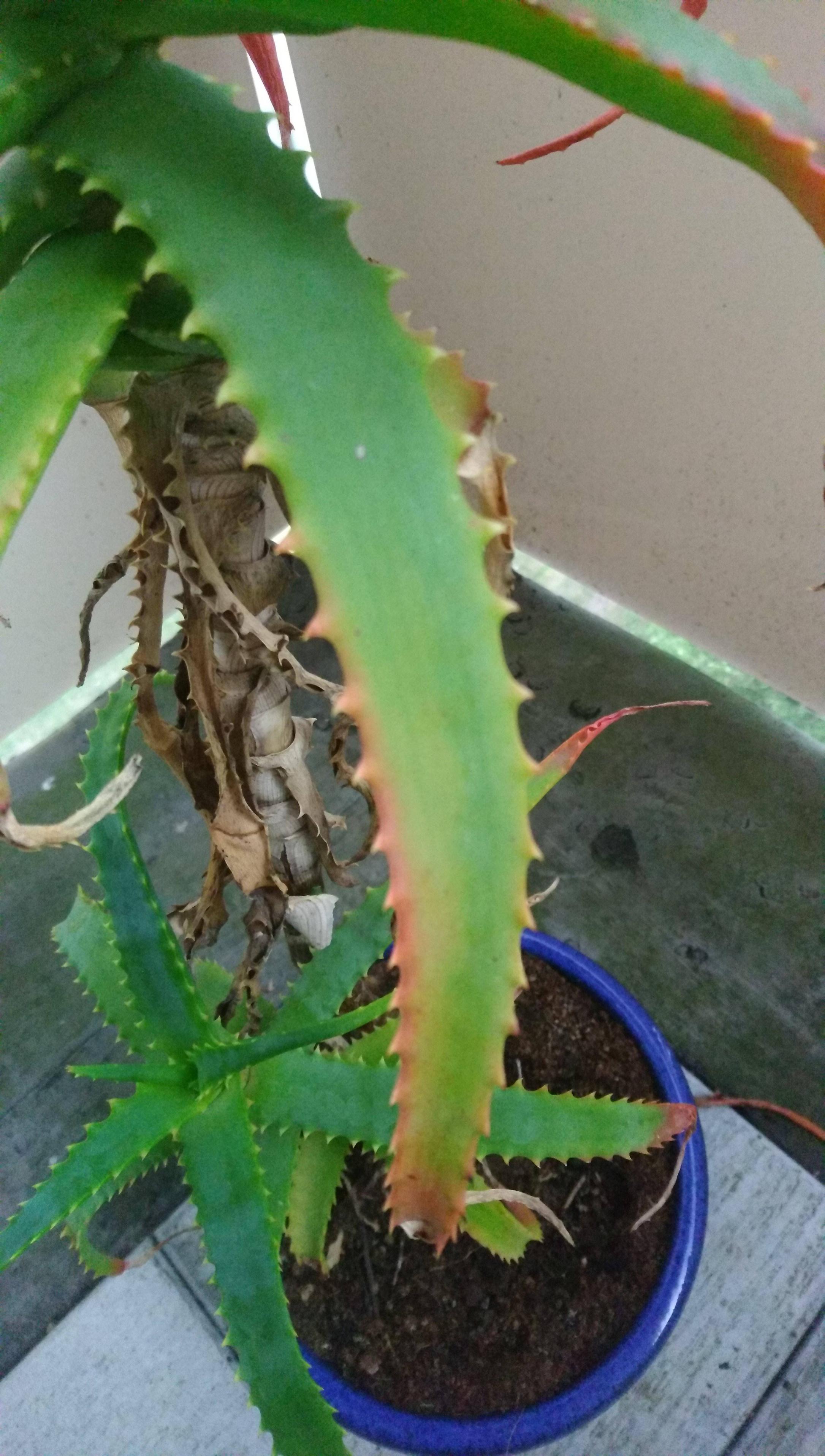 Edit: I can confirm the former pot was glazed, new pots are a mix of glazed, terracotta and plastic. Soil is loose store-bought multipurpose compost (there was nothing but solid roots in the old pot as it was so overdue a re-pot), and shards of the old pot (had to smash it to got the plant out!) were placed in the bottom of the new ones to assist drainage. All pots have drainage holes so water can't build up.

I initially was watering them with a tiny amount of water daily, and I quickly backed this off to a tiny amount a couple of times a week until they seemed established and I saw new growth. I now only water them when the soil feels excessively dry, which naturally varies by the weather. The mother is outside, and we've had a few heavy wet spells of late. I'm confident the drainage is sufficient to keep her happy and dry though.

My concern about the black spots is that they seem to progress to brown holes, which given I can't see any parasites, I suspect to be something fungal and/or bacterial. I don't know how to treat that if so, hence my post. These plants are descendants of the originals my deceased granddad grew in his old garden, and my mother grew in our old home, so I don't want to let anything take hold that becomes untreatable!

You may be correct regarding the rainy conditions, and additional moisture. And the condition could be being caused by more than one factor; eg, sometimes very slight pressure on a tip can affect the tissue, and your Aloe could also be withdrawing energy to use for new growth stimulated by and required by the replanting.

Possibly the container could have something in it or on it; also, if the original container was unglazed, the glazing could be affecting the lateral moisture holding of the soil, which is something that would tend to become noticeable in the time frame described(depends on configuation of original container), or simply from a difference in porosity of the container. The soil is inferred to be the same as original, and also that there's some coarse gravel etc in the bottom and a hole(s) in the bottom to assist drainage.

The small dark features could be from several things, including the moisture or replanting, and even though the dark features aren't widespread, would suggest keeping close observation of them. Any sort of added nutrient could also be affecting your Aloe in this period of reestablishment, so maybe be very careful of that.

**Addendum: The fact they have all been planted carefully is very good: if the soil is about the same as before then that's good too. However, the compost used to replant them may be much more nutrient rich than the previous soil, which results in the same effect as adding too much of a separate nutrient; Also, since there is comparatively much more soil following the replanting, there is also much more moisture retention. Compared to the previous soil(rootbound etc) it may be a large increase in nutrient and large increase in moisture retention, and especially so for the richer compost used. So, maybe consider carefully redoing the planting of your Aloes, especially the oldest one, in a soil blend of the compost mentioned and mostly a soil less rich, or in an entirely less rich soil. Also, would suggest some coarse gravel in the bottom, in addition to the pottery shards over the bottom: otherwise, the soil may be clumpier on the bottom, resulting in localised sogginess & less aereation. Currently, your Aloes may be too wet, and may also be receiving too much nutrient!

The wet weather conditions mentioned could be contributing to the spots on the oldest Aloe; maybe if rainy try bring it in where it won't be drizzly wet, or keep it indoors in the location where it previously flourished. The oldest Aloe sounds like it has been too wet & humid for too long, especially with the increased amount of soil, and the richness & water retaining properties of the new soil. The new compost soil may contain too much nutrient, especially for transplants, which has about the same effect as overaddition of nutrient, and the new soils balnce of nutrients may be poor for your Aloes. The new soil well may be staying wet longer, and isn't draining as quickly or as completely as did the previous soil, and also staying wet longer because there's relatively more soil. And there may be significantly reduced aereation if there isn't some coarse gravel on the bottom in addition to the pottery shards.

If have a sunlit location where the temperature isn't too cool, dehumidified/ lower humidity air might be good, and an inexpensive thermometer/hygrometer placed adjacent to & level with the oldest Aloe could be helpful in monitoring both the temperature and humidity environment of the Aloe. Checking the acidity & other properties of the soil might be useful, since the new compost's acidity/ nutrient ratios could be detrimental to, or suboptimal for your Aloes. Also, maybe keep one or two of the new Aloes separate from the others, and good to keep close observation on all of them.

The new growth looks healthy and robust, so hopefully your excellent & historied Aloes will continue to flourish!

The problem here is overwatering. Aloe is a succulent plant, which means it can cope very well with drought. By keeping the soil wet for too long the roots will rot and you'll get red leaves and brown tips.

The best advice is to have a pot and soil with good drainage. Try to let the soil dry out between watering, if not sure feel finger deep. By doubt don't water it.

I'm going to say your soil is too rich. If you have actually potted it in straight compost it is far too rich and probably doesn't drain adequately. I recommend getting some cactus/succulent soil and starting over.

Not the answer you're looking for? Browse other questions tagged diagnosis diseases aloe or ask your own question.

2
Is my aloe dead?
7
Why is the foliage turning yellow on this climbing indoor vine?
12
Can I cut the top off a drooping aloe plant?
5
Why are the leaves on my peach tree sapling wilting and dropping off?
6
Dark spots on dieffenbachia leaves
4
Why are my Monstera's leaves turning brown and drooping?
2
ZZ plant has light spot on the leaves