Planting to obscure a tree stump

We had a tree removed from a corner of our garden a couple of years back, but now we want to green up the space so we're not looking at ugly stump and ugly fence. It was in an awkward position where they couldn't really get a stump-grinder to it, so its probably 3-4 inches tall and about 12 inches diameter.

Any recomendations for frost-tollerant, drought-resistant (gotta love that Aussie climate) shrubs/bushes that might be happy to grow around the stump to cover up the ugly? Bonus points if it'll stop the dogs/kids from being able to eat mushrooms from the stump.

Here's one idea for you. Years ago, a previous owner of my house cut down a large silver maple, which left a stump approximately 30cm high and 65cm across. His solution for hiding the stump was to dump a load of cobbles on top of it. (he also had a pond dug next to the stump and hid the pump between two of the root flares under the rock). The cobbles are of mixed shapes and average about 15-25cm in diameter/max length. Here's a photo: 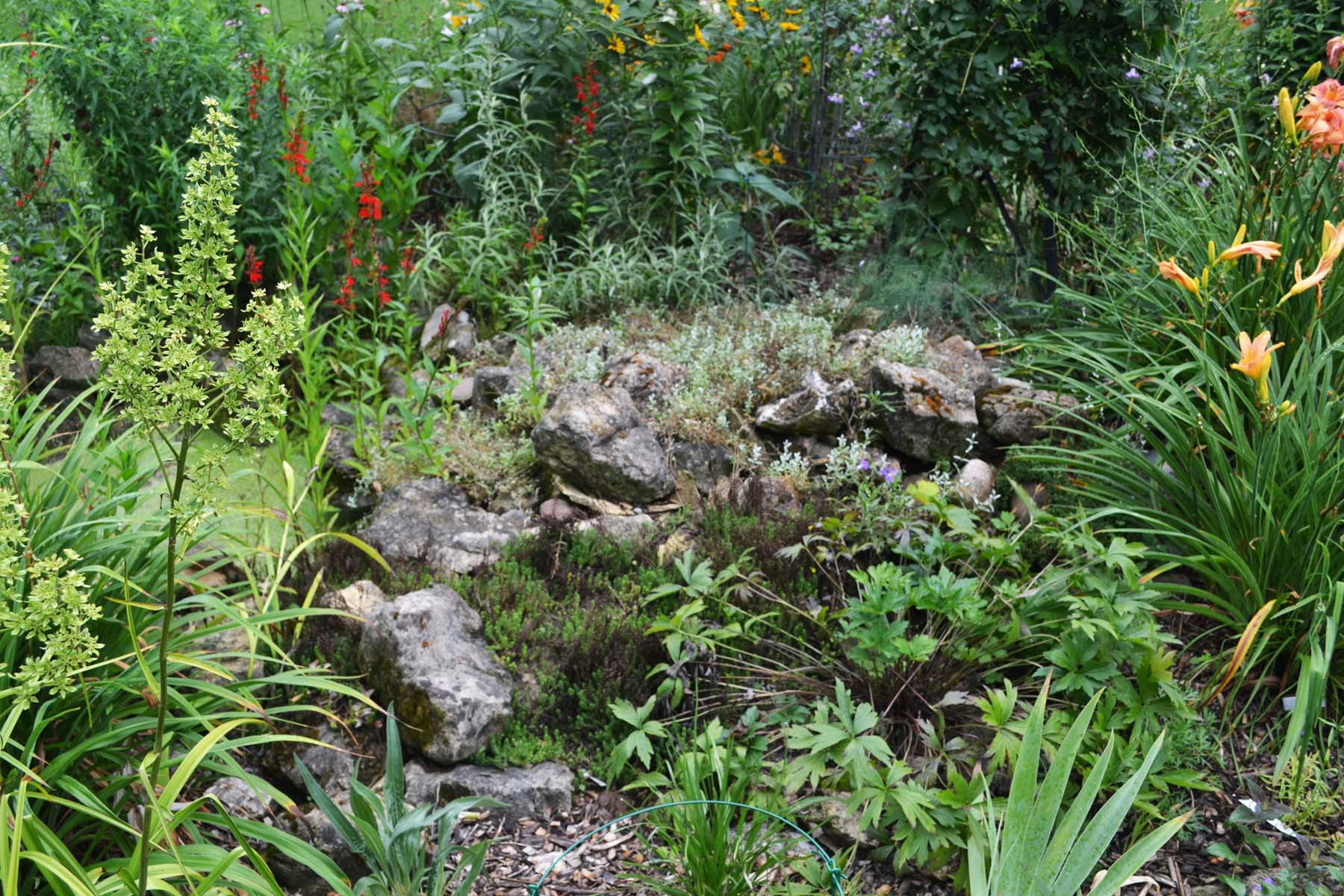 I added soil between some of the cobbles and planted several ground covers: Snow-in-summer(Cerastium tomentosum), a sedum identified as Sedum crassula (although I doubt that ID), and a creeping phlox (Phlox subulata). This gives me a bloom season of April - early July, after which it looks a bit ratty for a month until the Cerastium comes back. I could add a New York Aster if I wanted to have color later in the summer, but that's a bit too tall for my taste.

Now, I doubt that these plants will all work in your climate, but I'm sure that you can find succulents native to your area - or to a similar South African climate - that will work for you. The advantages of using rock here are that it's a permanent solution (and will prevent your children from eating mushrooms), it's pretty inexpensive, and with the proper choice of plants, it's maintenance-free.

Not the answer you're looking for? Browse other questions tagged plant-recommendations shrubs stump-removal or ask your own question.

32
How efficient are stump removal chemicals?
12
Options for an edible privacy “fence”?
21
Should I burn out my tree stumps?
5
How to get rid of sprouts coming from a chinaberry stump?
10
What should I do after a tree removal and stump grinding to prepare for grass?
6
How do I get ready for a stump grinding, and how long afterwards should I wait to replant?
5
What will speed the decomposition of a tree stump?
6
What Would Be A Good Shade Tree for Oakville, Ontario, Canada?
2
Do I need to treat a Eucalyptus stump to prevent regrowth?
4
Multiple hedge planting