Ants and white/gray/brown spores all over my gardenia 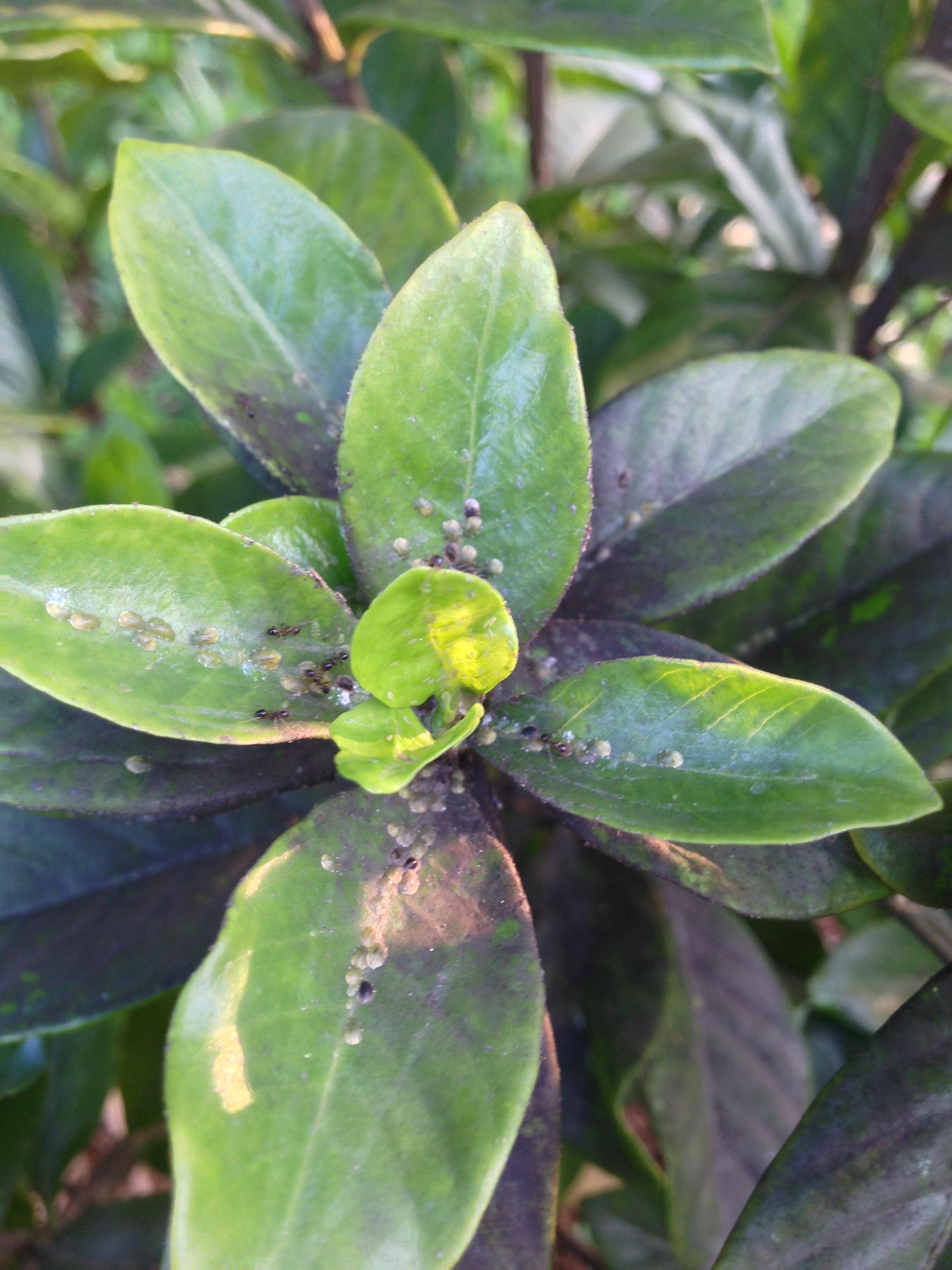 I planted my gardenia four or five months ago.

I noticed, recently, that (a) growth has stunted, and (b) there are ants all over the plant (base, leaves, etc.).

There are also white little dots (spores?) on some of the leaves.

To help with the stunted growth, I've started fertilizing with a more-acidic fertilizer as opposed to the more general-use plant food I had been using.

So, a couple questions wrapped together:

Mealybug are whitish and have a white fluff around them. Scale is hard, semi spherical and brown to black. Scale and aphids both secret a sugar that ants harvest. You haven't seen a real scale infestation until you walk under an indoor tree and notice that your shoes stick to the carpet.

In the picture above the oldest adults are dark brown and the youngsters are light brown. They move out up and down the leaf vein where the flow of sap is the strongest.

Scale are difficult to eradicate as the hard shell protects them from soap and water. However a soft tooth brush dipped in soap and water would be effective in removing the adults. Use the toothbrush once and then wipe the leaves and stems, top and bottom, with a cloth or paper towel soaked in soap and water at five to seven day intervals to catch the eggs and stragglers.

High nitrogen levels will attract scale but the most likely source is that they came with the plant from the grower. If the grower only had them under control and not eradicated the scale will return as they can hide in the axils of the leaves.

Thanks to GradyPlayer for pointing out that the two are related. Even with their different lifestyles they are both hard to control on houseplants. As a former licensed pesticide applicator I found that if soap and water doesn't remove them then pyrethrums, neem oil or registered pesticides are not 100% guaranteed either. It's not what you use, it's the coverage. Can you get your choice of control agent to cover the entire surface of the plant and can you get the same coverage when you repeat the treatment at five to seven day intervals?

It's probably mealybugs, being farmed by the ants. Like aphids, the mealybugs suck the juices on the new growth and cause deformity and discoloration. Spray with white oil or garlic infused water over several days/weeks. Over-fertilizing can cause soft growth that bugs opportune. A drench with a diluted seaweed solution helps strengthen cells.

I have had great luck with scale using a dormant oil spray. It essentially coats the shell of the insects and suffocates them. You can also simply spray the plant with a high pressure spray from a garden hose.

I have hard shelled brown scales on my gardenia. I simply scraped them off and sprayed the plant with neem oil. I live in Ohio and I over wintered the plant in the basement using plant lights. When I brought it outside I noticed the ants and brown scales on the plant. Some branches turned black but still have a leaf or two on the ends. I'm hoping fresh air and sunlight will make it healthy again. I used organic acid fertilizer to help stimulate growth. Also, gardenias love coffee grounds.

Not the answer you're looking for? Browse other questions tagged diagnosis pest-control gardenias or ask your own question.

6
What grows/flowers like trumpet vine, but isn't?
3
What are these round, white, waxy things on my cycad?
2
Why is my gardenia covered with flies, ants, and other insects?
2
Identify deciduous shrub with small red berries and small leaves

17
Japanese box hedge failing to thrive. What to do?
5
What is causing white spots and wilting on my Black Naga leaves?
3
What would cause pale patches and little brown spots on my Lemon Balm leaves?
7
Why are there small white organisms spreading to all of my indoor ferns leaves?
3
Is this pest? Please help me get rid of it
1
Black spots with white ring around them on Zinnia leaves