I bought a marigold plant two weeks ago and it started by a beautiful bloom. However, some of the biggest flower slowly becomes brown and wilted. The leaves are curling and dried too. So I cut out the dried part.

I am not sure if it's due to overwatering, underwatering, or fungus? The other buds are okay and seems to bloom just fine. It's just quite many leaves and small branches are drying, it makes me worry. The stem is not mushy, though.

I live in Southeast Asia, which has a tropical climate and sun all year round. The plant was placed in west-facing balcony, so it receives a full sun from 1pm to 5pm. Water it once a day except during rain, so the soil is pretty moist but not flooded. I thought Marigold likes sun, because the seller put it on the open space instead of in the shade and they were fine and healthy when i bought it. I haven't changed the potting mix ever since I bought it.

Some people suggested to cut the flower, but I still left it because I wanted to get the seed out of it. But I am not sure if I can have it, looking at the flower condition.

Here is the picture: 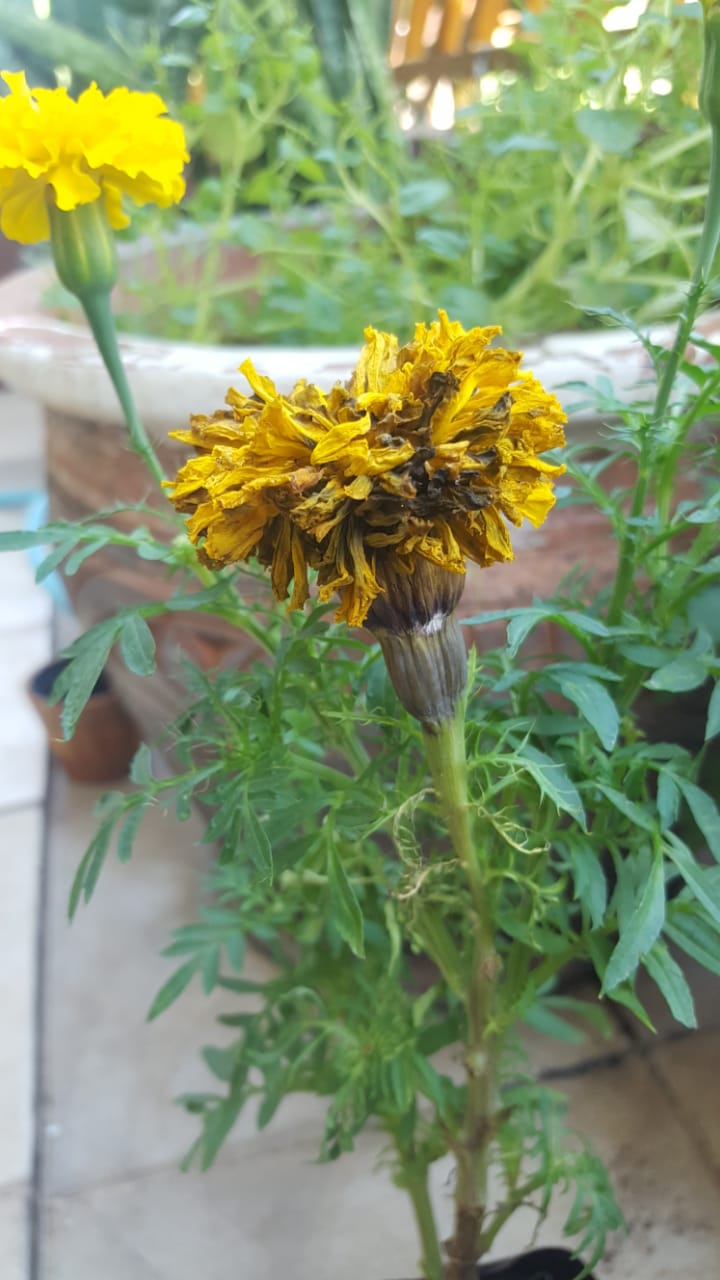 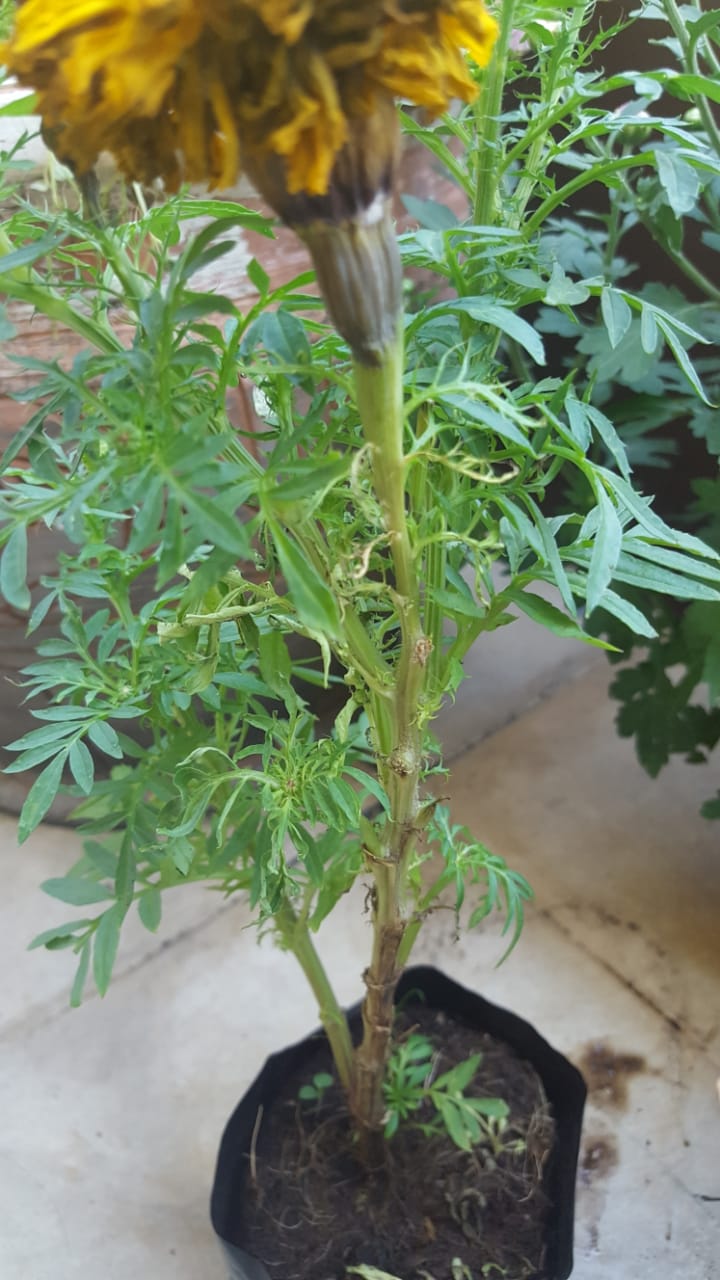 The last time I picked the wilted flower, the seeds are underdeveloped. Could it be because no pollination was going on? There was also a fuzzy white spot (small one) which I am afraid is kind of fungus.

Anyone can give me suggestion on what's going on with it and what to do to make it healthy again?

Remove the spent flower by clipping it off just above the nearest healthy leaf. It looks almost as if its been exposed to quite a lot of rain, which will often cause this browned, soggy look to this type of marigold flower. When you water, just water the soil in the pot, keep the water off the flowers.

Your marigold is Tagetes erecta,common name African marigold - these can get up to 120 cm in height and should be quite big, bushy plants. One of the problems your plant/s have is the size of pot they're in - they need to be in bigger pots with more soil available for their roots, so find some larger containers with drainage holes and move them, carefully, packing more potting soil around the root balls in the new pots. Afterwards, water in well, allowing excess water to drain away freely. Ongoing, you may need to water a bit more often, but you can check by feeling the top of the soil with your finger, and if it feels just about dry, water thoroughly - you need not worry about overwatering so long as any excess water is able to drain away readily from the bottom of the pot. Full sun is usually recommended for these in places like the UK, but where you are I assume you have higher temperatures and hotter sun, so half a day's sun is fine. Further info on these plants here https://www.rhs.org.uk/Plants/151627/Tagetes-erecta/Details

One other thing - you have used the 'houseplant' tag, but these plants do not do very well as houseplants.

Not the answer you're looking for? Browse other questions tagged plant-health flowers tropical or ask your own question.

2
flower suggestion for outside the window
3
Red Cordyline (Ti Plant) Curling Leaves, Spotted & browing- issue?
5
What is this plant that has light trumpet-shaped flowers and smells great?
5
Why are my snack peppers wilting?
3
Chrysanthemum flowers and buds turning brown and dying, leaves wilting and getting brown spots
2
How to take care of White Sandalwood Plant in the Pot?
2
Chrysanthemum blooms partially deformed and colors faded
5
Is this tree dead or dying?
1
Is my kalanchoe dying?