I have had this Magnolia soulangeana 'Heaven Scent' for 2 years (I live in South East England). It is in a cubic pot (of side length ~50cm) on the patio and is currently 135cm tall.

It did very well in its first year and it also bloomed well in early spring this year. It seems to have grown significantly since last year.

However, the leaves have now just started to brown and curl (see 5 photos below), which seems surprising in early July. Also (possibly related?), something has eaten some of the lower leaves (see image 4).

What could be causing these problems? 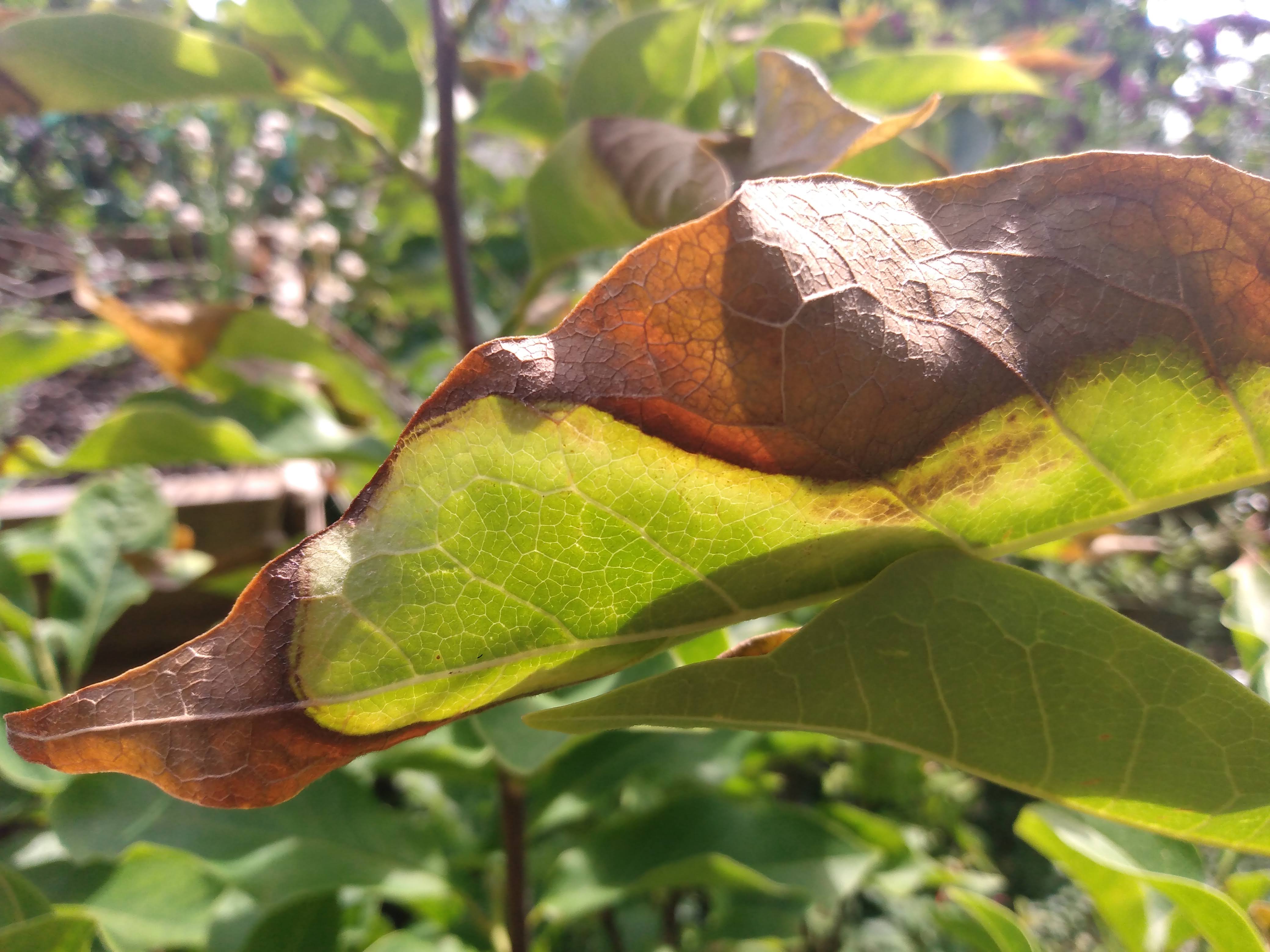 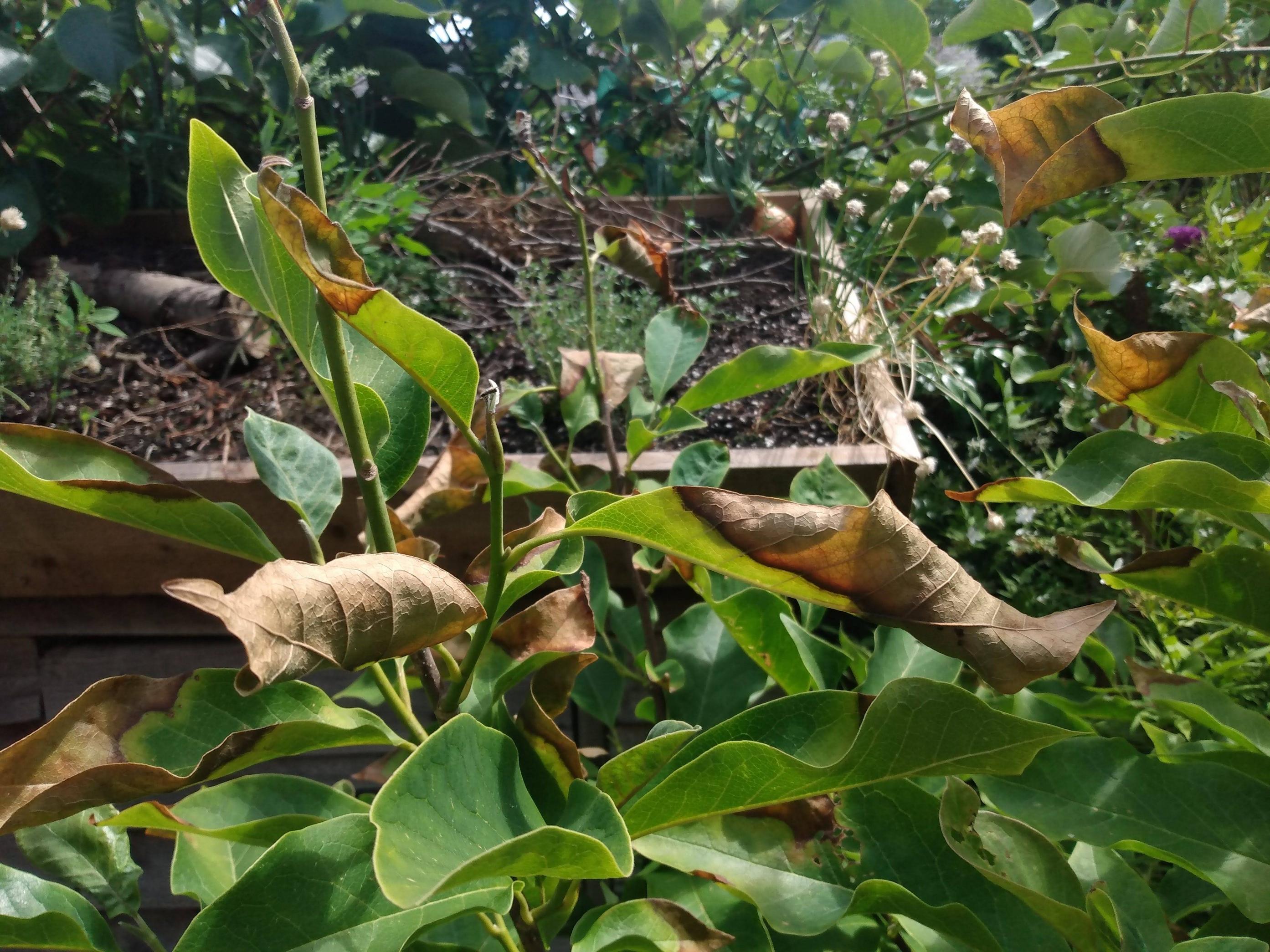 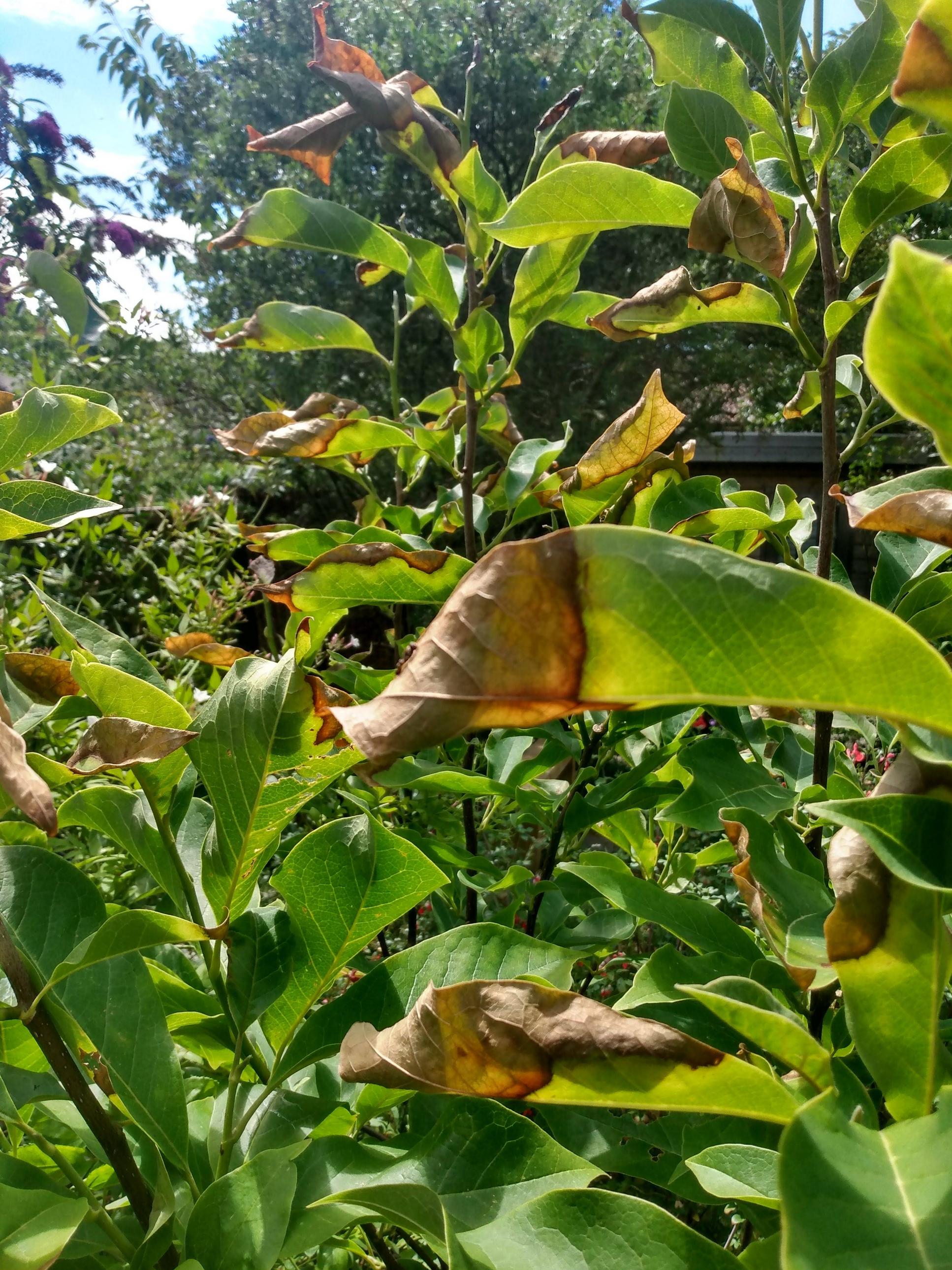 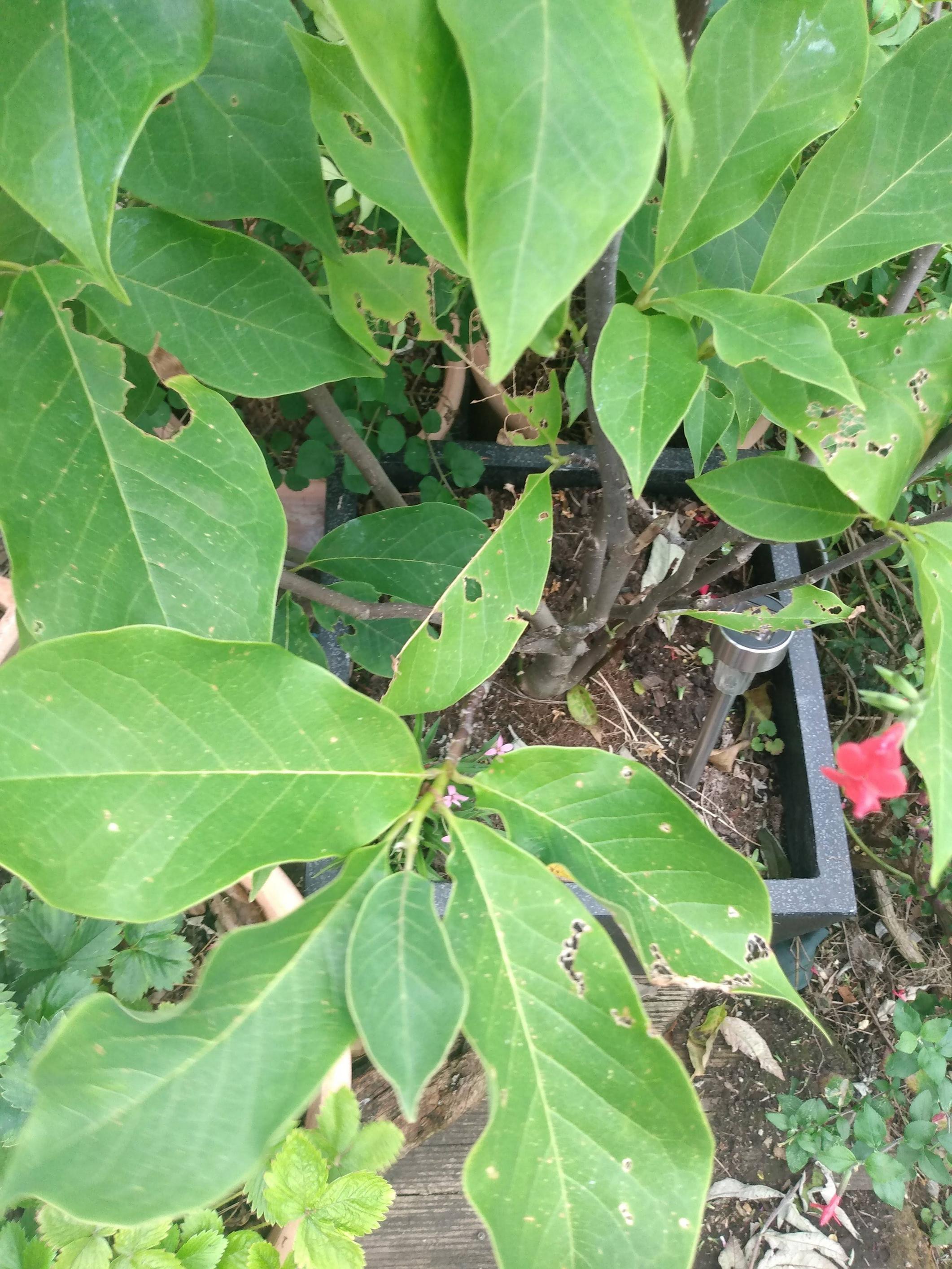 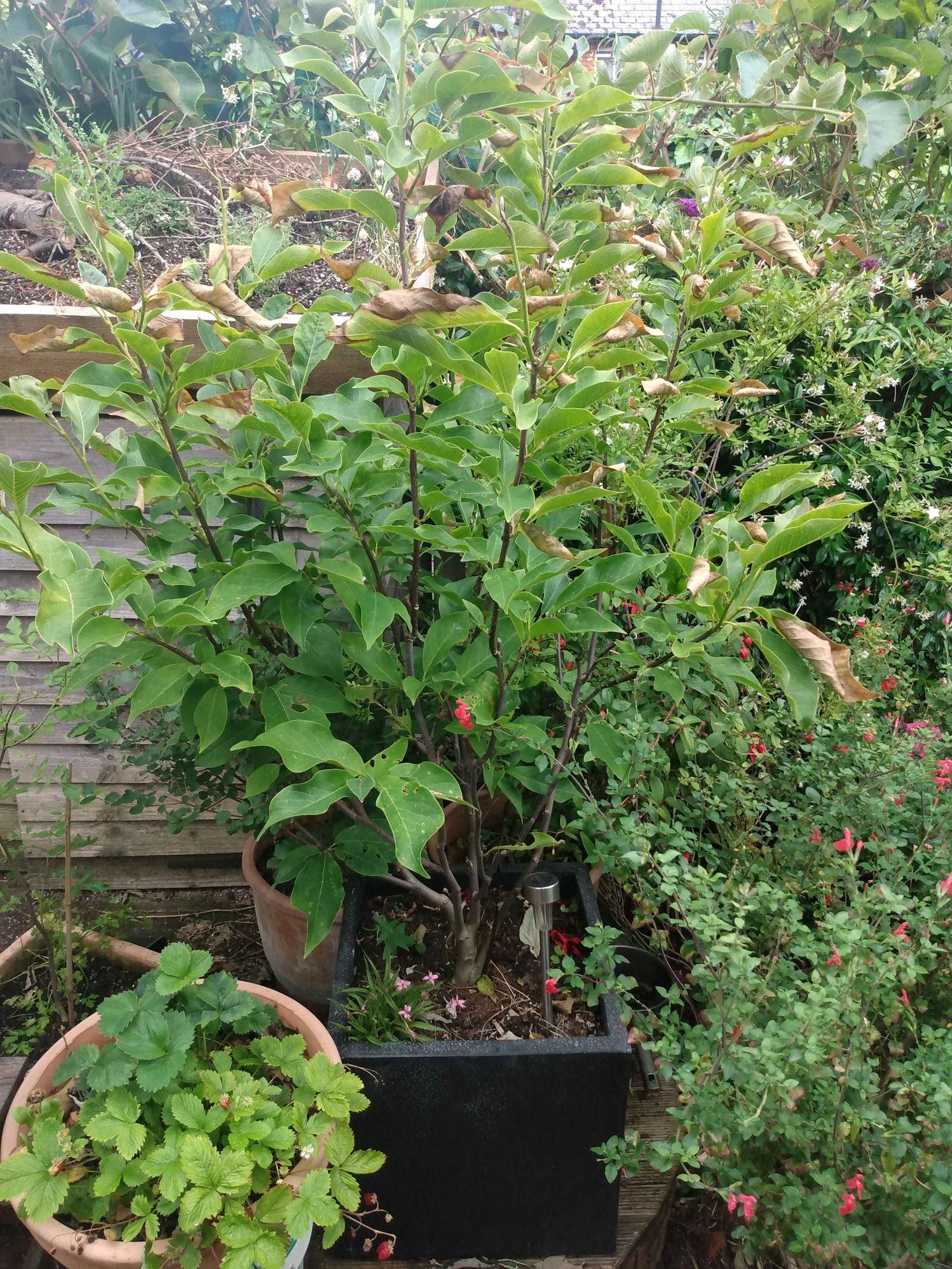 EDIT: Regarding the holes, the insect pictured below may be a possible culprit. It looks like a moth that has just hatched and cannot fly, only jump. I cannot see any distinctive wings, so they may not have developed yet. 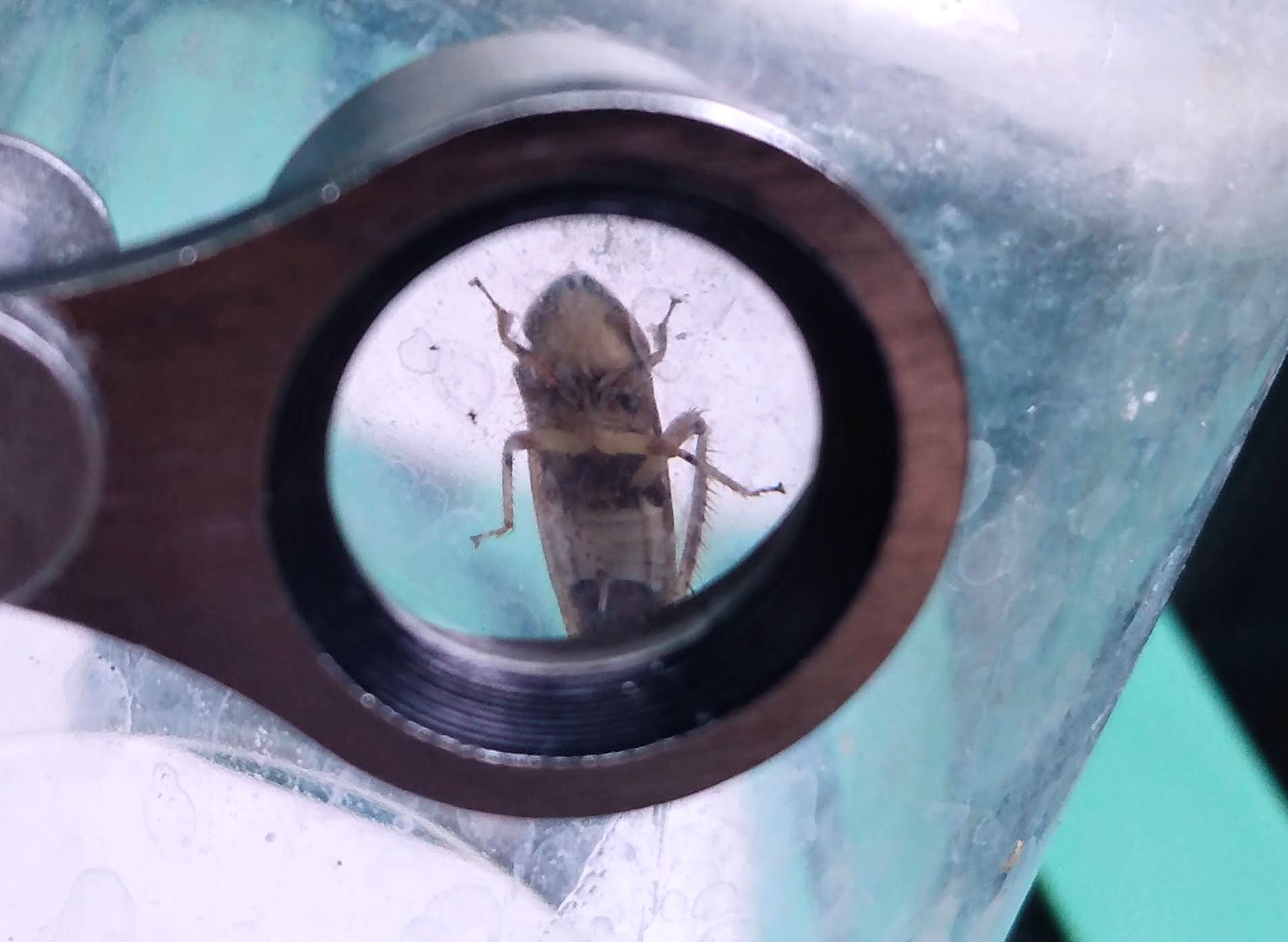 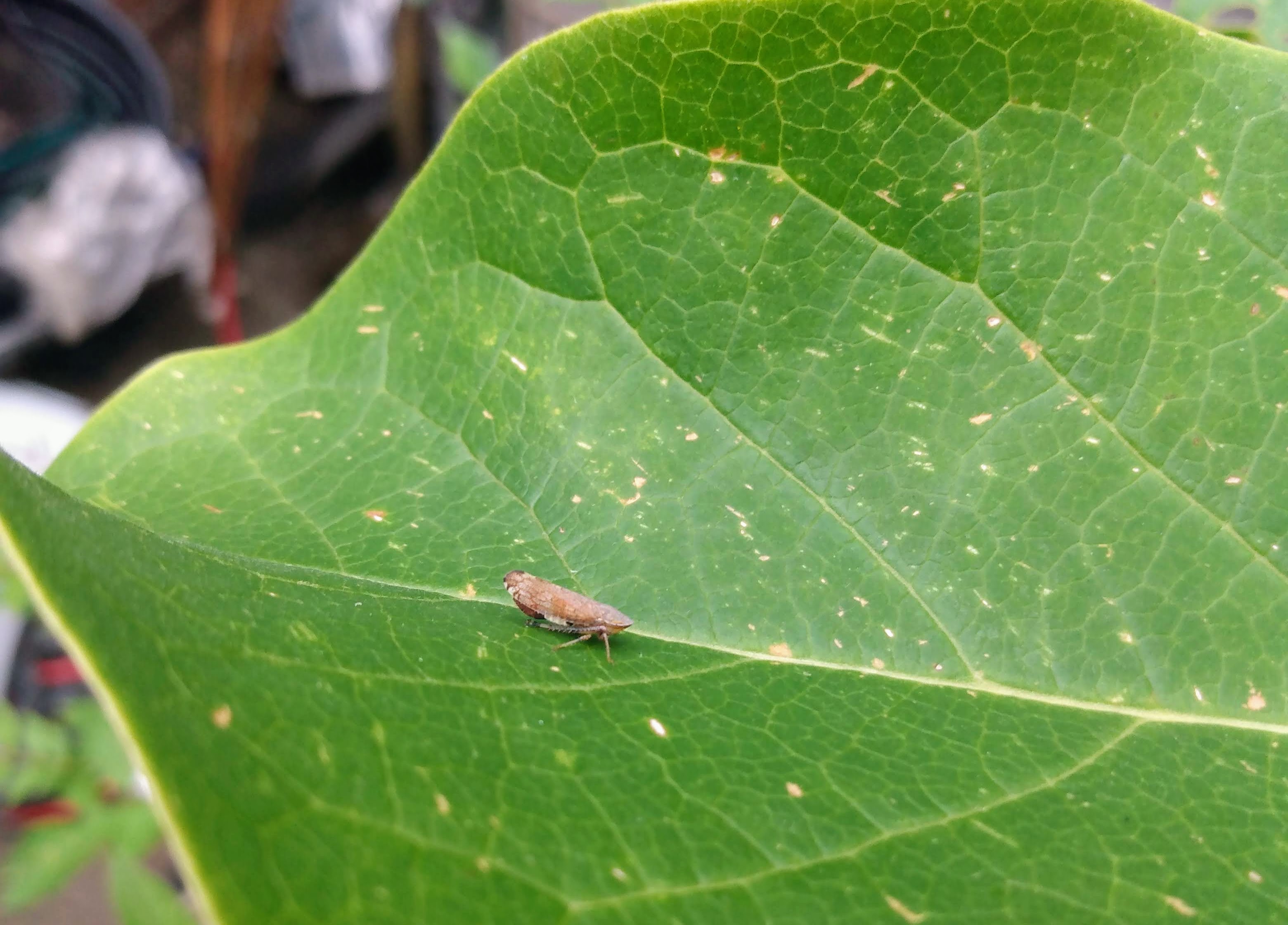 Magnolia soulangeana 'Heaven Scent' is a fast growing, deciduous small tree, reaching anywhere between 6-8 metres tall. Although you've only had it in that pot for about 18 months, it's probably outgrown the pot already, which might explain some of the brown, curling leaves. If it has outgrown its pot, the pot will be full of roots with not much soil left around them, and that means it will need more water more often because the roots can't hang on to any moisture for long. If it gets sun, then May in the UK will have been difficult for it, given the unusual heat and constant sunshine, particularly in the south east.

You can check whether there any roots venturing through the drainage hole/s in the bottom of the pot, otherwise you will need to turn it out of its pot to check if it's root bound, but unless it's really badly root bound, repotting into something larger is probably best left till autumn, though in truth, the plant will do much better planted in the ground. Magnolias don't like root disturbance, so the need to pot on into something larger every year or couple of years without causing root disturbance isn't easy.

I would think, judging by the webbing on that leaf and the number of holes on the plant's leaves, a moth laid its eggs on it, and the hatched larvae will have been responsible for the little holes, but by now, most will have hatched out into moths and will leave the plant. Many moths lay their eggs in webbing on plants, so I doubt this moth is specific to magnolia. You can clip off any badly browned leaves, but don't take any you don't need to - Magnolias aren't too keen on being pruned either, though removing a few damaged leaves won't be an issue.

Not the answer you're looking for? Browse other questions tagged plant-care leaves tree-care magnolia patio or ask your own question.

5
Where, when, and how can I plant magnolia trees?
9
Capsicum leaves are curling and deforming
5
What is wrong with this magnolia?
2
Magnolia grandiflora planted and looking stressed
2
Should this Magnolia grandiflora be pruned?
5
How to treat a magnolia with white fuzz on its leaves?
3
Understanding magnolia propagation method
1
When is the best time to prune a Magnolia tree, and how much?
2
Pyrus Calleryana 'Chanticleer' aka Ornamental Pear tree, ALL leaves are browning and curling ?disease?pest?autumn