How to grow potatoes vertically in stacked beds?

Growing potatoes for the first time, and I'm afraid I've received so much contradictory information for various peoples and sources that I may have "frankensteined" (stitched) together a growing solution that isn't going to yield much.

My wife wanted to grow potatoes in "vertical" (stacked) beds. So I built a bunch of 2ft x 2ft boxes (no floors or ceilings, just sides) out of red cedar 2x6s.

I took some potatoes from the back of the pantry that were growing "eyes" (chitting?) on them and cut them into chunks where each chunk had a really big/solid eye on it.

I placed the first 2x6 box on the ground and filled it with organic potting soil (6, about 6" worth of soil). I then buried 4 of these "homemade seed potatoes" near the 4 corners of the box in about 2" of soil (so they have about 4" of soil beneath them and 2" above them).

Then I placed the 2nd 2x6 box on top of the first one and filled it with more organic potting soil. So by the time I was done, the seed potatoes had about 4" of soil beneath them and ~8" of soil above them (2" from the remainder of the first box and 6" from the 2nd).

That was about 2 weeks ago. Today I looked at the box and, sure enough, we have potato plants/branches growing up out of the soil (so, out of the top of the 2nd box): 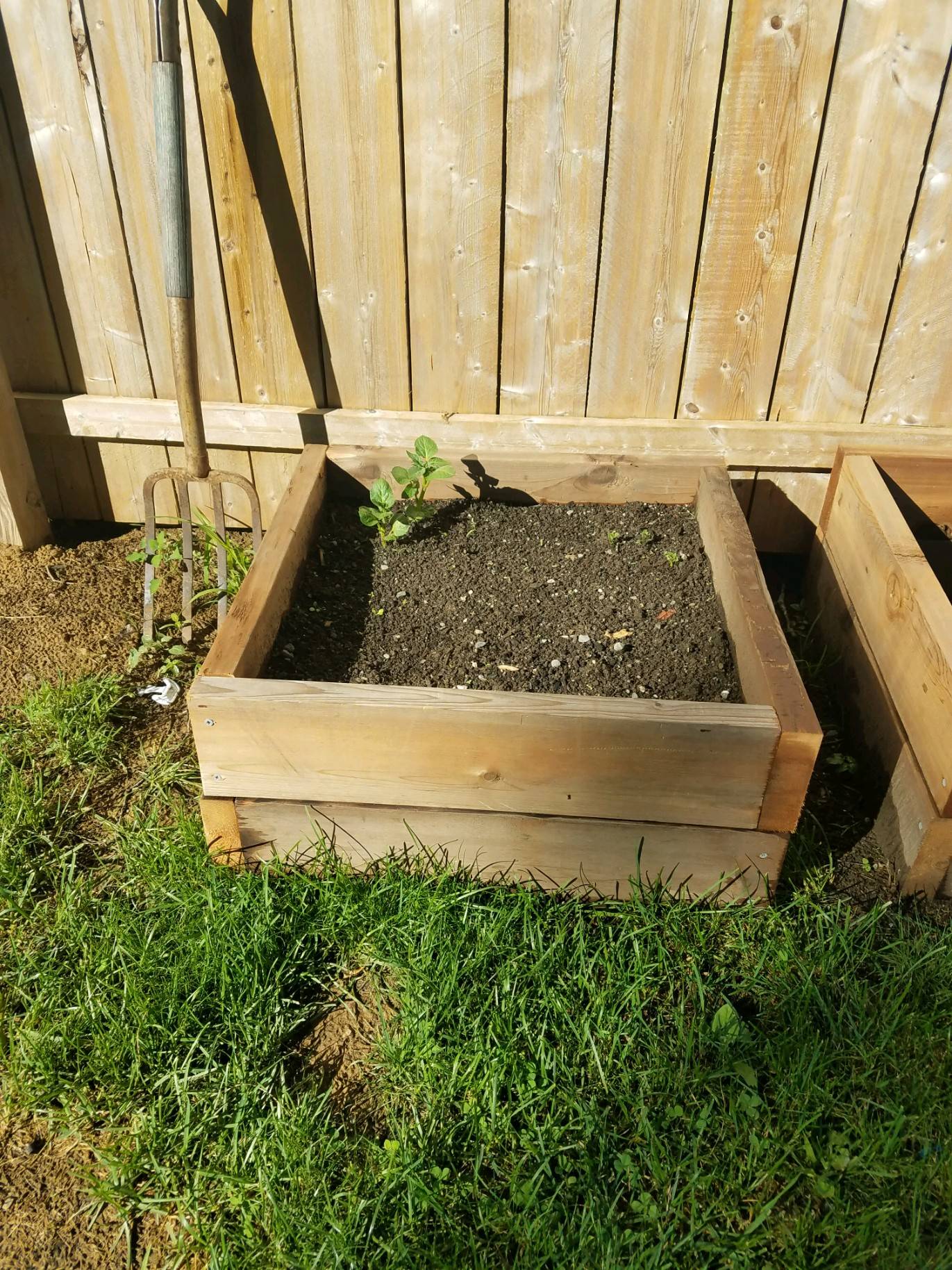 So I'm unsure of how to proceed from here. Do I just wait until the plants are all taller then the 2nd box, and then add a 3rd box on top of it and cover them back up in soil? How do I keep adding layers of boxes and allowing the potato plants to keep growing up into higher and higher layers, producing potatoes the entire time?

If you grow potatoes the "traditional" way (i.e. the traditional way in the UK) the seed potato ends up under about 12 inches of soil.

Basically, the potato grows roots from the tuber that you plant, and the new potatoes form on those roots. You don't get more roots or potatoes growing from the "stem" of the plant. The main reason for planting them in shallow soil and then adding more soil is to make sure they are buried deep enough to be in complete darkness, otherwise they turn green as they grow.

If you google for "potato towers," the total soil depth is much deeper but the potato leaves grow out of the side of the tower, and there are several layers of potatoes planted at different depths in the tower.

So adding a third box with some more soil is probably a good idea, but not more than three. Do it now - it doesn't matter if you completely bury the leaves. They will soon reappear above ground, and large leaves and stems are more likely to be damaged than small ones when you add more soil.

Not the answer you're looking for? Browse other questions tagged raised-beds potatoes or ask your own question.

9
What should I do with some volunteer potatoes growing in my compost pile?
6
Black spots, curling leaves on potatoes, help identify problem
5
Growing Potatoes in small space
5
Will the worm population in my raised beds be OK during cold or hot weather?
5
Will potatoes in containers grow more potatoes?
5
Potato plants have tiny leaves and grow really tall
1
Starting Raised Garden Beds
1
How and when to harvest potatoes grown in an unorthodox bed?
17
Do potatoes produce seeds that you can store and/or replant?
3
Possible to grow sweet potatoes in towers?