Pepper plants are showing strange, deformed new growth, what could it be? Virus? Deficiency? Herbicide?

New-ish gardener here! This year I have planted 5 varieties of peppers in a brand new raised bed in central Arkansas (zone 7b). Fill for the raised bed is 100% compost purchased from a local plant store, with no amendments or additions.

Initially all of the peppers saw slow growth through the cooler, wetter weeks after transplanting, but as it has warmed up most of them have grown quickly. At first 2 of the plants showed signs of strange growth, including new leaves curling, thickening, becoming harder, darkening and areas of new growth looking strange and stunted. Because of the presence of these symptoms only on new growth, I assumed a calcium deficiency. (google image results for "pepper plant calcium deficiency" show at least one result that looks like my plants, but the comments were inconclusive). Several posts here have suggested that ongoing pest damage could cause this, but I have seen very few pests and have preemptively applied neem oil on a couple of occasions.

In the last few weeks, new growth on some of the surrounding plants has started to show some of the same symptoms and now I am not so sure what could be going wrong here. I'm starting to think that it could be one of the following:

I'm trying to determine if any of the above causes are an obvious cause of these symptoms.

In addition, These plants are planted within 5-10 feet of a bed of tomatoes in similar planting conditions, some of which are showing leaf curl which does not resemble this, and a potted ground cherry plant in store-bought potting soil does have similar symptoms.

I've attached some images that should show the affected area of a couple of the plants, as well as a previously healthy plant that is now affected. I can provide any additional photos, including ones of surrounding plants, to help diagnose this. 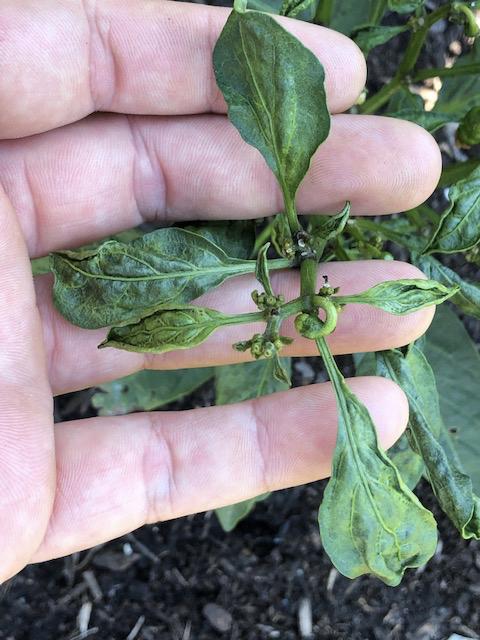 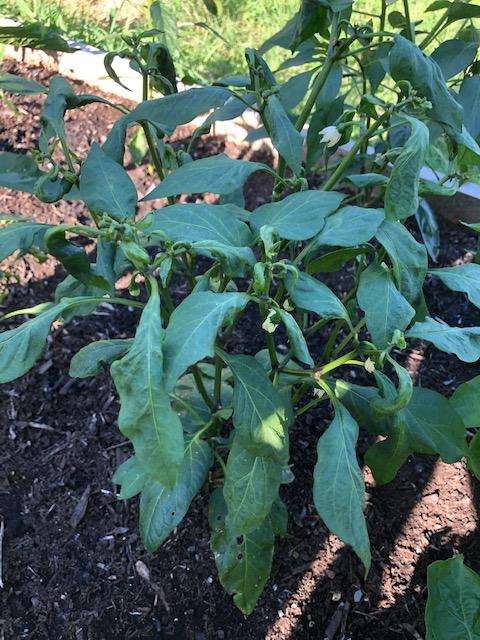 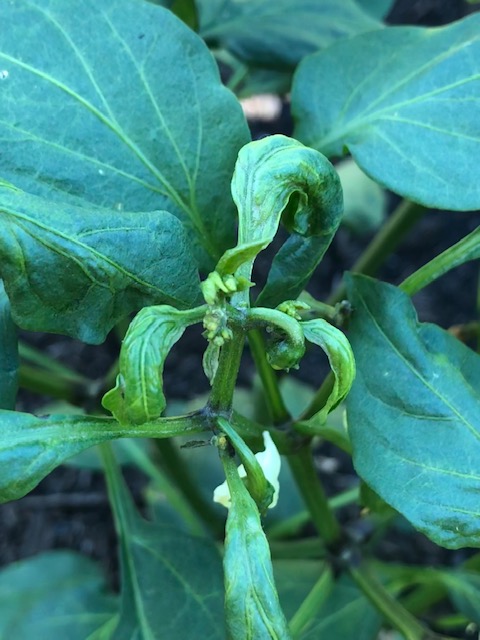 If you filled the bed completely using only municipal compost with no soil, that might be the problem. Composted materials of this type are meant for mulching or digging into garden soil; they are not usually suitable for use as a planting medium, especially not in a contained area. If your raised bed is open at the bottom and sitting directly on soil,that's not quite so contained as a raised bed on legs - not sure which you've got, but even so, there is no soil in the raised bed, only the compost. You could try checking the source to see if it's been produced using a hot, aerobic method, which would mean it is suitable for use as a planting medium, but more usually, these are not produced in that way.

The other possibility is there is some contamination from pesticides (usually herbicides) of some sort; this could be present in the compost, or could be caused by spray drift from you or someone else spraying some sort of pesticide nearby. Note that composted materials meant for soil conditioning purposes do not usually cause problems when mixed in with soil in open ground, though some horse manure can sometimes be contaminated with a particular herbicide.

My son got couple yards ( he is young and has a truck) of great looking, free mulched soil from raised beds at an apartment complex that was removing the beds. He put it in his own raised beds with results similar to yours. LATER he found out the apartment complex had been using herbicide on the raised beds because the residents were not using them and they were full of weeds . After 3 years he was able to grow in the beds. Easy to imagine you encountered some variation of this scenario.

Look into "Tomato russet mite" which also affects bell peppers. The damage from russet mite looks similar to your photos. I've had the same issue in my garden for years and could not work out what was causing it. And then one day, someone mentioned tomato russet mite in a Facebook gardening post I was following and when I looked into it, it seemed to match what was happening in my garden. It was so good to finally have an answer. Hope this helps you too. 🙂

Not the answer you're looking for? Browse other questions tagged diseases peppers nutrients herbicide or ask your own question.

7
Are my tomato plants damaged by a chemical or a disease?
4
Dry brown patches on cayenne chilli plant leaves, leaves starting to curl, tiny black spots
2
Is this a desease or pest on my pepper-seedlings?
5
When is the critical period for blossom end rot in zucchinis / courgettes?
4
Why are my morning glories stunted/deformed?
3
What are these marks on pepper leaves?
1
Tomato plant stem and leaves turning dark green/black with yellow circles
2
White dots on pepper plant leaf. Which nutrient/fungal problem?