I just had an arborist look at a red maple with a long bark split in my yard. His diagnosis was that it was struck by lightning (there was a close lightning strike a few months ago) and the tree needs to come down.

The tree is approx 40-50 ft tall and roughly a 30" diameter. Not a giant, but no sapling for sure! Exact measurements coming.

The bark is split but the wood underneath is solid.

The tree is roughly between my house and my neighbor. It can fall in the back yard and hit nothing, any other direction and there will be structural damage.

Wife got some pictures, there is clearly something wrong with the tree. Here is a far shot, closeups of the crack coming soon: 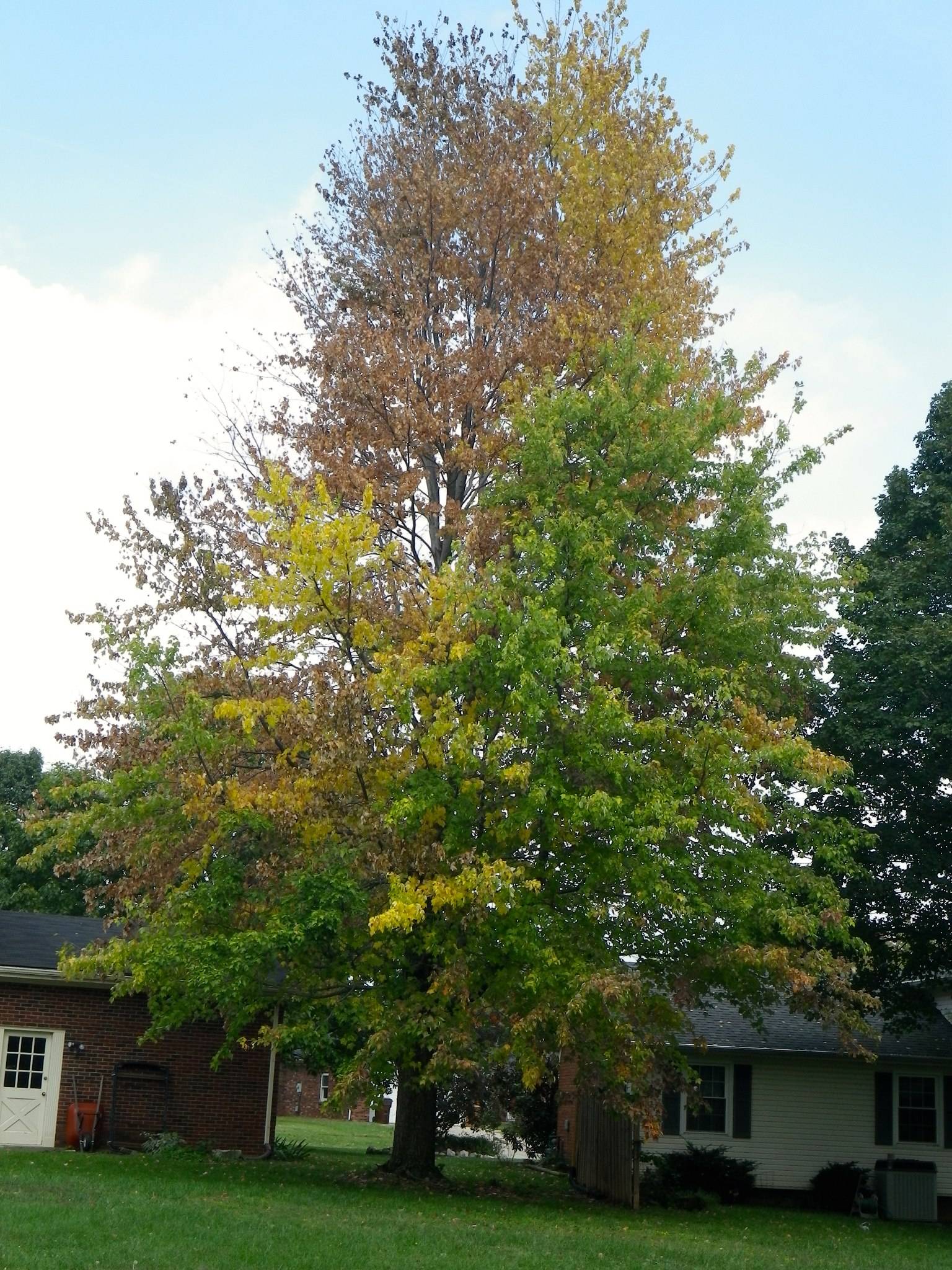 I was not overly impressed with the arborist. I have a second estimate scheduled. What questions do I need to be asking the expert?

I am considering keeping this tree for firewood. Seems daft to cut it down and haul it off only to turn around and buy a face cord later. Is this something that the pros will usually facilitate? I can handle stacking and splitting, but I need the tree sectioned.

Following up 8 months after the original post: The tree was stone dead this spring. One lonely branch had some green on it but it was clear it was done for. The bark had sloughed off the entire main trunk and was falling off in other places. I had it removed by a second local arborist. This is the place I called for a second opinion last fall. They were charging more than other places, but they gave good advice and were clearly more professional and capable than some dude with a saw and a chipper.

To work on winwaed's excellent rephrasing:

This tree is large, of significant caliper and in a tight spot. As to arborist' advice, get at least three opinions from known and/or reputable firms. Include in your questions of the arborists' all that you have mentioned above, especially if the tree is saveable through a 'watch and wait' approach, and do not hesitate to get information on their liability insurance, education and years in business. Ask others who have done significant work of this type in your area for references. It is imperative you get a good arborist! This may not mean the cheapest person but the most experienced because of the context in which you find your tree.

I do not recommend wiring unless there are significantly large limbs that can hold the tree together without creating pressure at the trees' crotch areas from which the wired limbs are tied. If you choose to remove the tree, I would not recommend a rope wrap, cut and lower method without a bucket and person in that bucket in the air with a bird's eye view of how the tree is behaving with each cut. This is dangerous work and not to be underestimated in this regard nor in cost.

Most good arborists will cut available wood into "biscuits", sized for fireplaces or, if requested, wood stoves. It takes a year to season this wood for efficient firing. I haven't met a good arborist without a splitter so make that part of your estimate. (Renting a splitter is prohibitive unless you can share the costs with others in the same situation.) Get an estimate that details every last necessary detail to remove and/or save your tree in writing. An experienced arborist will know this is a necessary part of doing business in removing such a large tree so close to structures.

Further to my comment above, it seems the OP is looking for questions to ask. We don't know the tree, and most (all?) of us are not professional arborists. So I'm going to post a few questions here, but I think a community wiki might be the best answer. Everyone could add questions to make a "Questions to ask an arborist" community wiki?

So to kick things off:

Will the crack heal itself over the next year or two?

Will the crack be a site for potential disease? Can this be avoided?

Can wires (or other devices) be added so that if it does fall, it falls in a safe direction?

How do the costs change for the arborist to: completely remove the tree, simply fell the tree, or fell and buck the tree into logs?

What certifications do you hold?

If I take this tree down, what do you recommend replacing it with?

Not the answer you're looking for? Browse other questions tagged diagnosis trees or ask your own question.

5
Why does my tree have splitting bark, dripping sap, and dead branches?
4
What's causing the bark on my maple sapling to split?
8
Oak tree - arborist says needs to be removed?
7
Any ideas on what is wrong with this tree?
5
Plum Tree Issue with Rot
5
What kind of tree is this and what should I do with it?
4
Another dying Meyer lemon tree
1
What could've caused this strange split in this tree branch?
3
Can lightning kill a tree by electrocution alone?