Why does my houseplant keep getting fungus gnats?

I have a single house plant, a larger sized plant I purchased from IKEA. It is potted in a large kitchen size garbage pail because I needed a narrow shape for it to fit in a built-in planter in my living room. This first one was a first time this plant got fungus gnats, I read that it could be caused by the top few inches of soil not draining well where they can form. I tossed that plant out and chalked it up to it maybe having badly draining soil or it came this way from the store.

I bought a new one one that is more a spiky plant and this time, I potted it with an irrigation spike so that I only water through the spike directly to the roots so no water touch the surface of the soil. I also covered the soil with a layer of diatomaceous earth.

Now, about 8 months later, there are fungus gnats coming from this new plant. This is is in a heavy pot that is awkward to remove from the planter, and I also made a thin wood covering in order to hold in the beach stones you see in the photo. Because of this, it's a big hassle every time this happens and and I'm ready to just do away with it altogether.

I also attached a macro photo I was able to take of one of the gnats. Is there something I'm missing as to why this keeps happening? Thanks for the help. 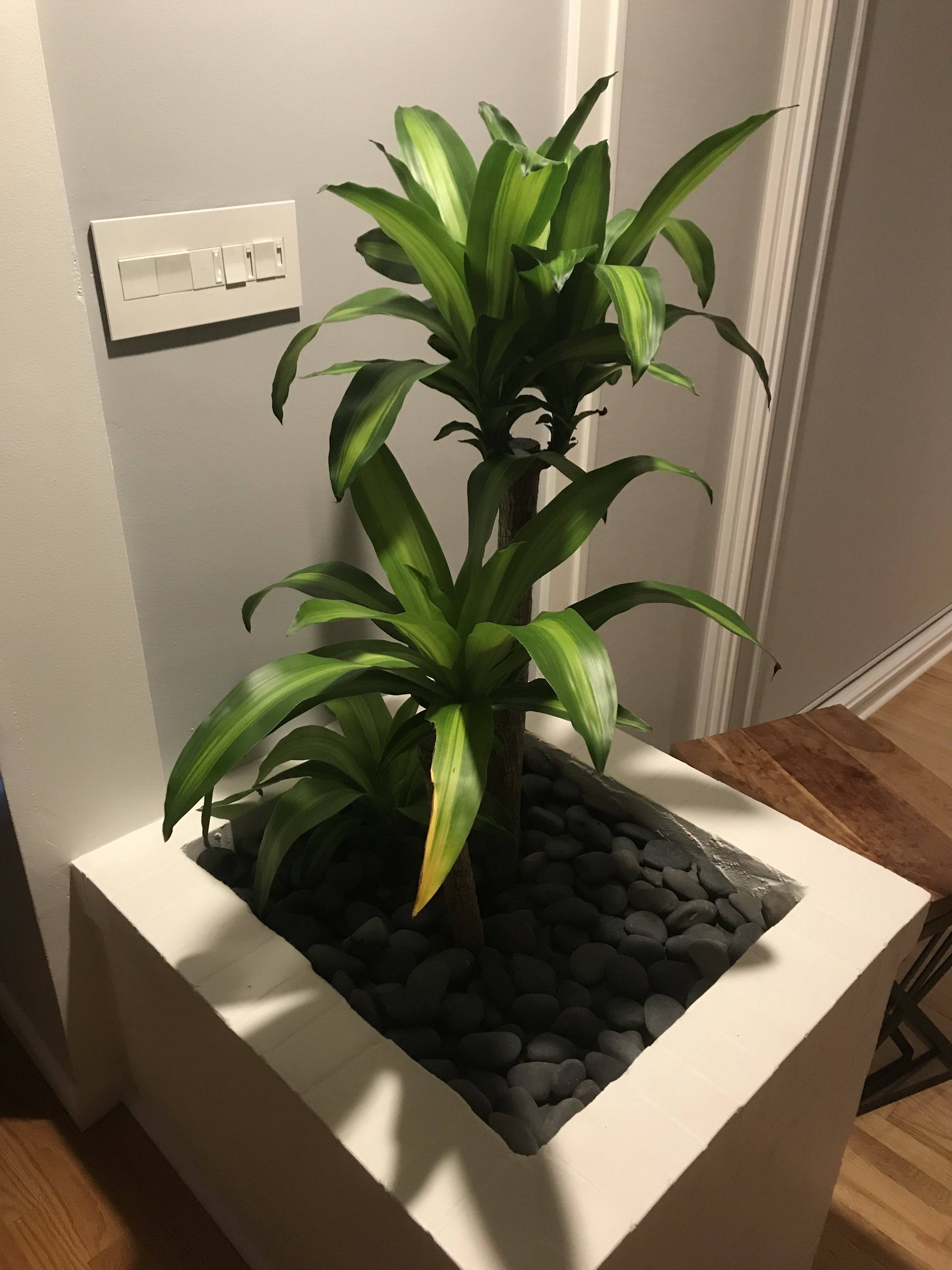 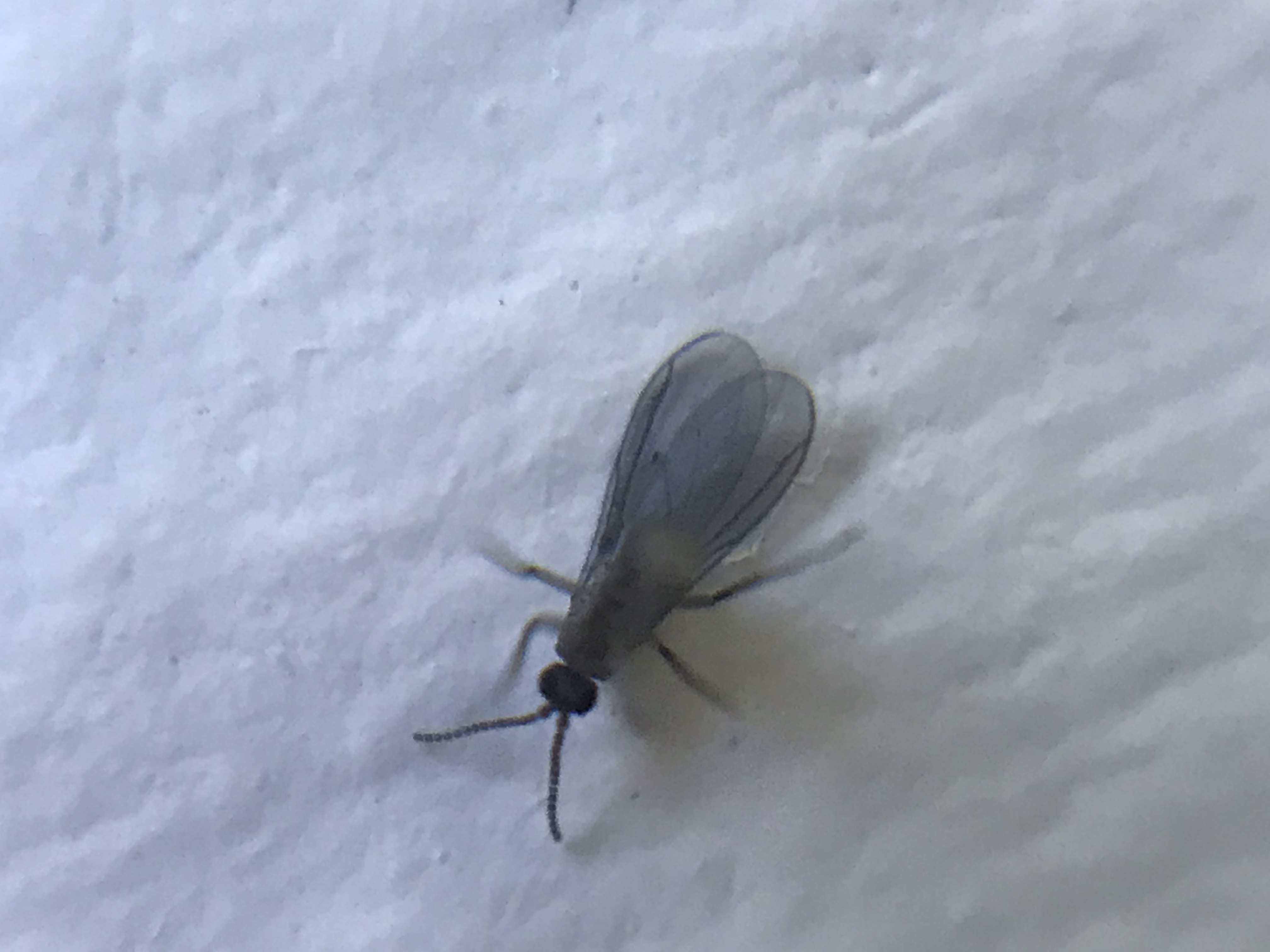 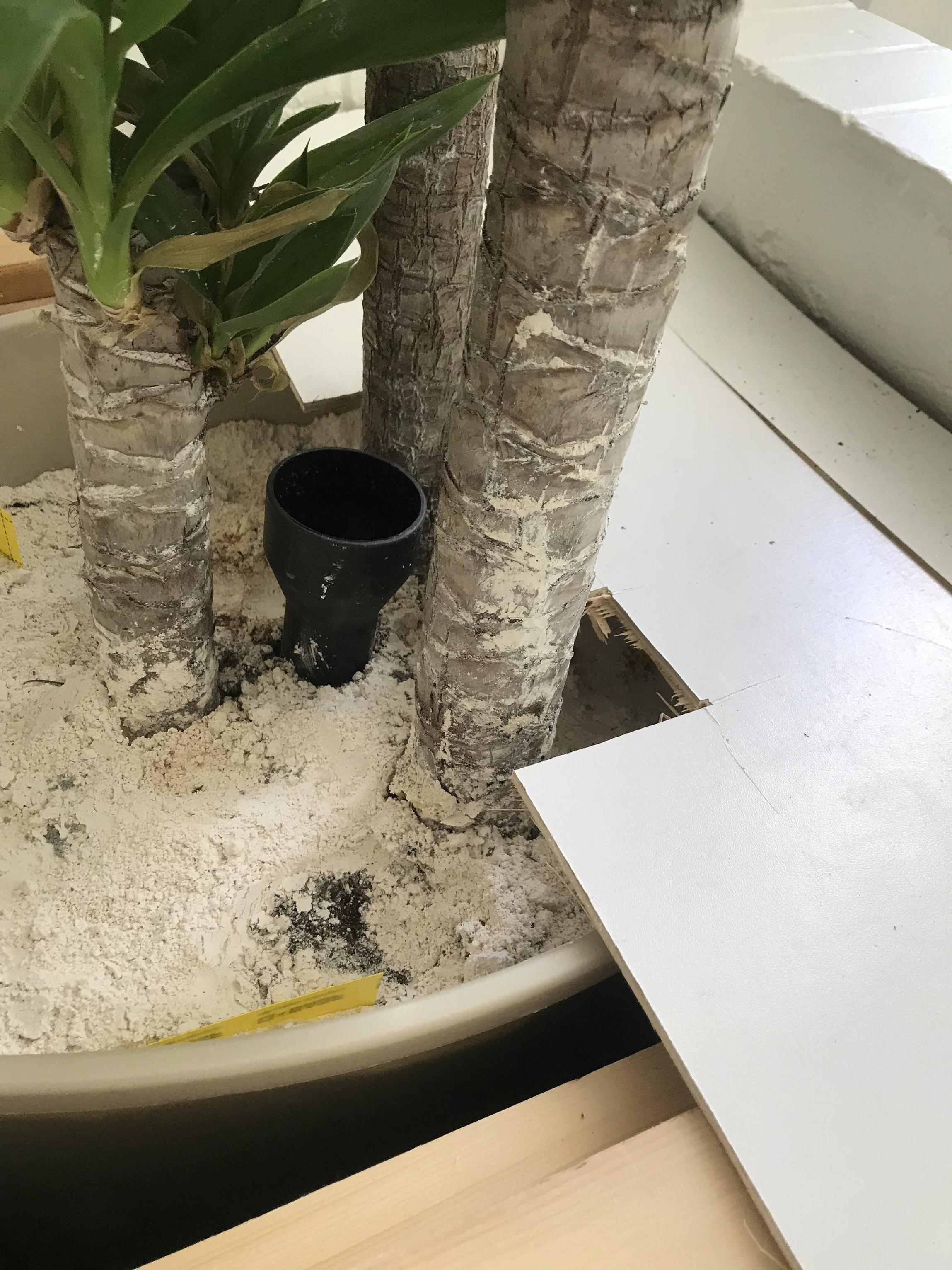 Fungus gnats infestation can be very persistent. I had them too, until I bought some nematodes online (I sound like a cheap commercial, sorry for that). These nematodes kill and eat the larvae of these insects. You can buy them online, just google it, you'll have to dissolve them in water first and then water all your plants thoroughly with the solution. Then keep the soil damp for a few weeks, so the nematodes don't dry up and can do their job. I had a bad infestation in February, and after such a nematode treatment I am still without now (it's June now).

The plant is a [Dracena frangrans "massangea"][1]. When people have problems with this plant it is usually due to over watering and not enough light for new plants.

Fungus gnats are weak flyers but can move from one plant to another. If other plants have them soon all the plants with damp soil will. They are also common in new plants as the growers don't always prioritize getting rid of fungus gnats as they don't harm the plant.

Fungus gnats also really like the soil less mix that growers use which is very high in organic matter (peat moss). The next time you re-pot this plant you could add some real soil with clay that you have sterilized in the oven. When I was doing interior landscaping the best looking mass canes we had were in shallow pots with clay soil. Water them every few weeks and that was it.

You can identify your problem plants by using yellow sticky strips. They are commonly available and fungus gnats are attracted to the color. Within a day you can see which plants have fungus gnats and can work to resolve the problem by:

I'm wondering how excess water is able to drain away from the soil in the pot - are there drainage holes in the pot, and is there a solid surface beneath the pot or something that allows water to seep away? Poor or no drainage will cause significant problems for the plant over time, and certainly will encourage the presence of fungus gnats, even if you are only watering minimally.

UPDATE You have confirmed there are drainage holes in the pot, and the pot is sitting in a tray. However, because of the difficulty of removing the plant from the tray, presumably the tray is never emptied out after watering, so any water that collects remains there, which means the bottom part of the soil is in contact with water at times. Recommended watering routines are, water when the surface of the soil is dry to the touch, water well, allow the plant to drain down freely, emptying out any outer tray or pot 30 minutes later, and again 30 minutes after that if more water has collected. Chances are that the soil in the bottom of the pot is often wet, and that may be causing the issues with fungus gnats, as well as the surface soil not being open to the free circulation of air.

Fungus gnats are very annoying but they won't actually harm your plant. Improper watering (under-watering as well as over-watering) WILL harm the plant and make it susceptible to other insects and disease. General rule of watering plants is to allow the top 1-2 inches of soil get dry between watering.

To get rid of the adult fungus gnats, place a couple of saucers or bowls, filled with soapy water, around the plant . The adults will be attracted to the water and drown. Change the water everyday.

Fun Tip ~ If you have a strong magnifying glass (at least X5), you can look at the potato slice after you remove it from the soil and see the tiny, translucent, worm like larvae. Over 10 years ago I went chemical free on all of my houseplants. I wasn't 100% sold on this method of getting rid of fungus gnats when I first heard about it, so I absolutely had to look at that first potato slice I took out of the soil.

Not the answer you're looking for? Browse other questions tagged houseplants pests bugs or ask your own question.

26
What conditions are necessary to make a potted aloe vera bloom?
3
What is this houseplant, and why has it been dropping leaves?
7
How many times do Fungus Gnats lay eggs?
4
Houseplants keep getting infections
4
Small parasite wasps around the soil
1
What is this black bug on my tomatoes
1
Spider plant soft discolored leaves
2
Fungus gnats and mushrooms in a Walmart strawberry plant
3
Tips on controlling fungus gnats