New lawn has weed rampaging through it

I’ve just seeded a lawn about four weeks ago, and two days in I saw some green growth. I thought it was one of the clover varietals, but it turns out to be a plantain weed.

Fast forward, it has spread across the lawn and is choking out the new seedlings. Problem is, I underseeded and had to add more so I still can’t step on the lawn without damaging new seedlings.

Should I manually remove by hand and potentially kill new seedlings, or let it continue to run rampant and pull it out when the lawn can take me kneeling on it (3+ weeks) 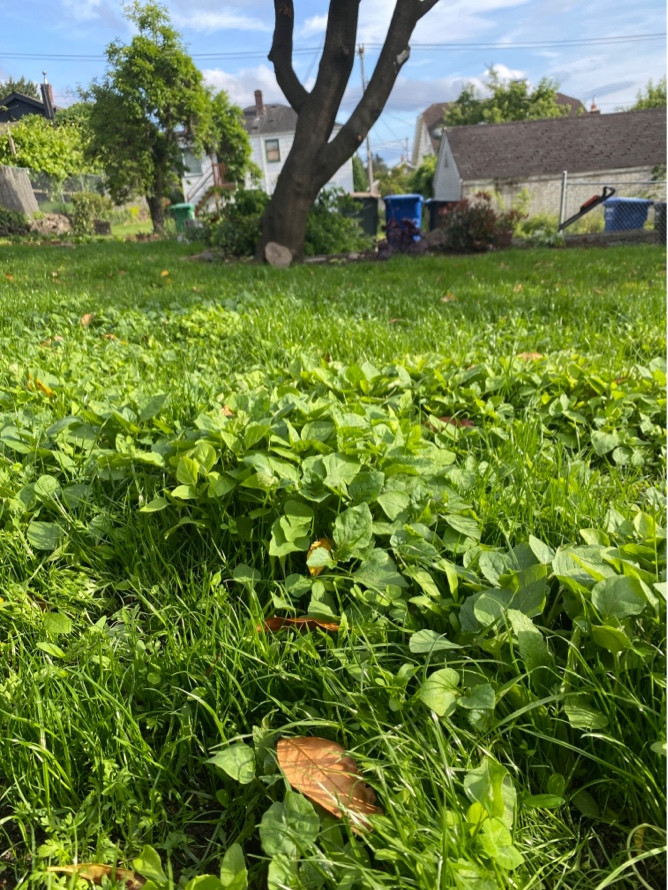 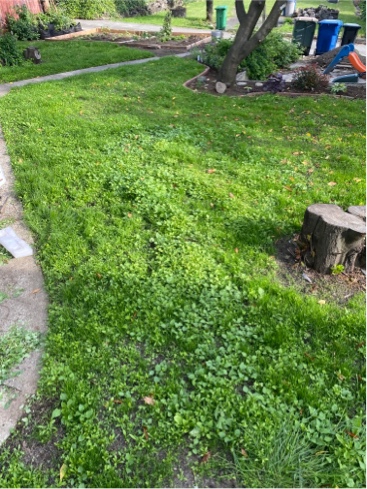 That looks more like violets than plantain (too high to be plantain, which is about a half-inch tall rosette at this point in the year, assuming that you're in the Northern Hemisphere). The first photo also shows something with a fern-like leaf (Queen Anne's Lace maybe?). The grass itself looks old enough to walk on, so if you're careful you can try to manually remove the violets, but you'll have a heck of job trying to eradicate them - no chemicals that I know of will kill violets (and an herbicide at this time is likely to harm the lawngrass).

EDIT - Well, the third picture shows that they're not violets. The venation on the leaves in that photo shows, also, that the weeds are not plantain either (plantain leaves don't have a central vein). They're certainly quick growers, which has me thinking "annual". Because they were already in the soil when you reseeded it, I also think they're either a common weed in the PNW or native to the area.

Whether annual or perennial, keep those plants from flowering and setting seed. I would also try an herbicide in a few weeks (probably something like Weed-B-Gone) if you don't want to hand-pull them.

I also think it is not a plantain.

I would mow the lawn regularly. As you see, the weed is tall, leaves exit the steam from a relatively high position. I would expect that such weeds will not survive if you cut often their leaves. The worst weeds are the the weeds which make a lot of stolons, ant they run lower on grass.

So mow your lawn regularly (maybe often then normal, and maybe the first time on lower setting). After you did it for one or two months, you should check again: maybe you may need to add some lawn seeds (and/or lawn fertilizers).

Not the answer you're looking for? Browse other questions tagged lawn weed-control seeds germination seedlings or ask your own question.

9
How do I prepare and sow a lawn organically?
4
New construction, horrible lawn
6
Preparation for a new lawn to prevent weeds and encourage growth
6
For a patchy lawn, is it better to apply pre-emergent or a lawn patch kit in the spring?
4
Any guesses what these seedlings are, and whether I should remove them?
4
Lawn repair - Heavy moss, damp.
3
Four leaf clover only growing three leaves
3
When to mow overseeded penncross grass
3
Large lawn with patches full of weeds in northwest Mass
1
How do I rehabilitate a lawn at a lakefront