I have lived in this house for many years. I have always had a bush behind the shed that I couldn't identify. I always knew it was green most of the year and that it had thorns but that was about it.

Well a couple of days ago I was looking at it and low and behold there was an green apple or an apple like fruit on it! I was excited but it wasn't like a normal apple. There was no stem, it was directly attached to the branch, and I have never seen an apple with thorns that are an inch or so long.

I'm not sure what it is or if it is native or a non-native ornamental plant. I live in New Albany, Indiana which is in southern Indiana near Louisville, KY. Also on my property here in town I have dogwoods, an ornamental cherry, a holly, some catalpa trees, a white pine, and some miscellaneous other bushes/hedges. It is an old property and I think most of the trees were placed here by a previous owner. My dad and I are very curious as to what it is.

Leaves are dark green and look very similar to an apple's. The fruit is very apple shaped, even has a dimple on the bottom, but like I said no stem. It is a little more round than most apples and about 2.5 to 3 inches in diameter. 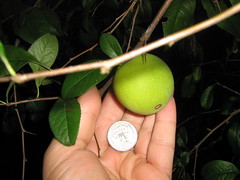 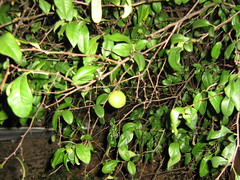 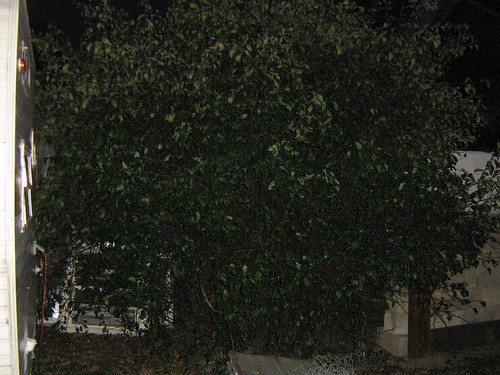 I am sure you have a Quince or Thornapple as they are sometimes referred to here in New Hampshire. I know this because we have the same plant. We have cut them down and dug them up and they continue to grow back. They are very invasive with very long and traveling roots. The flowers are beautiful but the fruit I really wouldn't eat.

I'm wondering if its a form of quince - Chaenomeles japonica. Has thorny branches, fruit is produced virtually stalkless, branches are quite dark in colour, drops its leaves in winter. Does grow in your USDA zone, although fruit production is sometimes compromised for various reasons to do with climate (fruit split, late cold killing the flowers before pollination). Tolerates shade very well. Fruits are edible, but usually used to make quince jelly, not tasting great raw. Looks like Chaenomeles to me, but to make sure whether its an apple or not, cut the fruit in half, through its equator, so to speak. If the seeds are held in a five part case, its an apple. I reckon its flowering quince though.

It is definitely FLOWERING QUINCE. Have had 2 for 20+ yrs, one in poor cold soil, one among trees in back yard. Some yrs a beautiful bloom-others puny. In good years there scads of small fruit of no consequence and are attacked by little bright orange sucking critters I've not identified. Their thorns are plentiful AND dangerous. Trimming branches must be handled with good gloves as the thorns are needle sharp and hard to see on new spring growth. They are not a people-friendly shrub but attractive much of the year and provide roosting for many birds. Tho slowly invasive, the more adventurous plants wound up with other plant enthusiasts.

At a guess it sounds like a wild apple tree. There similar to regular apples but the branches have thorns. Also the fruit is known to be of lower quality. Have a read of this.

It could also be a wild crabapple. You can read up on them here.

It sounded like you were describing thorny branches, but if the fruit itself was thorny it's probably an Osage Orange.

I just discovered one in my backyard in North Texas. I cut it open and it has a pit. I think it's a burgundy plum tree.

Native Americans made good use of this Bush the leaves help lower fevers, and ease ministration cramping among other things they called it a medicine bush settlers alway grew them for the same reasons after learning about them from the indians and called it a firebush after its fiery red blooms. I always chew a leaf everytime I pass mine in the yard.

Crab apple. The most primal ancestor to the apple.