Mail Order Indoor Bonsai - Is my soil and new bonsai plants okay, am I doing the right things?

I ordered two indoor bonsai plants (Brussel's Fukien Tea Bonsai) online. They arrived together in a box and were protected by packaging peanuts. They have been acclimating to my home for a little under a week.

The plants looked okay upon arrival, a few yellow leaves, which I removed. My main concern is the soil - it is very hard and when I watered the plants it seemed to just be bouncing off the top and running down the sides into the humidity tray below. I have had more yellowing leaves and felt that water was not really getting to the most of the soil. Today, I poked some holes with a knife in the soil and watered to hopefully get more water to the interior of the soil. 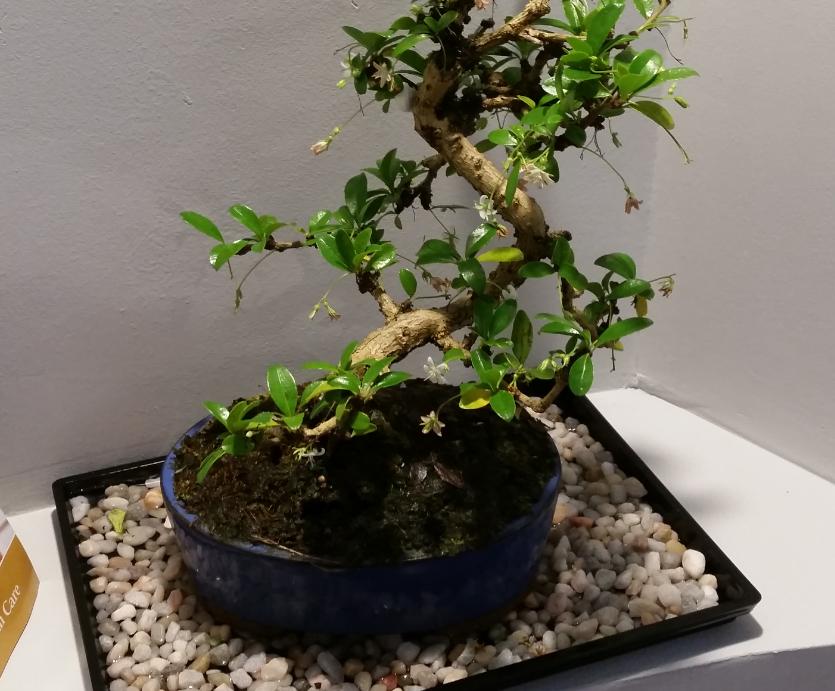 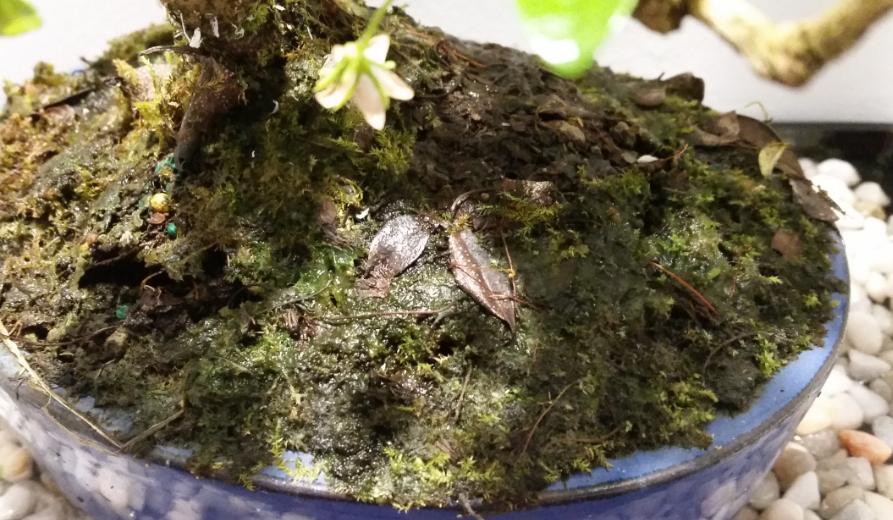 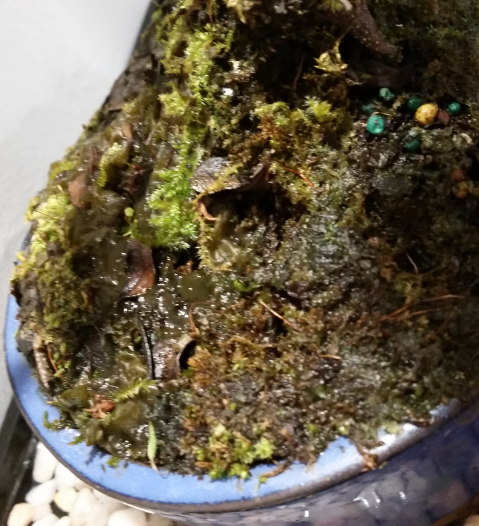 Is the soil for a bonsai supposed to be hard, should I be concerned about this? It doesn't seem normal for it to be hard and kind of slimy on top. What should I be looking for to asses the soil? And what should I do to make the soil the best it can be for these plants?

I also saw one spot that looks like some white fuzz. I thought maybe this was some fungus, and I am not sure if I need to do anything about this? 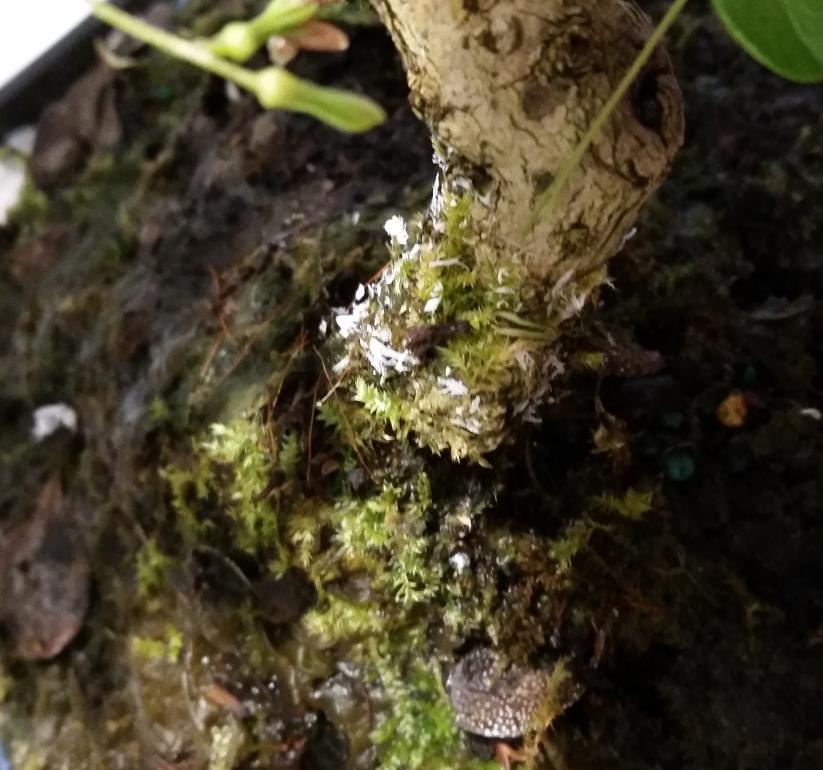 Brussels is well known for this 'issue'. You need to immerse the pot in a tub of water for 15 minutes, say, then let it drain before you sit it back on the humidity tray.

Some time around August you should do a half bare root repotting. That is, remove all the soil from one side of the trunk. You just remove the soil from the bottom and about one inch of the perimeter of the other.

I assume these came in pots and that you can see at least a pair of wires spanning across the bottom. Cut off the visible wires and cut around the perimeter with a knife/scythe or similar and the tree should readily come out of the pot.

You will need some new wire (about 2 mm) to secure the trees back into their pots. Cut each wire to the length needed to completely wrap around the respective pot. You will also need a supply of your chosen bonsai substrate, of course. Place a little in the pot, mounded in the center, place the tree on top, twisting and pressing down. Once adjusted to your desired height, secure the tree with the wires (join the ends, and with a plier, lift and twist the wires until the tree doesn't wobble), and then complete filling in the new substrate. A bamboo chop stick or the like is useful to completely work the substrate into the roots - just poke in the chop stick and wiggle, continuing until there is no further settling. Water by sprinkling.

You can bare root the other half next spring, roughly April, or wait until around August 2021 if you prefer. Just repeat the process. At that time, you should gently comb out the roots radially, all around the trunk. You will want to trim the roots back with scissors so that they end a short distance from the pot wall. With most pots you can simply flip the pot over sit the tree will combed roots atop it and use the pot bottom as a root pruning template.

Peter Chan, proprietor of Heron Bonsai in the UK, posted this YouTube video repotting a cascade juniper that should give you an idea of what you will be doing in removing and replacing the tree in its pot. There are many others on YouTube, such as this one by Bonsai Mirai in Portland OR. One or two should give you the general idea of what you will be doing even though neither is explicitly your speicies of trees.

Regarding bonsai substrate, I use Turface MVP. It is inexpensive and readily available from a Ewing Irrigation store nearby. It is not available every where but there are other makers of high-fired montmorillonite clay. I know of many people using diotomaceous earth sold in autoparts stores as oil absorbant. The ultimate is a mix of equal parts of small sized pumice, lava, and Akadama, but it is extremely expensive and has its unique problems which I suggest that you avoid for now.

Lastly, you may want to look through or even subscribe to bonsai blogs such as Adam Levigne's blog. He is in Orlando, FL and works with tropical species.

Not the answer you're looking for? Browse other questions tagged houseplants soil bonsai or ask your own question.

5
What exactly is garden soil, and why shouldn't it be used for potted plants?
5
What are the curled darkened areas on maple leaves?
4
Should I make a mini-greenhouse for my temperature-sensitive bonsai?
2
Bonsai sprout is loosing all of its leaves, help!
2
How to nurse a plant damaged from shipping back to health?
1
ZZ Plant stem rot
1
Redoing the lawn and improving soil