What is this bug skeletonizing some of my tomato leaves?

This insect is causing minor damage to tomato leaves in my garden. 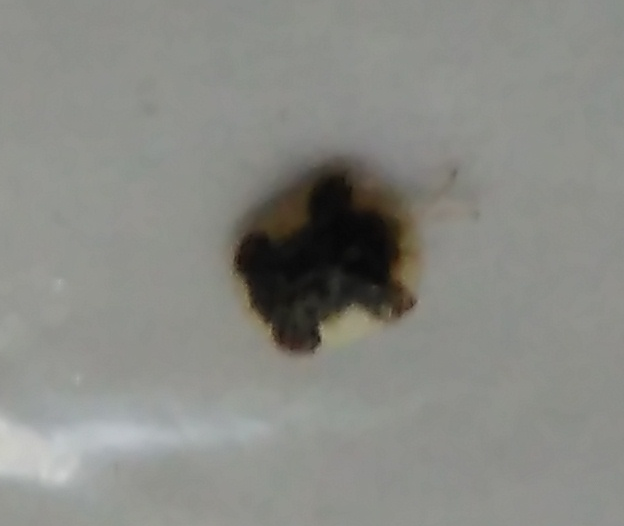 Critter is mostly black with tan wing suit around the periphery. The wing suit is not between the legs which it extends as required to move. Body about 5mm diameter (it is quite round) and nearly 10mm long including the antennae. It is quite hard and resists a press with thumb pad but yields to a thumb nail. Quite easy to catch, but can move quite rapidly when disturbed and given time to extend legs. It resembles in many ways a scale insect but does not feed like a scale insect on sap, rather it munches down on the thin leaf tissues between the veins leaving fairly large round holes and leaves skeletonized. It does not appear to be in the usual published lists of tomato bugs, so maybe it normally feeds elsewhere and for this season is holidaying in my tomato patch or it is just a juvenile stage of some more familiar pest.

I'll see if I can find it munching down on anything else locally. Located in Ontario, Canada.

tomatoes insects bugs
Share
Improve this question
asked May 29 '20 at 13:19

The proposed answer here (via a knowledgeable and esteemed colleague who wishes to remain anonymous) is tortoise beetle. They normally feed on sweet potato family (Ipomoea) but have been seen on tomato and other crops as you can discover from a search on "tomato tortoise beetle". The general consensus is that they do not do serious damage, but they are sure making a mess of some of my tomato leaves.

Not the answer you're looking for? Browse other questions tagged tomatoes insects bugs or ask your own question.

2
What is this bug, and how worried do I need to be?