Hopeless with my Areca palms

I've had my two Areca palms for over a year now and must tell you, taking care of them is very difficult but worth it! I've been recieving advise from internet and garden cennters but right now I have no idea what I am doing wrong. I water my areca palms once i put a finger in a soil down to 2cm and they feel a bit dump or almost dry. So i don't think i overwater them. I mist them often as well and there is enough space water water run off. What warries me is mold in between the palm stamps (not only on the top) so i can't remove it. And my stamps start to rotten and get a bit moldy as well. I've been thinking to repot my plans and change the soil. Anyone has been through the same problem as i do right now? Thank you in advance for any tricks or advice. 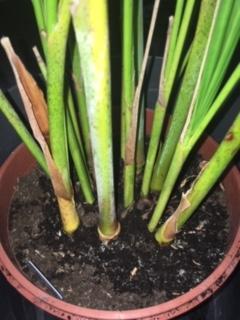 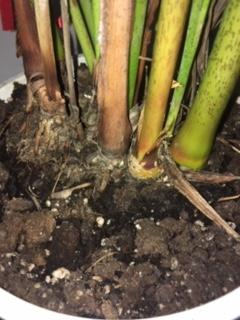 That's a lot of palm and not much pot -- after a year the roots could easily have displaced most of the dirt. Every palm I've ever re-potted has done better afterward. If it were mine, I'd pull it out of the pot, trim off any of the really long roots that wrap around the pot more than once, and refill with fresh soil. I wouldn't use standard potting soil -- it is too muddy for palms. I'd either buy palm/cactus potting soil, or mix in some perlite, mulch, or course sand/fine gravel with the standard stuff.

As Tim Nevins mentioned in his comment, too much dampness could be the cause of the mold. I believe your Areca palm can stand a lot more humidity than you can, but lack of airflow could enable the mold to grow. If it's otherwise happy in its current location, I'd leave it there; it's not easy to find a spot indoors that palms like. But if there is anything nearby, maybe I'd move it away just a bit to open up some area near the palm for better airflow. Also, I see more than a dozen stems. I believe your Areca would not mind at all if you cut out a few of those. I know, a lot of people hate to think about killing even one of their little guys, but thinning it out could improve airflow. And it would encourage the remaining stems to grow bigger, giving your palm more of a tree-like shape rather than a bush. Five or ten stems of varying heights can make a very pretty palm. Just something to consider. Cut the stem low, but above ground-level.

Not the answer you're looking for? Browse other questions tagged plant-health palm or ask your own question.

31
What are these hard white/brown spots growing on my houseplant?
3
What's Wrong with this Orchid?
4
Does anyone know what’s wrong with my Areca Palm?
3
Areca Palm - Expert Assesment Please
1
What's wrong with my house plant? (Chamaedorea)
2
Philodendron Imperial Red: What could be causing “burn spots” on leaves?
3
Tiny white blobs on plan leaves