What are these yellow splotches on some Christmas Cacti (Schlumbergera) I rescued? Are they a positive or negative sign?

A few weeks back — on a fairly windy night here in New York City — I was going out to toss out the trash when someone’s small pot of Christmas Cacti (Schlumbergera) crashed down on the ground right near me. There were four full plants in the pot but the plants were in such bad shape — semi-shriveled and clearly not cared for — that it was even hard for me to identify them in the dark.

I took them home, cleaned the dry dirt off of their roots and repotted them in small individual pots with draining. After some very basic watering, care and decent placement in sunlight they are coming back to life; the plant is stiff and looks more the way it should. Clearly the roots are taking.

Flash forward to a few days ago I noticed some odd yellow splotches on some of the leaves; see pic below with areas described here circled in red. These are mainly on leaves and near areas that are still a bit shriveled from previous neglect.

That said, are these yellow splotches a positive or negative thing? They get some decent sunlight in the morning to early afternoon and I put small amounts of water in every 3-4 days. And to me they seem fine, but just want a more informed opinion on this. 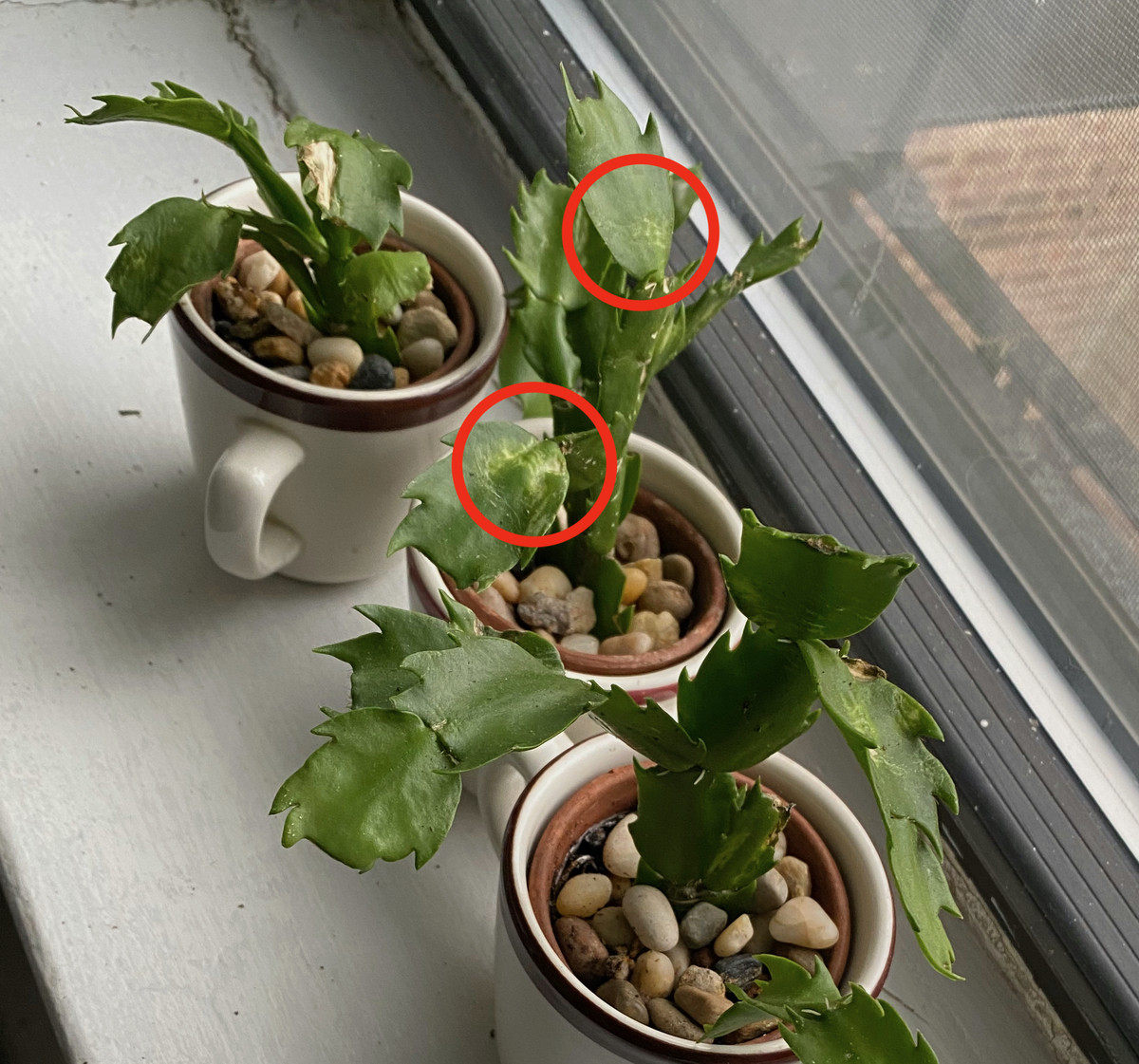 plant-care cactus holiday-cactus
Share
Improve this question
asked May 26 '20 at 1:44

Schlumbergera are forest succulents, and as such,they're not too keen on direct sun exposure; they also prefer high air humidity. If you can find somewhere that is brightly lit (daylight) with very little or no sun, they may do better. The other thing is the pebbles you've placed on the soil, which probably makes it difficult to decide whether they need water or not - the usual method is to touch the soil in the pot and if it feels dry to the touch, then water, and water thoroughly, allowing excess to drain away freely. Any outer pot or tray should be emptied 30 minutes later so the plant is not left sitting in water. Further information on care can be found here.

I'm not sure what's caused the damaged yellow areas - it may be related with the condition you found the plants in, or with sun exposure, but it looks almost like physical damage of some sort. Inspect the plant for signs of infestation by any insects that might be grazing the surface of the leaves - check beneath the leaves too.

Not the answer you're looking for? Browse other questions tagged plant-care cactus holiday-cactus or ask your own question.

3
What tools are available to deal with fallen cacti and cactus pieces?
3
What are these insects in my potted Schlumbergera?
7
Are these 'fluffy' cacti healthy?
6
Box tree turns bright yellow
1
What are these Cacti? Are they Healthy?
1
Why are my indeterminate San Marzano tomato plant's leaves turning yellow?
1
Marguerite daisy leaves are turning yellow and drying
1
Metrosideros dying