What is the name of this “zombie plant”?

When I moved into my flat a couple of years ago, there were a couple of truly pathetic-looking plants. I went to the local (in Scotland) diy home & garden store, and bought a bag of potting soil called "Black Magic". I thought at the time it was quite expensive for "dirt", but for reasons I cannot recall, I bought it anyway.

The most pitiful of the two plants I inherited looked to be some sort of a succulent. It was so dry I could find no evidence of a root system, and I assumed it was dead. There was a small clump of dry, crusty "brown matter" where the root system should have been. But the pot was small, and as I had only one other plant in "intensive care", I elected to try some of my just-purchased "Black Magic".

I began to notice changes within just a few days. I didn't think to take any "before" pictures of this pathetic little plant, but about 2 months after the "Black Magic", this is what I had: 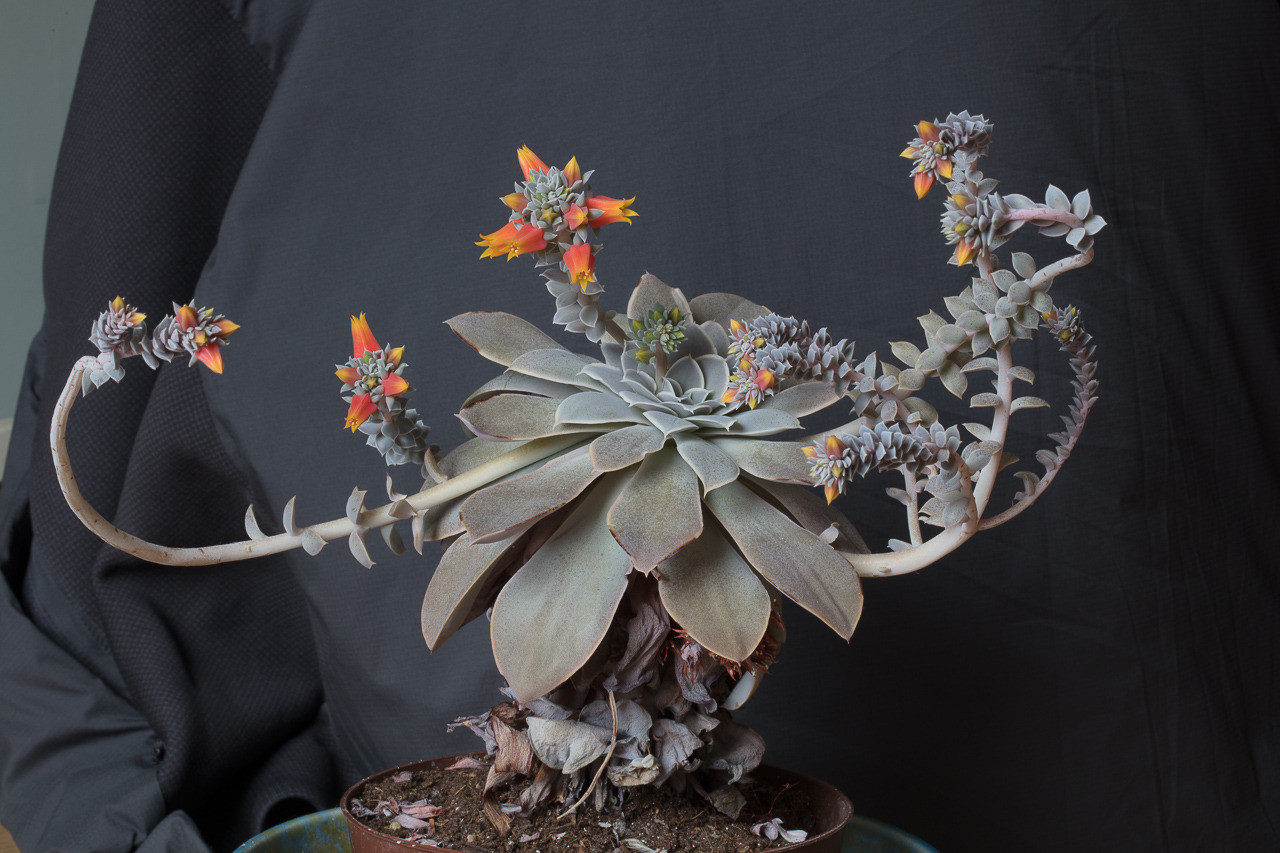 What is the name of this plant? Is anyone aware of the ingredients in this "Black Magic" potting soil - how did it manage this?

identification plant-care potting-soil
share | improve this question | |
asked May 25 at 1:24

The name you are looking for is probably Echeveria - this is a quite large and varied family of plants known as succulents, very well adapted to dry locations. A close ID might be E. pulvinata. The crusty little fibrous roots are normal, since this type of plant does not use roots like softer plants to take up the bulk of its moisture and nutrient requirements, the roots are mostly for anchorage. Most of the nutrients and water enter through the whole plant. They are specially adapted to profit from brief periods of available water; they soak up water as they can like a sponge and then gradually deflate like a balloon, using stored water internally as required. During those brief periods of wet they suddenly flower copiously producing flowers and seeds and then going mostly dormant again when things dry up.

Probably the soil was just a convenient way of allowing the plant to have access to water again. Any kind of soil might have done as well.

The composition of Black Magic potting soil is described on the back of the bag, but here's a link which mentions what it contains https://www.gardencentreretail.com/black-magic-launched/, though it seems impossible to find out the NPK of this product. It is not suitable for all plants but is quite popular with cannabis growers, though more usually in the hydroponic form.

Your plant is possibly an Echeveria, though the leaves look a little thin; the flowers certainly look like an Echeveria variety. These plants like full sun when grown in the northern hemisphere, I can't tell from your image whether yours is getting sun or not, but if not, move it somewhere it gets more light. As for the soil, it's likely this plant would have grown just as well in ordinary potting soil too, since there was obviously life left in it, despite its original condition. Care instructions for Echeveria generally here https://www.guide-to-houseplants.com/echeveria.html

Not the answer you're looking for? Browse other questions tagged identification plant-care potting-soil or ask your own question.

3
What are these orange insects under the leaves of my mandevilla?
4
Help to identify this imparipinnated cutting
3
What is the name of this Aloe looking plant?
5
Is All this blackberry plant or is there more then 1 plant?
1
Can good soil turn bad?
0
What plant is this and how can I keep it alive?
0
New plumeria cutting
1
Identify this connector for my irrigation system
1
Growing Piel de Sapo melons stalled