What is this red flowering shrub?

We're in the process of moving into our new place and these plants are in our front yard. Can you identify what they are?

Second, are they poisonous to animals (small dogs)? We plan to remove them to give us some more room in the tiny yard. The answer to this will primarily dictate when we remove them. 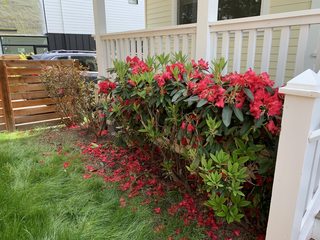 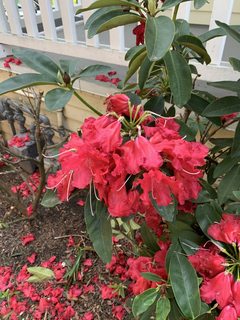 identification shrubs
Share
Improve this question
edited May 20 '20 at 11:57

The plants themselves have low toxicity, so unless your pets start eating a lot of leaves there shouldn't be any problem with that.

However honey made from the nectar is extremely toxic, and in fact was the cause of one of the earliest accounts of mass poisoning, when Roman troops invaded Turkey in the first century BCE. Regular medical problems still occur in Turkey where people eat "wild honey" in regions where there are many rhododendrons and azaleas growing wild. The fruits and seeds are also highly toxic.

Any bee-keepers in the neighbourhood will not appreciate these plants at all, since they can pollute an entire hive's production of honey into so-called "mad honey," named from the mild form of the symptoms it produces when eaten. Severe symptoms can be life threatening.

There are also reported medical incidents where children mistook the flowers for honeysuckle, and sucked the nectar expecting it to be sweet.

But as benn's answer says, they are beautiful plants so long as you can avoid the risks. You might like the video of a rhododendron garden near where I live, in the UK: https://youtu.be/cVuezDLNI8M

These are Rhododendrons, a red variety (which one I don't know, there are many). It is a popular shrub for in the garden, many adore its flowers every year.

You might want to reconsider removing them, they look very nice and healthy to me.