Are my trees roots connected and supporting each other?

I planted these Emerald Arborvitae's 5 years ago. This year they have done incredibly well and seem to be growing stronger than ever. I remember reading something about trees roots connecting and sharing nutrients and wondered if anyone here knew about that. My theory is that the trees are large enough that their roots are now connected and they have created a larger organism which is stronger and more resilient. 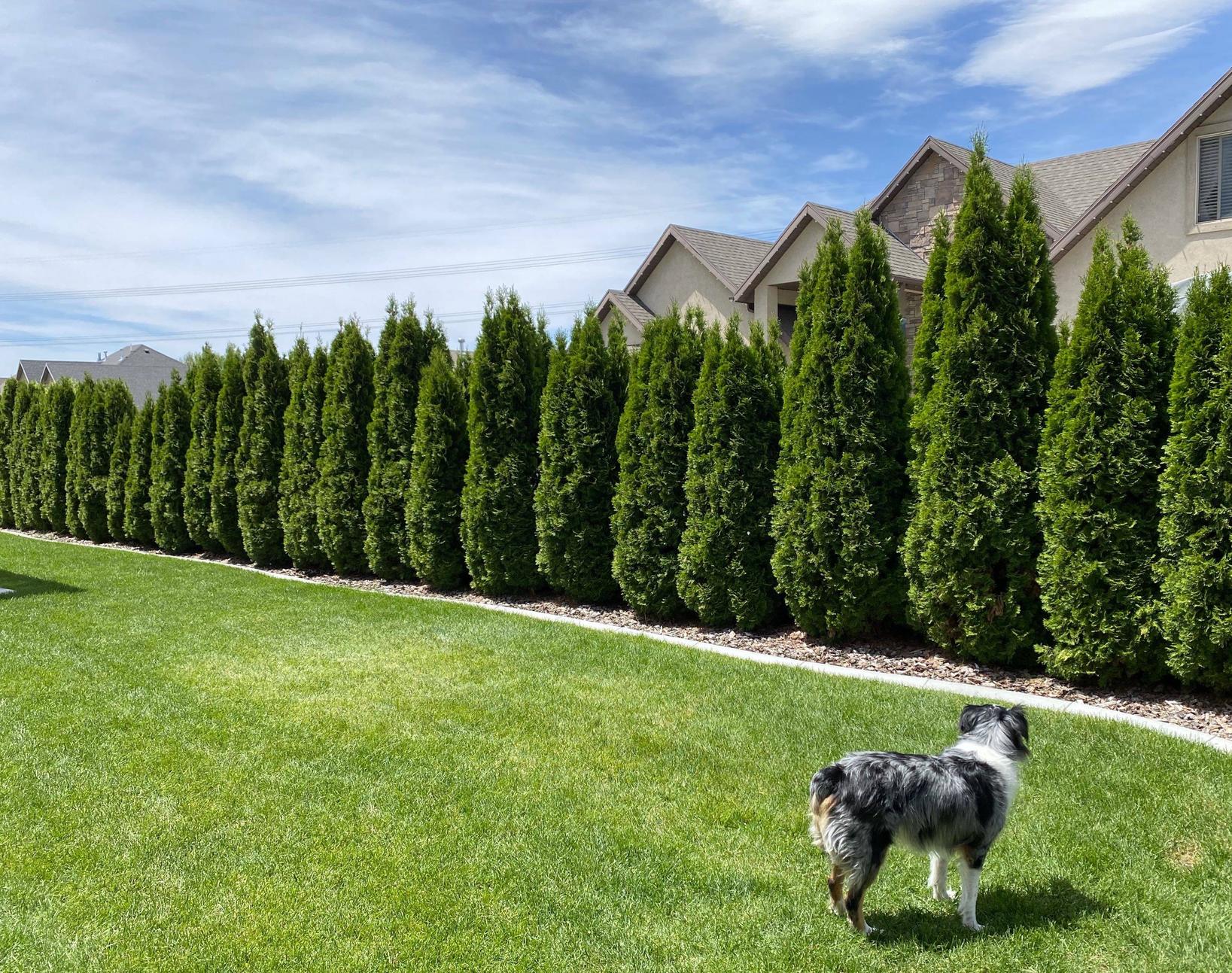 Roots of trees planted near or close to each other do not exactly support or necessarily connect with each other - each tree still has its own, individual root system, though the roots from each tree, if close together, may cross over into each other's space. Probably what you're thinking of is mycorrhizae or mycelium connections; these mycorrhizae have a beneficial, symbiotic, interconnected relationship with plants, especially trees, and connect with the roots over time, which, in a row of trees or any group of plants, means they are connected by the mycorrhizae. Anywhere that plants grow, (and particularly where trees grow) over time, will have a network of mycorrhizal connections which make up a vast network under the soil. This network of fungal strands will be particularly widespread where plants are in the soil and completely undisturbed for a length of time, so when you walk through a wood or forest, beneath your feet is a mass of mycorrhizae. It is highly likely that the relationship between plants and mycorrhizae is not only beneficial, but actually essential or critical for healthy growth in many or even all plants.

That's a very nice hedgerow, healthy and even and effective. Congrats! From the point of view of a gardener that is the result of clonal propagation (identical genetic structure) plus careful site preparation and planting. The Smithsonian, in an article "Do Trees Talk to Each Other?" talks about scientists discussing what they think about similar trees living in close contact. Odd things happen in communities that may not happen in solo plantings. But your question is directed not to scientists but gardeners whose approach is practical, what has been shown to work consistently. When I have pulled up hedge roots, I don't think I have ever seen two roots come out at the same time.

Instead of looking down at roots, we might look up at branches. Do branches of similar species interlock? We know from grafting that it is possible to join two living pieces of similar species together. But we don't often see it happening naturally in practice - I have two beech trees interlocking branches but while they are closely attached and each renders the other immobile in the strongest wind they don't seem to be intimately connected. It's a rare occurrence, with wind keeping rubbing branches from joining intimately. It could be because of the amount of cambium directly connected.

Another technique is that of pleaching, where tree branches are deliberately immobilized against supports and other specimens for the sake of visual appeal. Branches can be forced to grow closely around each other. I have not worked at all with pleached trees so I won't make any comment on that.

Underground, roots are basically immobile with respect to wind. Root tips and hairs explore for water and nutrients and will lean towards the richest sources. Earth which has already been tapped out by a neighbouring tree will be somewhat depleted of nutrient so there won't be much incentive for a root to explore the same volume; if anything you would think there was a disincentive unless it is attracted by microrrhizal attributes.

Finally I have a bit of experience planting on bedrock and soils of varying depths along the line. What I have seen is that the individuals planted where soil is shallow or especially thin cannot rely on neighbours for a helping root.

Root grafting, which is what I believe the poster is referring to, is a naturally occurring graft between closely planted trees, as explained here. Note that this site deals with dutch elm disease, which is, I believe, where this phenomenon first became widely known (if one tree on a city block became infected, all the trees on the block also became infected and treatment failed).

It's entirely possible that at least some of the arbs pictured have formed grafts among the roots, but as far as I know or can find out, there's no way to determine this from looking at the top-growth. That is, unless or until a disease strikes one tree and other nearby trees also show symptoms.

Root grafting is quite interesting if you're a fan of arboriculture. According to this paper, root grafting is known to occur in over 150 species - the researchers even found one case of inter-specific grafting. The paper also discusses the advantages this behavior can give to the grafted trees.

Not the answer you're looking for? Browse other questions tagged trees or ask your own question.

3
Why are there three guava trees grown within inches of each other?
6
How much seasonal, internal die-off of Arborvitae is natural and expected?
4
If twisted trees will suffocate each other, why do retail stores sell them together?
8
Tips to help an ash tree, trying to grow from the roots of an EAB victim
2
Will interwoven espaliered fruit trees of different types hurt or inhibit each other?
2
Wellingtonia and disturbing roots
1
Is it ok to cut surface roots of trees?
2
Understanding tree rings and estimating the age of this tree
1
Trees that get energy from foliage vs roots