What causes sudden discoloration and leaf drop in a mature lemon tree?

We have a 30yo lemon tree in a large container. It spends winters inside and summers outdoors.

We moved it outside a few weeks ago, when day temperatures were between 10 and 20 C and night temperatures at 5C and above, and it seemed initially quite happy.

It was lush and dark green (best winter ever, so far), but the top leaves may have gotten less light than the main crown while indoors. It had none of the huge etiolated leaves that indicate lack of light, though. Temperatures indoors were around 20C, because we inhabit the room.

It was fertilized regularly, following the instructions on the bottle.

After a very short time outside, leaves started to drop and roll a bit lengthwise. We suspected lack of water (although we had thought the soil to be humid enough) so we watered very thoroughly, letting the excess run off. Leaf shape went back to normal.

Since a few days we see a massive leaf drop (ca. 100 leaves in total) and discoloration: Leaves take on a yellowish, almost coppery tinge overall, in some the veins are lighter, and some are spotting grayish circles on the top that can be rubbed off (but need vigorous rubbing). The leaves are more leathery than usual and the scent is missing.

What is especially strange is that it seems as if the tree has difficulties drawing the water from the soil - after a week of dry and sunny weather, the soil is still more humid than we would expect it to be based on our experience.

We did have a very light frost, but that’s not the first time the tree was exposed to it and it never caused this kind of symptoms. 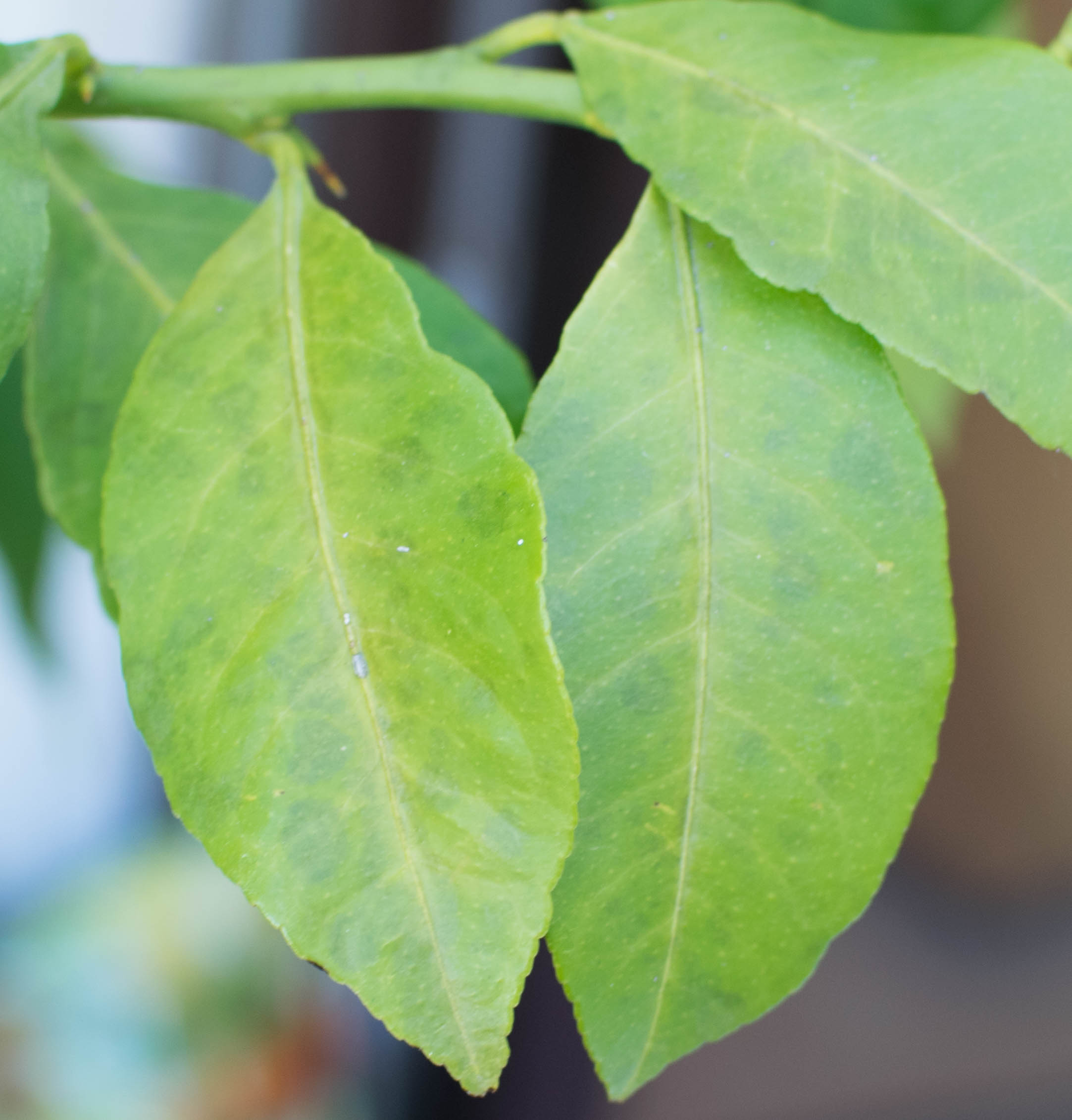 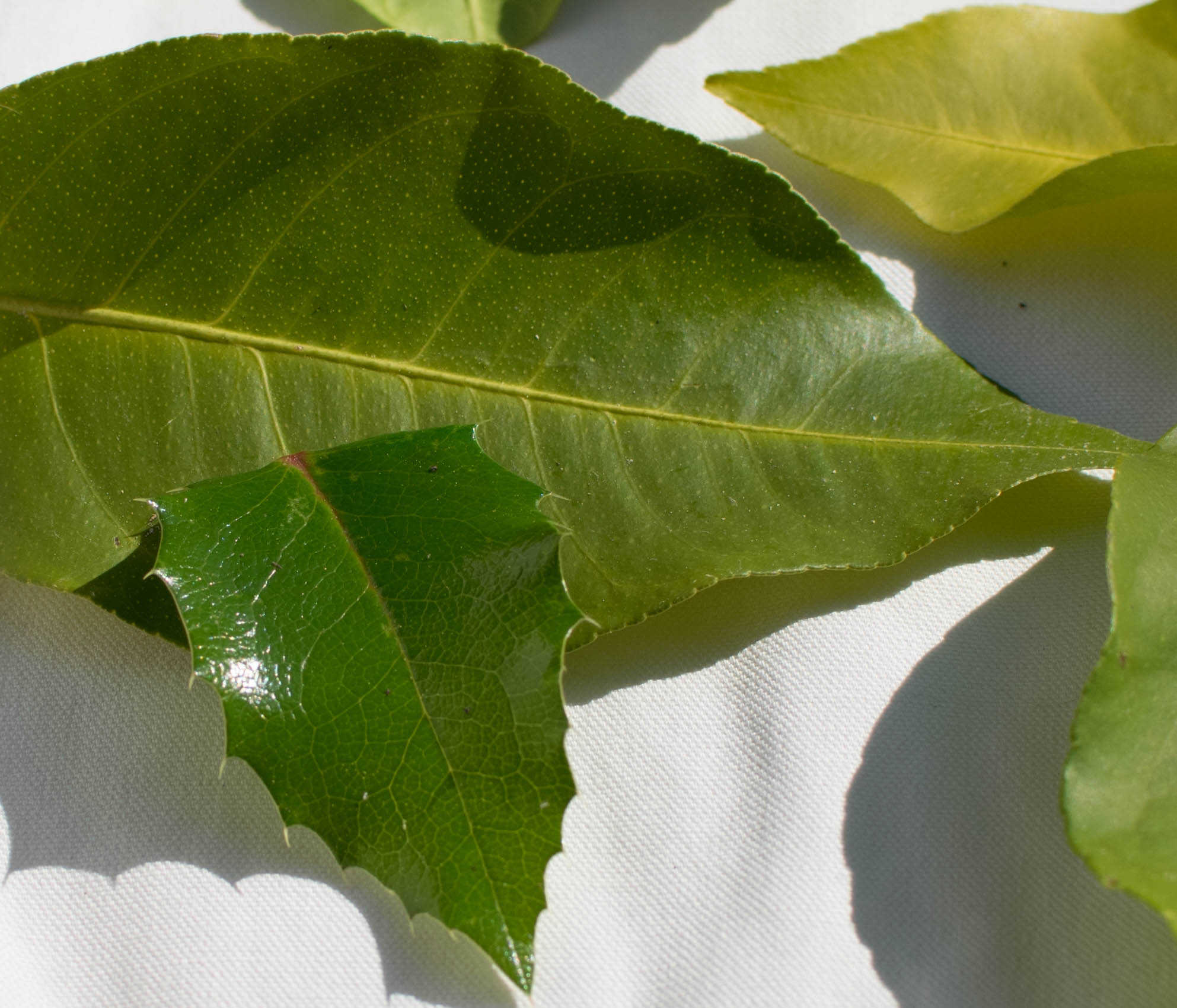 leaves lemons discoloration
Share
Improve this question
asked May 17, 2020 at 16:52

The RHS has an interesting note on nutrient deficiency. Note particularly the comment on magnesium where it indicates that lack of this nutrient in the plant can cause browning of the leaves, but more important that too much potassium can prevent uptake of magnesium. There may be a good amount of Mg. in the feed but if it gets blocked then strange things can happen. Continuous use of the same feed formulation even if slightly unbalanced may result in accumulation of potassium (K) to the detriment of Mg. For more on potassium see here. And for more on Mg. see here, particularly the part where it discusses how Mg. can easily be leached due to heavy watering.

Sometimes plants that spend part of their year inside in protected conditions can get confused as to when they are supposed to be dropping leaves since there is no clear climatic guide to trigger ongoing leaf fall. I think this makes them very sensitive to soil nutrient changes and can result in massive leaf fall. We just hope that new leaves appear and it soldiers on.

Not the answer you're looking for? Browse other questions tagged leaves lemons discoloration or ask your own question.

10
Lemon tree leaf deformation
1
How can I save my miniature roses?
0
Indoor lemon/lime - wilt leaves which yellow and drop
1
Lemon tree that got left outside during a cold night
1
Is it possible to revive a lemon tree with no leaves and one lemon?