Which species is this Eucalyptus?

I noticed this spectacularly blue Eucalyptus tree growing in Seattle (USDA zone 8). It is partially shaded by a large Douglas fir and a building.

Does anyone know Eucalyptus well enough to identify the tree's species? 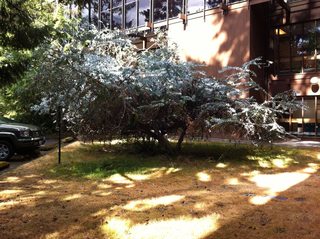 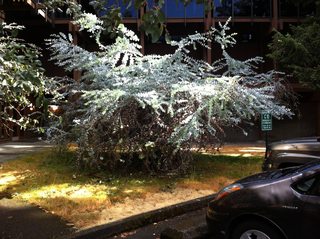 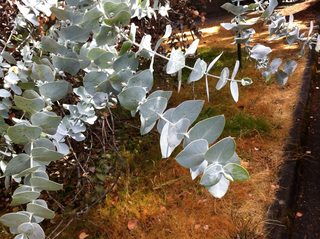 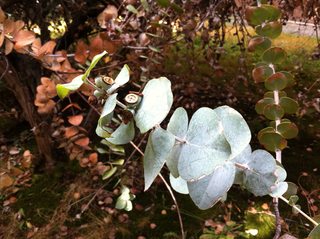 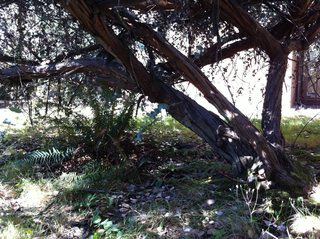 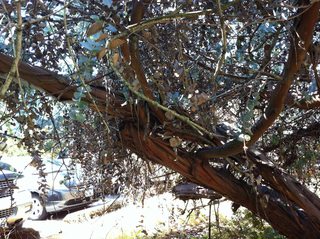 Update: I stopped by to look more closely at the tree in light of Bamboo's answer. Judging from the branching and pruning wounds, this tree never had a upright leader. In fact, it appears incapable of growing a branch vertically. All branching is lateral.

I added two more photos hoping it will help with the identification. Note that if you click on a photo, you get access to a much larger version.

Based on the leaves, I'd say it's a Silver Dollar Gum (Eucalyptus cinerea). The immature leaves grow right off the branch but you'll notice in a lot of images on the web there is a stalk between the leaf and the branch. This occurs during maturing, read up on it on the wikipedia page below.

More info from about.com and wikipedia.org

Its really difficult to see the plant clearly because of the dappled sunlight effect. What's extraordinary is the fact that it doesn't appear to be particularly subject to apical domination- the young leaves shown in the bottom two pictures indicate probably E. gunni, but that is subject to very strong apical domination and relentlessly grows upwards, however often its cut. Although there's a faint possibility its E. perriniana, again cut, I can't really see the typical paired leaves surrounding the stem which identifies this variety. Another ID factor for E. perriniana is the fact the stems have distinct notches or rings on them, made by the older leaves spinning round before falling.

The colour of the bark, particularly beneath any peeled parts, is important for ID - sight of the mature leaves and flowers helps too, but given this one's obviously been cut more than once, there don't seem to be any mature leaves to have a look at.

Note that most eucalyptus produce juvenile foliage which is blue and often rounded, but if let to grow naturally, that foliage becomes greener and elongated, loosing the round leaves, though any new growth towards the top will be the blue, rounded foliage. Eucalyptus gunni, for instance, will reach over 60 feet if left, but it can be grown as a small tree with young leaves by constant cutting, or cut virtually to the ground in spring, when it forms a shrub about 6 feet by onset of autumn, comprised entirely of blue, rounded, foliage.