What are these white fuzzy growths on the soil of my lawn?

This morning, at about 11am, I went outside and found white fuzzy patches growing on the exposed soil of my lawn in a shady spot (in north-west England). It does not appear to be on the grass itself. See attached images. On closer inspection, it was also present on the soil under the grass in the non-shady non-exposed spots. I've searched the internet and this stackexchange, and have come across several white growths on soil, but nothing looks quite like this. I'm assuming it is some sort of mould or fungal growth. I'd like to know what it is, whether it is harmful, either to the grass or to a child, and whether it will go away on its own or if there is something I can do to treat it.

Some background: I recently thoroughly dethatched the lawn with a manual rolling scarifier as it had a significant thatch (and probably moss) problem. I applied EVERGREEN NO MOSS NO RAKE lawn feed at the recommended rate with a hand-held spreader, as well as lawn seed (various varieties left over in old boxes, maybe up to a year old), and then treaded and watered it in. I then watered with a sprinkler for about 20 minutes a couple of times a day. This was exactly one week ago. The grass and soil got quite wet, and I'm thinking it might not have needed the extra water, but I was worried about the soil drying out (it had been very dry prior to the overseeding) and causing problems with the new seedlings. 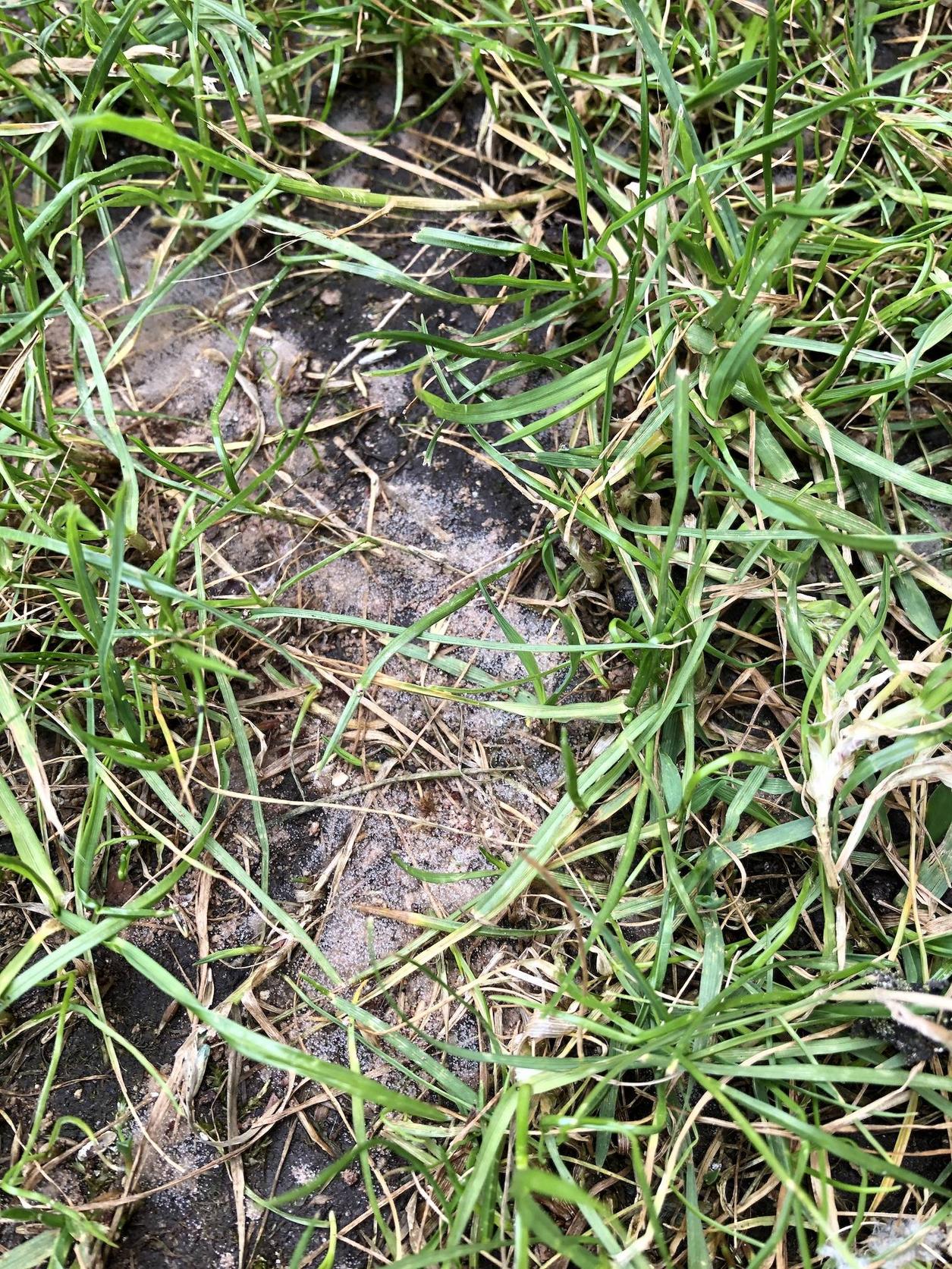 Thanks for any advice!

The white fuzzy growth is fungal hyphae. I can't quite tell from the photo (even under magnification) if its clustered over undissolved granules of moss killer/feed, or even over seed you may have laid - excessive amounts of granular products, under very damp conditions, do sometimes grow this type of mould over the top. It may also be a side effect of the product 'eating' the moss. I note you say you spread seed - if you did that just after using the mosskiller/feed, it may be that the seed will not germinate - it is usual to leave a gap of 4-6 weeks (depending on the product used) before seeding after using similar products, so the hyphae may be associated with seed going mouldy. I don't think it will cause problems to the grass that's growing there already.

13
What are the factors for lawn health?
9
How do I fix the worst lawn on the street?
5
Is there a clean alternative to top soil as lawn topdressing?
3
For a new lawn, are mixed soils worth it?
5
How to thicken grass
4
Lawn repair - Heavy moss, damp.
8
Should I mow the lawn during a drought
4
Poor quality Lawn.
9
What are these small white balls that appeared on the soil in my greenhouse?