What chemicals react with greenhouse plastic and cause it to turn white?

I have a small PVC hoop house that I built last winter and plan on using again this winter. I found out first hand, then read about it later on, that the plastic used for greenhouses will react with PVC and turn white. Since I've already invested in the PVC, and it's a much cheaper alternative to metal pipe, I'm trying to come up with a way to isolate the plastic from touching the PVC.

The options I've come up with so far are to use some type of tape (felt, electrical, clear duct tape etc.) and apply it to the outside of the hoops where they come in contact with the plastic. My purlins are attached on the inside of the hoops so I don't need to worry about them. The felt shouldn't react since I've seen this sold on greenhouse supply websites for just this reason, but what about the tape? Are there any other low-cost options I'm missing?

The design is changing a bit the second time around, but this is what it looks like from the inside. As you can see very little PVC actually comes into contact with the plastic covering. The plastic I used was from Green-Tek which I think is really Dura-Film Super 4 from AT Films and it's what I plan on using again this year. 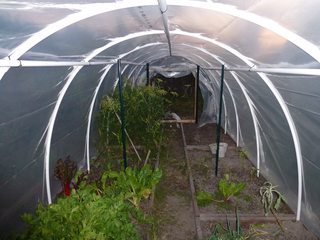 The UV stability of PVC aside I chose to use a roll of clear weather sealing tape from Frost King. This is used to seal windows which means it's not going to react with the greenhouse plastic I'm using. I've applied it to the top of all the hoops and will see how it fairs over the winter compared to last year without it. This is the roll I picked up 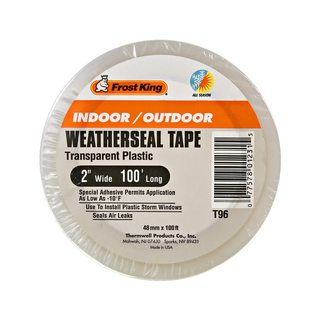 Update on 8/29/14: It's now been almost two years since deciding to use this product. My PVC structure has remained setup in the garden the entire time with this tape on it. I've had no issues with it coming undone, cracking, or turning my plastic white (aside from the general wear marks from wind which are much less than that of the chemical reaction). The structure has been up for a total of three years and the stability of the PVC looks to be no different than the day it was setup.

Not the answer you're looking for? Browse other questions tagged greenhouse or ask your own question.

10
Glass vs plastic greenhouse covering: pros and cons
8
Is drainage important in Greenhouse beds?
12
What is this thin-stemmed plant with narrow leaves in an aquaponics bed in my greenhouse?
2
What type of plastic covering would be good for a heated greenhouse in the winter?
4
How can I tell if my greenhouse plastic film is facing the right direction
1
Are these aphids that I've found in my indoor greenhouse and trying to figure out what this caterpillar like creature is?