What is causing curled leaves on different varieties of citrus?

Is anyone able to identify this disease / pest? We have this on several citrus of different types including an orange, grapefruit, lime, and a mandarin orange. 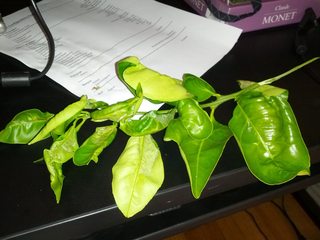 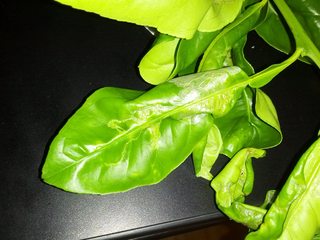 My first thought was that it could be snails as some of the blighted area almost looks like it has snail tracks around it. I don't see snails around the trees, but they might be attacking at night.

This is in San Jose, California.

UPDATE Aug 15, 2015: Still same problem. Doesn't seem to be killing the tree though.

This is likely the work of the citrus leaf miner. More details can be found here. The key identifier is the squiggly tracks on the leaves. This moth and it's larvae can be found on all ages of citrus trees but the damage is more noticeable on younger trees.

If you feel that you have to try and control this pest these are the recommendations:

For the homeowner I would recommend cultural practices and pheromone traps or no action over chemical controls.

Not the answer you're looking for? Browse other questions tagged diagnosis leaves citrus or ask your own question.

9
What is causing curled and deformed capsicum and chilli leaves?
4
How to cure sticky citrus leaves?
3
How can I cure citrus leaves that have brown dots?
1
What is happening to my citrus trees?
4
Why does my mandarin tree (Citrus reticulata) have yellow leaves with speckled bottoms?
1
Citrus with spotty yellow leaves
1
Composting Citrus Leaves
1
Can I graft a citrus using two different techniques simultaneously?
2
What is causing brown flecks on my mint leaves?