How to improve container gardening on a concrete surface

While visiting a restaurant next to where I work (to get scraps/waste for my chickens) I was shown their gardening attempt behind the restaurant. Their goal was to have some produce for the kitchen right out the back door.

It looks to me like most of the plants are suffering from the heat. And I suspect the soil, roots and containers are being baked.

I suggested to them to fill the voids around the containers with straw/hay to moderate the temperature.

Again, their little "garden" is on cement which is surrounded by blacktop. I'd say they have about 100 to 150 square feet of garden space.

This is in southern NY/Long Island

I'll take a picture when I can to show the issues of the plants.

Does anyone have suggestions on how to improve the container gardening? They want to have access to some produce right outside their door.

I suppose one piece of advice is to just stick with herbs - they have a better chance of succeeding in that environment. 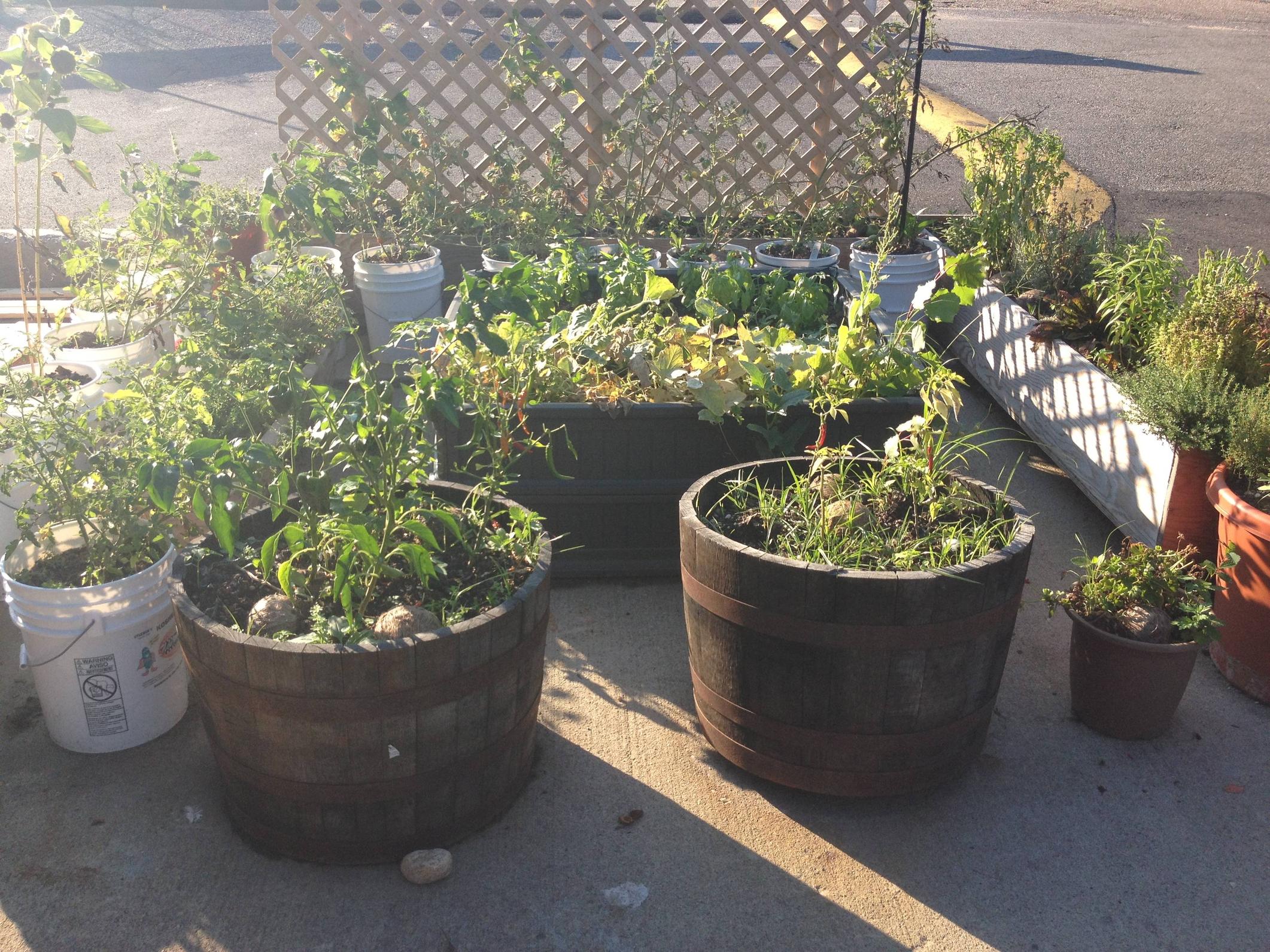 You're probably right, the containers are being baked by hot sun, especially standing on hard surfacing like concrete, which holds the heat. Some remedial arrangement of the containers would certainly help; moving them close together, or as close as possible, or grouping them, so that the plants have sufficient room with good air circulation, but are close with other plants, helps because the transpiration of each plant helps with the one next to it, creating a bit less moisture loss.

The other thing I'd suggest is that the containers are stood on something which raises them slightly off the concrete, enabling air to circulate beneath. Just an inch or so will do it,though it doesn't matter if its more, and will create better drainage conditions. Because the next thing to recommend is a good soaking with water, directly onto the compost/soil in the pots, not on the plants themselves, morning and evening when the weather is hot, and a hosing down of the concrete during the middle of the day to cool the hard surface down, more often if possible. This advice obviously assumes that the containers do have drainage holes which are not blocked. Feeding should obviously still take place, but not necessarily every time watering is carried out.

The situation you describe should be fine for eggplants, peppers and tomatoes - the heat will certainly be good for ripening fruit - but ensuring a good water supply is critical. Given that temperatures may be too high at times, some sort of shading which can be erected when necessary, and removed when it's not, would be a good idea too. Perhaps erected during very hot weather between the hours of 11 to 3, being removed outside of those hours. Whether this needs to be a permanent structure like a pergola, over which is drawn some tenting or similar material, when its appropriate, or whether several garden umbrellas might do the trick is for them to decide.

I'm not sure I'd recommend the straw around the containers, frankly - straw holds heat too.

Ongoing, it will be necessary to renew the soil in the containers periodically, depending on the crops being grown. Most herbs will be fine in the same soil for a long time, but crops like solanums can develop soil pests, so occasional soil change may be necessary.

UPDATE 30 August: Now I've seen the photo, the other advice I'd offer is to get better containers - ones that are a minimum of 18 inches deep and as wide as possible. Squares or oblongs will 'fit' together better too. The larger the containers, the better the plants will grow, and they'll dry out less quickly too. Trying to water that disparate array of small 'pots' must be a real pain - I can't even tell what's growing in them currently. Some of them appear to be buckets which, unless someone has drilled holes, don't have drainage. I'm also wondering what they'll do with the compost/soil when it needs to be changed...

Yes the hay will restrict air movement between the pots.

Definitely add some drip watering: Pots could dry out within a day - so even regular watering by an employee could be a problem.

Is it possible to erect some shade or partial shade? Especially in the direction of the blacktop as well as the full sun. The shade would help to deflect heat radiated by the black top.

Not the answer you're looking for? Browse other questions tagged container-gardening or ask your own question.

5
How deep a container do I need for my Kangaroo Paw?
3
Recommended Gardening books for Toddlers?
2
Dwarf Tamarillo Pruning and Care
3
Right container size for two eggplants together
6
sequoia seeds germination, and first “planting” of sprouts method, in which container?
6
Reuse of soil in a container garden?
1
Fresh cowdung and baggase in lasagna gardening
4
How to convert garden fertilizer dosage to container dosage?
0
How to grow water forget-me-not (Myosotis scorpioides) in a container?