What can I do to help my spindly plant?

I have a houseplant, which has a label which says 'Iresine' (I'm not sure what species, as Google images finds various different versions including some that look like bushes, and Wikipedia says it's a genus rather than a specific type).

It's several years old, and it's rather spindly and tends to lean to the point of tipping over without support. I want to help it, but I'm not knowledgeable on these matters. I did attempt to prune it at one point (a year or more ago, I think; I cannot really remember).

A couple of photos: 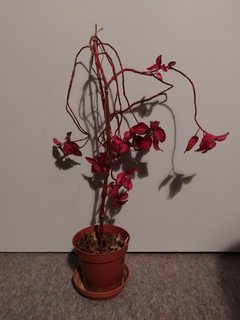 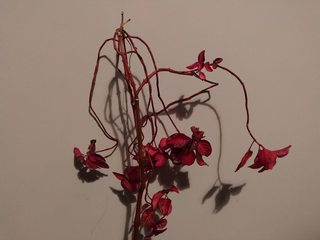 The plant itself is approximately 40cm in height.

Aside from its leaning issues, I'm also concerned about how to improve its health and longevity. I've no idea how long it can potentially live for.

In terms of my options, I'm guessing I could moving it to a larger pot, and/or support it with a stick/pole of some kind? I've also tried rotating it on the window sill it rests upon (so that it will try to grow towards the sun in opposition to the direction it leans in) Is there anything else I can do to help it?

Someone has suggested to me to take a cutting and start over, dumping the old plant, but it has, I confess, sentimental value to me so I am loath to do this unless there's no hope for it at all.

It looks like Iresine herbstii, but it's got very leggy and badly needs cutting right back and maybe a slightly larger pot. These plants respond well to cutting back and it's usual to do this annually or biennially in spring; it should form a bushy plant with more than one main stem when it regrows.

Turn it out of its current pot and check if its rootbound - you will see a solid rootball with perhaps roots coiling round the outside if it is. If that's the case, get a pot the next size up and some new potting soil and repot into the new container. Assuming you're in the northern hemisphere, cut it down to about 3 or 4 inches now, water well, and stand it somewhere away from heat sources with bright daylight - some sun in winter is fine, but it will not appreciate hot sun through a window in summer.

You can try rooting the softer parts of the top stems; cut off and discard the main, hard stem and make cuttings of the leafy parts and some stem about 6 inches long, inserting them into moist perlite in small pots, or into seed and cutting potting soil, see here under propagation https://www.guide-to-houseplants.com/iresine-herbstii.html

Not the answer you're looking for? Browse other questions tagged houseplants plant-health indoors plant-care or ask your own question.

5
Should I Repot a Tall and Spindly Jade Plant?
5
Help me identify and save this plant
6
How can I help this plant?
3
Why is my cactus getting long spindly arms
2
Help! What is wrong with this Coleus? Overwatered? Underwatered?
2
Could you help me with the name of this plant?
1
Can anyone help me diagnose issues with my rubber plant?
0
What can I do to save my homegrown pineapple plant
4
Need help saving plant!